Dancing with the Stars: RTÉ freezes on nervy night as screens go blank

Review: ‘I had an absolute ball,’ says ‘Mrs Brown’s Boys’ star Eilish O'Carroll as she leaves

Eilish O’Carroll has become the first celebrity to be eliminated from Dancing With The Stars 2019. Video: RTÉ 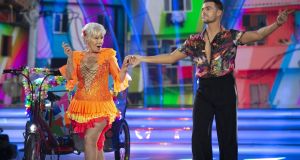 Amid tears, hugs and a bonus studio blackout – cheers RTÉ! –  Eilish O’Carroll has become the first celebrity to be eliminated from Dancing With The Stars 2019.

“I had a ball, an absolute ball,” says the Mrs Brown’s Boys star after her ejection by public vote. She is then invited to perform one last time with her partner Ryan McShane. Or is she? The screen fades to the credits just as she is starting her literal swan dance and it’s good night Eilish.

So that’s that for the plucky O’Carroll at the end of a nail-biting contest (by the end I’d chewed through my own nails and had started on other people’s). Surviving to cha cha another day are the other two bottom-placed celebs, Peter Stringer and Demi Isaac Oviawe, who may consider themselves lucky to still have access to the facilities at the DWTS studio in Bray.

O’Carroll does herself few favours with a flat samba to the even flatter accompaniment of Baby Spice Emma Bunton’s Eso Beso (that was your first mistake Eilish).

“Especially in the second half it ran out of steam for me,” says judge Brian Redmond, who elsewhere enthusiastically advocates a “bum tuck”. “I’m glad Ryan brought his bike tonight but I hope you’re not on your bike later on tonight.” A score of 12 all but seals her fate.

With the competition under way in earnest week three is distinguished by a number of  nervy performances –though the biggest freeze is from RTÉ, as the screen cuts to black (well blue) 90 minutes in.

“Just bear with us for another minute or two and we should be able to return shortly,” says the announcer – the equivalent of the “leaves on the track” announcement you hear when your train is idling outside Heuston for 40 minutes.

Still, not even technical flubs can detract from the tension. This is the moment Dancing With The Stars truly comes alive as blood finally enters the water and the participants face the threat of a swift heave-ho.

Flashback to a time when the TV signal would regularly go...and you’d be left with the test card or an apology on screen. Or a cartoon. Used to happen all the time. I’d forgotten all about that. #DWTSirl

The shortlist of possible winners meanwhile continues to grow. Telly gangster Johnny Ward demonstrates his versatility with a melancholic performance – though Redmond calls him out for pushing the envelope too far with a foxtrot seemingly lacking both “fox” and “trot”. “A foxtrot was supposed to be a foxtrot. It was way too contemporary for me. Don’t short-change me again.” He sounds more upset than anyone reasonably should be about a foxtrot’s foxtrotty-ness.

“I’m all for creativity,” chimes fellow judge Loraine Barry, though the stern glitter in her eyes suggests she isn’t actually all for creativity. Still, Ward’s chutzpah pays off to a degree and he motors on with a score of 19.

“This was a ridiculously raunchy rumba from start to finish,” says judge Julian Benson. “The chemistry was wonderful.” The 20 she receives feels all but inevitable.

That said being said, Redmond sounds a note of ambivalence, complaining Hagan might have benefited from “more squeeze through the hips”.

But early favourites no longer have the field to themselves. Performing the obligatory tango is Cleila Murphy. “This was a fiery passionate tango, the actress came out on you and your performed it,” says Barry as the former Fair City star roars to 21.

She isn’t the only previously unremarkable dancer to demonstrate a noted improvement. Also breaking through is TV presenter Maireád Ronan with a “fabulous” charleston that scores 24, placing her top of the leaderboard.

In the battle of the sporting stars, former Dubliner footballer Dennis Bastick and partner Valeria Milova are praised by Redmond for the season’s best cha-cha  – it is very qualified praise – and are rewarded with a score of 17.

That sets him ahead of former rugby international Stringer. The ex-Munster player’s enthusiasm is unmistakable. Yet it’s a bit of a fumble at the try-line as he and partner Ksenia Zsikhotska muddle their way his through the quickstep to Wake Me Up by Avicii. Their first mistake, you suspect, was performing a footstep to a techno anthem inspired by Mumford and Sons.

Down among the honest strivers, Darren Kennedy’s jive draws an effusive pat on the head from Loraine Barry (“you did your best”).  “What was the biggest concern?” wonders presenter Nicky Byrne. “Jiving, the steps or your hair.” Look, at least he’s stopped banging on about Peter Stringer’s bread intake.

Kennedy scores a screamingly average 14 and could easily have found himself in the bottom three. The swish celeb is obviously having fun and has been taken to the competition in the correct spirit. Still, without a distinct improvement you imagine his weekly commute to Bray will shortly be coming to an end.

Holly Carpenter, for her part, dons a full petal jacket for her waltz which culminates with her looking moodily at a pink flower. It isn’t completely successful, as the model’s jitters overshadow her poise. “I would love you to take on a character each week and put it into the dance – fuse the dance with the character,” says Benson. “It will help you relax a lot more.”

The clear crowd favourite of the evening is funnyman Fred Cooke whose bright red dungarees and frozen smile make him look like a human Teletubby during his charleston. “It was funny, it was quirky, it was animated,” says Barry, wisely reading the crowds enthusiasm. He scores a blockbusting 23 and the audience is treated to the cheers of a clown.

Independence and the shadow of home rule: the legacy of the Irish Parliamentary Party
4

TV guide: 28 of the best shows to watch this week
6

Dancing With The Stars 2019: Jennifer Zamparelli and Nicky Byrne’s zero chemistry a turn-off
8