‘Dancing with the Stars’ review: RTÉ puts on the glitz

Some sparkle, but plenty of padding in Irish version of ‘Strictly Come Dancing’ 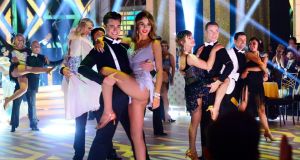 Puttin’ on the Ritz was the opening group dance in ‘Dancing with the Stars’ on Sunday night on RTÉ One. Photograph: Cyril Byrne/The Irish Times 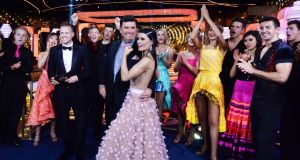 Des Cahill and Karen Byrne with Nicky Byrne after their foxtrot performance during the Dancing with the Stars opening broadcast from Ardmore. Photograph: Cyril Byrne/The Irish Times 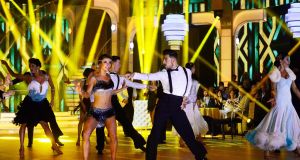 A routine to an Irving Berlin classic kicks off ‘Dancing with the Stars’ on RTÉ One. Photograph: Cyril Byrne/The Irish Times 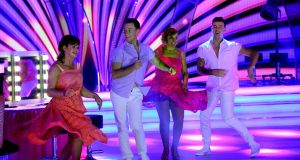 Teresa Mannion and Katherine Lynch perform during ‘Dancing with the Stars’ on RTÉ One. Photograph: Cyril Byrne/The Irish Times

“Get your glitter on,” or don’t, get your slippers on, it’s Sunday night, and it’s the very first RTÉ episode of Dancing with the Stars, LIVE! from Ardmore Studios.

Here are your capable hosts Amanda Byram and Nicky Byrne descending the golden staircase onto the dancefloor of doom.

“Celebrities” of Ireland, don’t ruin this. You CAN do a lascivious rumba in front of your granny. You CAN jive without turning it into a limp-armed reel. You CAN wiggle your bottom on national television - who’s to say RTÉ’s newsreaders haven’t been doing that below the desk for years?

Notwithstanding the shiny floor show track record of Shinawil, the production company behind this, the familiar theme music elicits a prayer to the goddess of flicks and kicks that Dancing with the Stars is not going to a) stink and b) tarnish the television wonder that is its parent show, Strictly Come Dancing.

Puttin’ on the Ritz

The celebrities join in, and the early signs point to a tale of two Desses (Desi?), with sports broadcaster Des Cahill revealing an early glimpse of his “Dad dancing” and comedian Des Bishop hitting his cues with a showbiz grin the size of Jupiter.

It’s just “the boys” dancing tonight - “the girls” will be going backwards in high heels next week. And even though there are only five male contestants, RTÉ has somehow managed to stretch this out over two hours, which feels a bit of a cha-cha challenge even for ardent Strictly fans.

Bishop dives in with a moody tango and judge Loraine Barry, deeming his performance intense, says she could imagine doing it with him - the tango, that is. Up second is Big Brother runner-up Hughie Maughan, who does a cheery cha cha cha and is complimented on his twerking by judge Julian “Captain Sparkle” Benson.

Shimmying Kerry footballer Aidan O’Mahony is next with the GAA-themed salsa the nation has been waiting for since 1922.

The studio looks like it’s on fire, and while O’Mahony isn’t quite as sizzling as Byram suggests, things are definitely warming up. “The Kingdom is very impressed with your moves - and your tan,” Byrne tells him later.

Then Des Cahill makes Ed Balls look like Fred Astaire by valiantly trying to foxtrot. When judge Brian Redmond tells him his pivots were amiss and he shouldn’t have bothered with the heel kicks, he’s being kind, yet somehow “Des C” manages to score more than Hughie. It’s a fix!

Last to dance is hairsprayed ex-boybander Dayl Cronin, who does a hip-hop take on the Charleston and deservedly takes a clear lead with 23 out of 30. Cronin’s band HomeTown had a hit with Cry for Help, apparently, but if anything he’s the one most at ease with himself in this spangly cavern.

There’s a frenetic professionals’ dance and some long recaps to pad out a running time inflated by copious ad breaks, then we have some windbaggery courtesy of the judges, who seem a touch lacking in the one-liner department. Week One is wrapped up with a group dance from the female contestants, whose proper turn it is next Sunday. Teresa Mannion only looks slightly terrified.

The original Strictly thrives when despite the odds, despite the whole TV-show artifice, the couples conjure up cracking moments on the dancefloor, assisted no doubt by years of secret dance classes.

There’s no evidence of this magic in the first episode of Dancing with the Stars, but perhaps by the end of the run, the nerves will have calmed and the skill levels will have climbed high enough to make the show a more compelling view.

Where there’s a format in the television industry, there’s a “format bible”, or a list of the things each international version must do to satisfy the licensing agreement, in this case with the BBC, and not trash the brand.

Sadly, the presence of a live band in the studio wasn’t one of the stipulations, which detracts from the sense of occasion, but elsewhere, the production values (lighting, costumes) are decently glitzy and, crucially, there are no big fluffs.

Verdict: Kee-eeep dancing (as they say on Strictly) and viewers just might keep viewing.