Dana has been a deeply political, conservative, contentious figure

TV review: ‘Dana: The Original Derry Girl’ was a cosy portrait of a demure singer 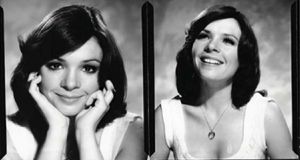 Dana: the demure portrait of itself that theocratic Ireland keeps in the attic

It’s 1970 and sweet, hair-clipped Dana is singing this song to all of Europe. A softly spoken Derry schoolgirl beloved by nuns, sitting precariously on a high stool and devoid of “limb-notions” (dance moves), she is the demure portrait of itself that theocratic Ireland keeps in the attic.

It’s a strange sentiment for a love song – “You are so unspecific to my mind that all objects and concepts evoke your memory” – but I’m not sure the nation that sent Dana out to sing it had a very concrete idea of love in the first place.

The North was erupting into violence. Other young women were being placed in institutions and their babies forcibly adopted. On the plus side, we won the Eurovision Song Contest. It was the first time we’d won anything and we narrowed our beady little eyes and decided to get some EU structural funding and maybe build a Bono.

Dana: the Original Derry Girl (Monday, RTÉ 1), a documentary created with the cooperation of Dana Rosemary Scallon, takes us right back to this world and then decides to glide frictionlessly over its surfaces.

It’s interesting to see just how big a career Dana had in the UK in the wake of her Eurovision win – much of that output is forgotten – but the programme makers decide not to delve too deeply into the belief system of Dana herself. This arguably makes sense during the early days of her pop career – which is enlivened by high-profile telly slots and a challenging throat operation – but by the 1980s, when she is singing for the Pope and building a career in ideologically-rooted American Christian music, it feels like a terrible lack of interest.

When she goes into politics, first as a presidential candidate and then as an elected MEP, the lack of policy detail in the programme is actively annoying. We get a lot about the how of her politics but not the why.

We see the unprecedented way in which she garners a presidential nomination by canvasing county councils in her first presidential campaign. We’re shown snippets from a combative Vincent Browne interview, but largely to demonstrate how shaken Dana is by it (we hear his exasperated questions, but not much of her answers).

We learn about the upsetting indecent assault allegations against her brother – who was later acquitted – that emerged during her second presidential campaign. We’re told that for many conservative Catholics she was an important figure, but the programme makers never get her to talk about what she believed or what she currently believes or what she thinks of Ireland in 2020 (I mean, in 2013 she was calling for a referendum to reject any loosening of the country’s restrictive abortion laws).

It does her a disservice. Dana was a contentious figure when she was a politician and if you’re taking her seriously, she should be a contentious figure. She stands for something, even if this documentary seem to see her political career as a dramatic deviation from the pop one to which she has returned.

She was a politician who, for all her apparent softness, vigorously represented conservative Eurosceptical Catholics opposed to abortion and social change. She cared deeply about these things. She can’t suddenly be rebranded as a gently-political light entertainment figure for the purposes of a documentary.

By not getting her to discuss her beliefs, they’ve made her as vague and wispy as the subject of her Eurovision song… “Brunch bars and coffee cups, Dustin Hoffman and spoons… All kinds of everything, remind me of youuuuu.”