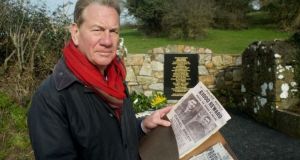 The sight of Michael Portillo roving the landscape, scarf bunched up, greatcoat flapping majestically, yet without a steam train in sight, is massively disconcerting. But of course the truly weird thing about Hawks & Doves (RTÉ One, Wednesday) is that the former British Conservative Party hardliner turned Great Railway Journeys presenter has disembarked in rainy old Ireland, a creaking folder of British government documents pertaining to the War of Independence under arm.

The big idea behind this gripping and enlightening series is that Portillo – yes, yes, Michael Portillo! – has popped over to share British perspectives on Ireland’s bloody push towards statehood from 1918 to 1921. Oooh, it’s a bit transgressive having a former arch-Tory read back our own history to us, isn’t it? Slightly naughty even. Come on, Mr Portillo, say “Dáil” again. You know we like it.

The novelty of Portillo thundering around Fermoy and Limerick Junction aside, Hawks & Doves feels like excellent history. That is to a degree due to the host’s turbo-powered avuncularity. He walks into a room and shakes an expert’s hand and it’s like watching a one-man Charge of the Light Brigade. No wonder Lucy Worsley has to don Elizabethan hats all the time. How could she compete otherwise?

Portillo’s particular focus is the tension between war-mongering “hawks” and conciliatory “doves”, as the then British government slowly woke up to the fact that the trouble in Ireland was more than just a few locals creating mischief.

Hawks & Doves does well, too, in looking beyond the usual suspects of Irish higher learning. Portillo sits down with historians from Queens in Belfast, Dublin City University and Dundalk Institute of Technology. It’s almost as if there is academic life in Ireland beyond UCD and Trinity (alas and infuriatingly the new talking heads persist with the lamentable “historical present” tense).

It helps that the British hierarchy in Ireland was quite the gallery of cads, any of whom could have been played by Stephen Fry dressed as General Melchett from Blackadder Goes Forth. Their knowledge of Ireland and of Irish people – even when living amongst us – was desultory and mired in stereotypes.

Hawks & Doves also goes beyond most RTÉ docs with its impressive production values. Drone-mounted cameras give Portillo licence to stand in gloriously green Tipperary, where hostilities formally began, and seemingly speak to the heavens, like Tim Robbins in the Shawshank Redemption. Whizz-bang camera work similarly transforms present-day Fermoy into something out of Game of Thrones. Even if you adore Fermoy you will agree that this is rather an accomplishment.

Portillo is fantastic value, with his plummy intonations and huge wizened brows. He looks like a caricature of a caricature of an ageing Tory boy. His chronicling of Black and Tan atrocities and of Bloody Sunday crackle with Shakespearean pizazz.

In episode two, he will move on to Treaty negotiations and a mild divergence of views between Collins and De Valera. As history it will no doubt be succinct and accessible. As melodrama it may well prove unsurpassable.