Ciara Kelly tries to stir the autism controversy without offending anyone. She fails

Radio review: Ray D’Arcy shows all politics is personal, while Ciara Kelly ties herself in knots 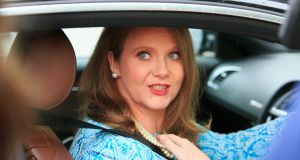 Senator Catherine Noone: her comments this week were a talking point on the Ray D’Arcy Show. Photograph: Gareth Chaney/Collins

If you’re explaining, you’re losing, according to the old political adage. To which one could add the corollary: if you’re being discussed on an afternoon radio chat show, you’re in abject rout.

That’s at least judging by the on-air reaction to the week’s big election talking point, Senator Catherine Noone calling Taoiseach Leo Varadkar “autistic” during an election canvass in Dublin. When a programme as genially inoffensive as The Ray D’Arcy Show (RTÉ Radio 1, weekdays) finds room for an election story alongside more customary items on DIY reality shows, you can be sure that somewhere a party spin doctor is spewing profanities at hapless underlings.

1 Bank leaked my loan request to family who tried to rip me off
2 Why Sinn Féin will not call the State by its name
3 What evidence is there that the IRA still controls Sinn Féin?
4 Spread of coronavirus triggers European travel curbs
5 Ryanair and Aer Lingus monitor impact of coronavirus on travel to Italy
6 Costa living: ‘Move home to Ireland? I’d hate it’
7 Brazilian father to be deported days after daughter’s birthday
8 Ireland suffer Twickenham torture yet again as England dominate
9 England 24 Ireland 12: How the Irish players rated at Twickenham
10 Eddie Jones’s comments have already provided Irish team-talk for 2021
11 Anti-social chants bringing sour note to schools rugby
12 Eastern Europe faces a demographic crisis of its own making
13 Anti-Irish bigotry in Britain has not gone away
14 England held all the aces in defining battle of the breakdown
15 I’m happy I went vegetarian. I have no desire to eat meat again
16 TV View: Sunday Bloody Sunday . . . Not Bono’s fault but Boy, that was Bad
17 Parties brace for ‘carnage’ in scramble for Seanad nominations
18 Could a product from Lidl or Aldi change your life?
19 Drug dealer loses codes for €53.6m bitcoin accounts
20 UK’s immigration plan geared ‘to catch headlines’
21 Dancing with the Stars: Shock exit for teary-eyed Sinéad O’Carroll
22 Maureen Dowd: For the White House parasite, all restraint has gone
23 30% of admitted patients discharged within 24 hours ‘crazy’
24 L’Arche sex abuse: ‘We didn’t know he had a darker side’
25 Steve Coogan: ‘Come Out, Ye Black and Tans is two fingers to the British’
26 Una Mullally: Fine Gael and Fianna Fáil must ask ‘what do we stand for?’
27 Boris Johnson's new immigration regime will damage much more than industry
28 My husband is acting like an extra child in the family
29 Would you kill one person to save five? Depends if you’re a millennial or not
30 Clare houses surrounded by water evacuated as rainfall warning
31 Portraying Sinn Féin as a dangerous party is a political strategy
32 Court to deliver judgment on Graham Dwyer’s phone data
33 Coronavirus: Austria restarts train services with Italy
34 The words many a journalist dreaded hearing: ‘This is Stephen Joyce’
35 David McWilliams: Germany needs a new business model
36 Over-competition in sport is bad for children’s mental health
37 Exposed to coronavirus: How Irish business is coping with fallout
38 Homes in Co Clare village turned to islands as Shannon flooding continues
39 Archbishop: Sex abuse of women by L’Arche founder ‘reprehensible’
40 The risk of contracting mass hysteria is much higher than coronavirus
Real news has value SUBSCRIBE