Director says RTÉ did not have funds to develop series, now an international sensation 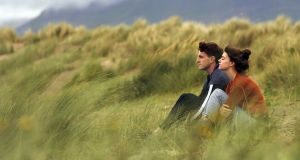 Lenny Abrahamson said RTÉ did not have the financial resources to develop the adaptation (above) of Sally Rooney’s novel Normal People, which has became an international sensation. Photograph: Enda Bowe/Element Pictures

Film director Lenny Abrahamson has said he and the producers of Normal People took it to the BBC first because of the “chronic situation in terms of funding with RTÉ”.

Abrahamson said RTÉ did not have the financial resources to develop the adaptation of Sally Rooney’s novel, which has became an international sensation.

Normal People, which was first screened online on BBC Three, has broken downloading records in the UK with more than 23 million download requests and 16.2 million requests for the whole series. There were four million downloads in Ireland for the 12-part series. It also aired on BBC One and RTÉ One.

It has been sold in all the major European television markets, in the US, Canada, Latin America and even in China.

The series was funded by BBC Three and the streaming service Hulu in association with Screen Ireland. It was acquired by but not funded by RTÉ, which will therefore not benefit financially from its success.

The director said: “We are so starved across various parts of the arts ecosystem that we are forced to take really great things like that outside the country.”

He told RTÉ’s Arena programme that the series, which was mostly filmed in Tubbercurry and Dublin, had brought benefits to Ireland, but the direct financial benefits from the series will go elsewhere.

“Unless we are prepared to make sensible investments which are not very large in the scheme of things in the national broadcaster and the arts generally, we won’t realise the benefits.”

Abrahamson is part of the Arts Council’s expert advisory group on the arts in Ireland which has recommended that the arts will need more than €50 million in direct government support just to get through the next two years.

It is currently developing Rooney’s first novel Conversations with Friends with the BBC in a similar format to Normal People, as a 12-part series.

Normal People producer Andrew Lowe, of Element Productions, has warned that the film and television industry will not be able to restart unless the Government steps in as the insurer of last resort.

Mr Lowe told The Business programme on RTÉ that countries such as France, the UK and US have stepped in to provide insurance for productions, as private insurers have vacated the market following a deluge of claims arising out of the Covid-19 pandemic.

Mr Lowe, who also chairs of Ibec’s audiovisual sector, said Screen Ireland has been talking to the Department of Culture, Heritage and the Gaeltacht about providing insurance support.