2016 Revisited: Too much TV glamorises ‘going out for the night, having sex with people, then dissecting it the next day over avocados’. Stefanie Preissner set out to be more realistic 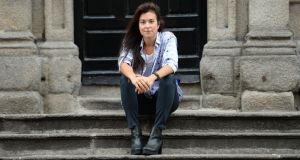 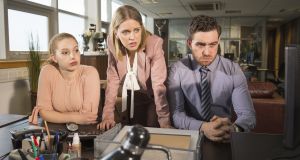 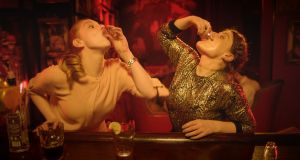 “Amy Huberman just brought me coffee,” says Preissner, and then explains: “Amy Huberman is my assistant and brings me coffee now.”

Preissner is wearing a brightly coloured Adidas jacket (“I’m hoping Adidas will start sending me free ones.”) She is the very funny writer and performer of several stage shows, including the acclaimed Solpadeine Is My Boyfriend, and this is her first foray into television writing.

Huberman is, in fact, not her assistant but is playing a part in the show, and we are on set in an old bayside building in Dún Laoghaire. Huberman tells me that her daughter was here earlier. “She asked me was everyone asleep and was that why we had to whisper.”

Next door is made up to look like the office of a fancy hedge fund where Aisling, one of the main characters, who’s played by Seána Kerslake, works. (Huberman plays her boss.)

Preissner and I are in a room set up for catering; several platters of hot food are awaiting a hungry crew, at least half of whom are women. Apart from Preissner and the mainly female cast there’s the director, Cathy Brady, and the producer Ailish McElmeel.

Huberman notes how nice it is to be working on a set dominated by women. “Though it should just be the way it is,” she says. “It shouldn’t stand out that it’s a female-led thing.”

“It came from me watching television and not seeing myself being represented,” says Preissner, who comes from Mallow. “I don’t see sex or entertainment or drinking or any of that culture represented in the way I experienced it.”

What does she see instead?

“I see a real fetishised version of youth, a real glamorised version of going out for the night and having sex with people and then meeting up for brunch the next day and dissecting it over avocados . . . The idea that people have sex with strangers and then lean naked out the window above the IFSC and smoke a cigarette – that’s just not how it works. That’s not my life. But it’s not Love/Hate either. It’s not like we’re shooting up in back alleys and then having sex in a bin.” She laughs. “Though that’s more like my life, to be honest.”

‘I wanted to be Garda commissioner’

She shows me a photograph of herself in a Garda uniform she wore for “an Alfred Hitchcock walk-on part” in Can’t Cope, Won’t Cope, and she recites the Garda alphabet for me: “alpha, brava, charlie, delta, echo . . .” She does the whole thing. “Yeah, I’m basically a guard. I’m a qualified guard.”

Instead of being a garda Preissner took drama and theatre studies at University College Cork and then went to the Gaiety School of Acting, where they encouraged her to write her own material.

“I’m a millennial,” she says. “So I assumed that Steven Spielberg would be ringing up, saying, ‘Stefanie, you’re amazing. I want you to be in all my films.’ I assumed they’d be knocking on the door. Which they were. For my TV licence. Which I couldn’t afford. But I have one now, because it’s a fireable offence at RTÉ not to have a licence.”

Is it really? “Yes. You have to have a TV licence. And I have one!” she adds loudly, so a nearby press officer can hear.

So she wrote plays for herself to act in, witty, honest shows in verse, named Solpadeine Is My Boyfriend, Our Father and It’s My Party Conference and I’ll Cry if I Want To. They were all, for the most part, autobiographical, which Can’t Cope, Won’t Cope is not, she stresses, even if it does occasionally touch on things that happened to her or people she knows.

Her family are not in the arts. “They’re businesspeople. My grandmother was a chemist and opened her own business at a time when women really didn’t do that. They’re real business minded, and I have a little bit of that, which helps me not to be bankrupt.”

What do her family think of her career?

“They tilt their heads and ask me questions like, ‘Are you still doing the drama?’ They look at me like I’m pulling rabbits out of a hat in the Olympia Theatre and leave me to it.”

Television came her way because McElmeel saw Solpadeine Is My Boyfriend and introduced her to the director Cathy Brady. “They clicked to an embarrassing level over their shared love of Celine Dion, ” says McElmeel. “Then Stef sent a one-pager to me saying, ‘This is what I want to do,’ and it was all about two girls and the youth experience.” She laughs. “ ‘Youth experience.’ You’d swear I was 400.”

It’s an important project for McElmeel, who is a director with Women in Film and is committed to getting more Irish female voices on television. “That was part of my sales pitch to [RTÉ],” she says. “You’re under-representing a huge part of your audience. People want to see themselves on screen. They don’t just want to go, ‘This is me if I lived in Williamsburg and was a bit hip and cool.’ ”

McElmeel couldn’t get over Preissner’s writing ability. “She’s so quick it’s frightening. The heightened bit of her brain is operating at another level.”

“Nothing exciting or necessary happens after 8am in my life,” says Preissner. “So I took those hours off and lobbed them on to the next day. It started as jet lag, but it really works for me.”

That’s when Leonard Cohen gets up, I say. “Yeah, we see each other jogging along the canal.” She thinks about this and says, “I’d never jog at five in the morning. You’re going to be the person who comes across ‘the body’. You’re going to be ‘the passing jogger’.” Then she adds, “Also, I don’t jog.”

She’s a shy person, she says. Unlike the characters in Can’t Cope, Won’t Cope, she doesn’t go out partying much any more. She doesn’t drink. She stopped eating sugar 18 months ago.

“I turned my body into a temple, and now I can be really judgmental. I stand by the sugar at Starbucks and say, ‘Enjoy your early grave,’ to the people passing me by. All my friends who I used to be dying with on a Sunday are now up at seven, eating avocados and drinking smoothies.”

So what does she think her show is like?

“People say, ‘This is about girls, so is it like Girls? If you want it to be like Girls it’s like Girls. I haven’t seen Girls.” She stops and corrects herself. “I think I’ve seen the pilot of Girls. They ask, ‘Is it like Sex in the City?’ It is if you want it to be. It’s set in a city, and there are small amounts of sex in it.” She pauses. “A friend of mine said to me the other day that it’s like The Country Girls. And I said, ‘What the hell is The Country Girls?’ and she said, ‘Edna O’Brien’.” She adds, deadpan: “I was straight on to Wikipedia.”

Kerslake is, “controversially”, from Dublin, not Cork, but Preissner helped her with the accent. “She wanted a very specific Cork accent,” says Kerslake. “I think the accent helps me and feeds into my character big time.”

Preissner, who was planning to leave the set ages ago, is still here, watching each take unfold. She thinks of new ideas while watching the actors, she says, but rewrites are banned. The scripts are all formatted by computer and are printed on different-coloured pages. First drafts are white, redrafted pages are pink and green. “Our scripts look like rainbows, and everyone hates me,” says Preissner and laughs.

The show has changed a little in the production. She grieves lost lines, “crackers” that were cut for practical reasons. There was a celebrity cameo they never managed to pull off. “I’m interested in that way drunk Irish girls deal with even minor Irish celebrities,” she says. “There’s a real overfamiliarity. How many people a week must shout, ‘Go on, go on, go on,’ at Pauline McLynn?’ I wrote a scene like that, and I thought it was hilarious, but then you have to ask the person to do it.” Off the record she lists the people they asked. “They all said, ‘Absolutely not’.”

Does she spend much time on the set?

“I don’t stay around, because I tend to distract people. I get chatting and laugh at the scene being shot, because I’m highly entertained by myself.”

She says a DVD-extras commentary for Can’t Cope, Won’t Cope would just be her laughing at her own jokes. “That’s why I don’t stick around. I’m not very useful.”