Breeders: This is a portrayal of parenthood warts – or screams – and all

TV review: Martin Freeman has an authentic take on the undignified reality of child-rearing 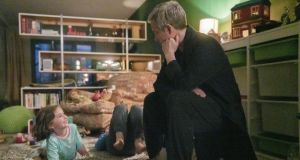 Breeders: Martin Freeman plays Paul, a creative executive at a trendy charity who is sleepwalking angrily through life

Martin Freeman has made a career out of playing an especially edgy sort of Everyman. He was the angriest ever Dr Watson, opposite Benedict Cumberbatch in Sherlock. His Bilbo Baggins seemed peeved even before Gandalf and the Dwarves stomped all over his lovely Hobbit carpets. Now he’s back as another chap-next-door with a menacing twinkle in his eyes.

The amazing and revolutionary idea behind Breeders (Sky One, 10pm) is that it is a portrayal of parenthood warts and all. Or, at least, screams and all. The dark secret it has to share is that mothers and fathers aren’t perfect and that they sometimes lose their temper with their kids. Occasionally they may shout and swear.

That sounds like stating the obvious. But how often is the undignified reality of child-rearing honestly depicted on TV? Not often enough, especially in comedy. So Freeman, who created Breeders with The Thick of It’s Chris Addison and Simon Blackwell, is here to do us all a favour and confirm that (a) parenthood isn’t a perpetual lark and that (b) sometimes it’s really, really hard not to blow your top with your children.

He plays Paul, a creative executive at a trendy charity who is sleepwalking angrily through life. In his mid-40s, he’s being eclipsed at work by millennials (a fate every Gen Xer dreads). His parents (Alun Armstrong and Joanna Bacon), meanwhile, aren’t getting any younger even as they grow considerably dottier.

But it’s the kids who are really doing him in.

Seven-year-old Luke has a mortal terror of the house burning down. Paul, for his part, frets that their four-year old daughter, Ava, would do better in life if they got her into a higher class of feeder school and that his wife, Ally (Daisy Haggard), is too blase about their offsprings’ education.

Adding to their woes, Ally’s hippy dad – Michael McKean of Spinal Tap and Better Call Saul – has just turned up and is banging on about the evils of capitalism and the wonders of a forage-based diet.

A lazier comedy would have fun dissecting Paul and Ally’s marriage and painting it as ruinously dysfunctional. Breeders takes the more authentic route of showing us a couple sleepwalking through a cosy yet lustreless union. It’s a lot more honest than having them at each other’s throats all the time. Where would they even find the energy?