Little Britain, The Mighty Boosh, The League of Gentlemen already removed from Netflix 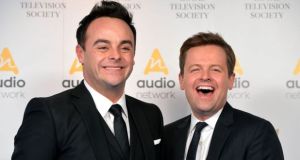 Ant and Dec have apologised for a segment of Saturday Night Takeaway in which they impersonated people of colour using blackface. File photograph: Dominic Lipinski/PA Wire

Ant and Dec have apologised for a segment of Saturday Night Takeaway in which they impersonated people of colour using blackface.

The pair darkened their skin and wore prosthetics for the undercover sketch, in which they pranked famous faces while in disguise.

The presenting pair said they would not make those sketches today and had requested ITV, which broadcasts the show, remove them from their streaming catch-up service.

A statement on their Instagram and Twitter accounts said: “During past episodes of Saturday Night Takeaway we impersonated people of colour in the Undercover segment of the show.

“We realise that this was wrong and want to say that we are sincerely sorry to everyone that we offended.

“We purposely stopped doing this several years ago and certainly would not make these sketches today.

“We had already taken steps to ensure footage was taken down and have again recently confirmed with ITV that these segments, and any other historical content that could cause offence, does not appear on either the ITV Hub or the Saturday Night Takeaway YouTube Channel.”

The pair wore blackface in 2003 as they dressed up as two fictional Jamaican women, Patty and Bernice, to prank Emmerdale cast members.

And in 2004 they dressed up as two Japanese girls, Suki and Keiko, using make-up and exaggerated accents.

It comes after Little Britain and The Mighty Boosh and The League of Gentlemen were removed from Netflix after all three came under fire because of the use of blackface in some sketches.

Walliams sported black make-up and a large afro wig to play the overweight black woman Desiree DeVere. Lucas also used blackface to play Pastor Jesse King, who said he was “from the ghetto” and spoke in tongues to cure the sick.

The Mighty Boosh’s Spirit of Jazz and The League of Gentlemen’s Papa Lazarou characters were both played by white actors wearing blackface, and the Guardian understands they were seen as problematic by Netflix.

Papa Lazarou – described as a “blacked-up ringmaster who calls everybody Dave” – was inspired by an old landlord of the show’s creators, Steve Pemberton and Reece Shearsmith. The character was accused of harking back to the “ugly legacy of minstrelsy” but Shearsmith has always denied the character was supposed to be a black man.

The Spirit of Jazz character is supposed to be the ghost of fictional jazz musician Howlin’ Jimmy Jefferson and was played by Noel Fielding in the series.

Black Lives Matter protests have taken place around the world following the death of unarmed black man George Floyd in the US after a police officer knelt on his neck, prompting greater scrutiny over the use of blackface in the media. –Guardian