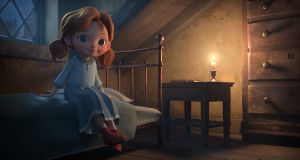 Is there a trick to cooking Christmas dinner in minutes rather than slaving over a chopping board and a hot oven for hours? Order it from a deli or supermarket is one way to do it, for sure.

Failing that, Donal Skehan promises to help cut the prep – by hours! – with a simplified menu (we assume he doesn’t mean turkey nuggets and frozen chips, or cheating by avoiding the turkey-and-ham extravaganza altogether).

Also on the festive table from RTÉ One, RTÉ2 and RTÉ Player are an animated short film spinoff of Angela’s Ashes, a documentary on Fairytale of New York, and two brand new Mrs Brown’s Boys specials. It’s a bit of a mammy special from the state broadcaster.

One of their sparkles this year is Angela’s Christmas, described as a “funny and heart-warming” half-hour animated film  by acclaimed Brown Bag Films. It’s based on Frank McCourt’s only children’s book, which was inspired by a story his mother Angela told him from her own childhood.  McCourt won the Pulitzer Prize for his best-selling memoir, Angela’s Ashes.

The film features voices of Oscar nominated Ruth Negga (Loving, Preacher) as Angela’s mother, and Lucy O’Connell (Oscar nominated Song of the Sea) as Angela. Set in early 1900s Ireland, Angela’s Christmas  will depict little Angela’s journey in  CG animation.
Also on the festive table from RTÉ One, RTÉ2 and RTÉ Player are an animated

Staying on the mammy theme, the broadcaster features mother-and-son double-act Baz Ashmawy and Nancy in a quest to see Pope Francis at the Vatican, in Baz and Nancy’s Holy Show.

Shane MacGowan calls Fairytale of New York “the nastiest Christmas single ever”; the song is is 30 years old this month, and a new documentary looks back at the making of Fairytale with songwriter MacGowan, who is 60 on Christmas Day.

Paul Simon, Billy Bragg, Christy Moore, Imelda May and Bob Geldof are among the musicians and songwriters interviewed, along with former members of The Pogues.

Other RTÉ seasonal highlights include: the Senior Moments comedy show, where seniors prank unsuspecting youngsters; Bridget & Eamon, where Bridget works out Eamon would be worth more dead than alive; a one-off Celebrity Home of the Year features ex-rugby player Mike Ross, presenter Eoghan McDermott, writer Melissa Hill, broadcaster Lorraine Keane and senator David Norris submitting their homes to judges (including new judge, architect Patrick Bradley); and At Your Service – To the Rescue visits the village of Bruff, Co Limerick to fit out Ireland’s first purpose-built neighbourhood for people living with dementia.

In Carols from the Castle on RTÉ One on Christmas Eve, Mary Kennedy is joined by a cast that spans ages and the whole island in the magnificent halls of Dublin Castle for festive music including Ralph McTell, MayKay, Rita Connolly and the RTÉ Concert Orchestra, conducted by David Brophy.

In Pat Shortt’s Music from d’Telly, Pat rummages through the RTÉ archive for Christmas music favourites. In Christmas Then and Now Sinead Kennedy also delves into archives, and finds John B Keane reminiscing on his Christmas childhood in Kerry and actor Des Keogh discovering a 200-year-old festive tradition in north Co Dublin.

Each day in December, RTÉ will release a new 60-second film on a special website, www.rte.ie/christmas, that documents Christmas in Ireland today, from a range of perspectives. Featuring people young and old, from all around the country, and from a range of faiths and background, the films will showcase stories of Christmases past and present. Joyful, touching, inspiring and sometimes sad, a selection of the interviews will form the core of a two-part documentary, The Secret of Christmas, on RTÉ One.

Rory O’Connell brings a Christmas flavour to How To Cook Well with elegant dishes for cooks who want something different. In the lead-up to Christmas week, Today with Maura and Dáithí is live from Cork with celebrity chefs, wine experts and music.

Christmas wouldn’t be Christmas without soaps, and RTÉ’s Fair City promises a rollercoaster of emotions (after a difficult first year of marriage Kerri-Ann receives an unexpected surprise; as Damien and Caoimhe continue to clash over Saoirse, Damien sends the community into chaos as he takes matters into his own hands), and Albert Square is set for an explosive yuletide in EastEnders.

And a run of Harry Potter films air across RTÉ2 during Christmas week, plus a special hour-long Harry Potter: a History of Magic on New Year’s Day.

In the RTÉ Sport Awards 2017 Darragh Maloney and Joanne Cantwell celebrate Irish sport and celebrate the awards Sportsperson, Team and Young Sportsperson of the Year.

Presenter Jacqui Hurley teams up with Ruby Walsh and Shane Byrne for a Christmas edition of Know the Score, joined by the Dub who scored the winning point in the All Ireland Football Final, Dean Rock; MMA coach, John Kavanagh; star of the Irish Women’s rugby team, Jenny Murphy; and the recently retired Irish soccer superstar, Kevin Doyle.

Ireland’s Fittest Family – All Star Coaches looks behind-the-scenes of this year’s final, as well as an extended hanging tough challenge. And the all-star coaches – Donncha O’ Callaghan, Davy Fitzgerald, Derval O’ Rourke and Anna Geary – share what they really think of each other.

The Imelda May New Year’s Eve Special includes The Corrs, The Strypes, Finbar Furey and Gavin James, and the RTÉ Concert Orchestra to ring in the New Year, followed by The New Year’s Eve Countdown Concert with Kodaline, live from Custom House Quay in the heart of Dublin.

The RTÉ News Review 2017 looks back on the stories that defined the year.

And aside from the live TV offerings, RTÉ Player is loaded with box-sets for the season. The Irish drama collection includes The Clinic, Proof and Damage along with the entire first series of Striking Out, while Home & Away fans can binge on this years’ specials All or Nothing and Revenge.

Reality collections include Salon Confidential, Fade Street and Popstars and plenty of comedy with Hardy Bucks, The School and Bridget & Eamon.

A Beautiful Day in the Neighborhood: A tremendous film a great young director
2

Man with a Movie Camera review: power to The People
7

The first World War: the aftermath
10