Analysis: High stakes and human frailty for RTÉ One

In a competitive television market, the channel needs its big investments to work 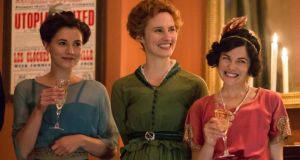 There is pressure of a different kind on the only two post-watershed dramas on the schedule: Clean Break is notable for being the first RTÉ drama in some time to be set in a small town, while Rebellion has obvious “national conversation” credentials. Photograph: Patrick Redmond

Increasingly, this is true of all of television. Drama might have the highest costs-per- hour – leaving a bad taste when they flop – but in a country that RTÉ One controller Adrian Lynch calls “one of the most competitive television markets in the world”, every programme must either pull in a decent audience or tick some public service box.

The Ray D’Arcy Show, for example, needs to be a hit to justify the cheque written to its presenter. The Saturday chat show has the difficult task of mopping up guests The Late Late Show has either missed or rejected, while not looking like that’s what it’s doing.

There is pressure of a different kind on the only two post-watershed dramas on the schedule: Clean Break is notable for being the first RTÉ drama in some time to be set in a small town, while Rebellion has obvious “national conversation” credentials.

Gogan was full of praise for Clean Break writer Billy Roche, a playwright marking his TV debut, saying his four-parter demonstrates “a strong sense of empathy and an insight into human frailty”, while also being, you know, entertaining. “It’s actually quite good,” a senior RTÉ executive assured The Irish Times.

Past controversies have served to obscure the tendency of RTÉ current affairs output to be both hard-hitting and well-watched – a fact that has proven inconvenient for some very powerful figures in Irish society. A budget rise in the order of 50 per cent has now been approved for its investigations unit, so that it can bring more stories of “significant national impact” to air.

Elsewhere, in the entertainment and lifestyle genres, there looks to be a mix of good, fresh ideas (on paper, at least) and the same old, same old (comfort television classics, to be less pejorative) – and which is which will depend on who you ask.

“If RTÉ One was a football team, I think we would be Barcelona, but with the budget of Bohemians,” said RTÉ managing director of television Glen Killane.

In places, its line-up lacks what is known in football parlance as “strength in depth”. But RTÉ One will doubtless remain the most-watched channel in Ireland by some distance, with the aid of some bona fide talent and, ideally, a minimum of own goals.