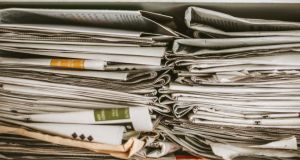 The initiative includes the sharing of impactful pieces of journalism from around the world on worldnewsday.org. Photograph: Getty

World News Day 2020 falls today, September 28th. The global campaign has been organised to highlight the role of fact-based journalism and professional newsrooms in helping citizens make sense of the world.

A key element of the initiative is a one-hour webcast featuring Dr Anthony Fauci, director of the US National Institute of Allergy and Infectious Diseases and a global leader in the fight against Covid-19, which will be available via a sign-up link on worldnewsday.org at 11pm Irish time. Sign up here.

Dr Fauci will appear with other newsmakers and journalists on the webcast, which is hosted by CNN’s Chief Media Correspondent Brian Stelter, to recognise the work of journalists.

David Walmsley, the Irish-born editor-in-chief of The Globe and Mail in Toronto, Canada and creator of World News Day, said: “Amid the cacophony of debate, this is a day to pause and listen to our global audience. It is a day to reaffirm support for journalists who are part of society, not outside it. And it is a chance to hear from our readers about what journalism means to them.”

The initiative includes the sharing of impactful pieces of journalism from around the world on worldnewsday.org. The Irish Times has contributed two opinion articles by columnist Fintan O’Toole, and Crime Correspondent Conor Gallagher’s award-winning story of the trial of “Boy A” and “Boy B” for the murder of Ana Kriégel in 2018, with an accompanying video.

Spearheaded by the Canadian Journalism Foundation, the World Editors Forum and the World Association of Newspapers and News Publishers, World News Day brings together more than 100 journalistic organisations, including The Irish Times.

Other participants include BBC News, CNN, the New York Times, the Washington Post, National Geographic, the South China Morning Post and The Globe and Mail in Toronto.

World News Day is also supported by Newsbrands Ireland, the representative body for Irish news publishers. In a statement to mark the day, Ann Marie Lenihan, chief executive of NewsBrands Ireland, said: “Covid-19 has highlighted the critical importance of trustworthy news sources in an era of misinformation and disinformation.

“We are proud that Irish news publishers have been to the forefront in keeping the public accurately informed since the crisis began. Our journalists have worked hard to consistently deliver accurate, fact-checked information and news analysis to the Irish people, while dangerous falsehoods spread like wildfire on social media.”

Newsbrands Ireland called on the Government to undertake three commitments to secure the future of Irish journalism:
(1) Complete “the long-overdue review of the Defamation Act and reform Ireland’s draconian defamation laws”
(2) Tackle “the dominance of tech platforms in the digital advertising market”
(3) Reduce VAT to 5 per cent on newspapers and digital news products

“Without a vibrant local and national news publishing industry, going forward, who will report on the courts, the Oireachtas, the county councils, local and national sporting events, raise awareness of important societal issues and campaign for change?” asked Lenihan. “Google? Facebook?”

Joe Dante: You have to give a movie time to age, like wine
8

Realist versus sceptic: Two takes on the climate crisis
9