The MBA premium: opening doors to interviews and prospects

MBAs offer students a valuable perspective on management and business 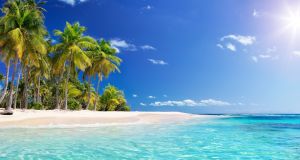 Can an MBA lead to early retirement on a tropical island? Photograph: iStock

A wealthy businessman visits a small Pacific island where he notices a fisherman landing his catch. Impressed, he asks him how long it took.

The fisherman says he was at sea for about two hours and when asked what he does with the rest of his day he says he spends it with family and friends, socialising late into the night.

“But if you complete an MBA, invest your time, develop a business plan and scale your operation you could have a fleet of boats and great wealth within 15 years,” the perplexed businessman implores him.

“And then what?” asks the fisherman. “Well,” the businessman thinks, “you could retire to a small tropical island and spend all your time with family and friends.”

The joke illustrates a common debate about the nature of success, the best ways to attain it and whether the end ever justifies the means.

But even when there is a need to poke fun, there has for a long time been a premium on higher education and MBAs (Masters in Business Administration) have been the gold standard of certification in a hardnosed business world.

They are expensive, exclusive and valuable – used by individuals to scale the final rungs of an increasingly slippery career ladder and by companies to isolate talent. In the highest reaches of the corporate world, among its most successful people, MBAs are no joke.

For employers, they offer an indication of several attractive qualities in a candidate – graduates spend a considerable amount of time studying corporate and business structures outside of their own field of expertise; they learn how to solve problems; and, perhaps most crucially, they study the invaluable art of leadership.

“You probably need a leader rather than just a manager,” explains Claire McGee, senior executive for innovation and education policy at the employers lobby group Ibec.

McGee argues that while MBAs are not essential – there is, for example, a parallel argument for PhDs in upper management and a need to ensure not everyone has been pressed from the same mould – their importance has not been diluted or overtly damaged by a proliferation of courses and graduates.

“I think they are still very highly regarded; an MBA will give an individual that basic business training,” she says.

“While they may have various technical qualifications, this will complement that to give them an overarching management perspective.”

This is the key rationale of undertaking an MBA. Most students – especially those in part-time courses best suited to full-time employees with considerable experience – are looking to augment their particular skill set with an overall understanding of business. As well as being a signal of intent and demonstrating knowledge of management applications, the MBA’s influence is quite straightforward: it opens doors to job interviews and prospects that would otherwise often be too far from reach. The demand for such finessing – from both employers and students – is also the reason MBAs have been multiplying over the decades.

In Ireland today there are at least 10 courses on offer across a range of third-level institutions, differing in approximate costs from under €6,000 to almost €35,000.

The value of and thinking behind MBAs – as an extension of broader business schools – can be traced through their history. The first such masters has been accredited to different places, primarily Harvard Business School and Dartmouth College, and such early brand association is possibly a part of the reason they are regarded as impressive qualifications.

The US continues to dominate the market. In 2014, Fortune magazine reported the MBA had become the country’s number one choice of post-graduate qualification.

“The remarkable growth of the MBA – largely due to its widespread acceptance by employers and the almost assured return on investment of the degree – has been fairly steady during the past half century, making the degree the most successful educational product of the past 50 to 100 years,” it reported.

That paragraph encapsulates much of the thinking in Ireland. Those looking for a stand-out MBA here are most likely to consider either UCD or Trinity College Dublin, the country’s highest ranked and most expensive.

The UCD Smurfit Business School MBA is ranked 89th in the 2019 Financial Times global MBA list and 74th on the QS University rankings. Trinity College Dublin is at 96 on the latter.

According to the UCD Smurfit Business School, graduates typically benefit from salary increases of 63 per cent within three years and 90 per cent secure jobs as a result of the qualification within three months.

“There are two kinds of applicants that we see – one is the career escalator where they are consolidating what they already know. And very often they can be in quite senior roles but have very limited capacity to interact with the financial people or the accounting people,” explains Prof Cal Muckley, who heads up the programme.

The second type, he says, “are medics, architects, actuaries, veterinary surgeons and they are looking to switch away from the technical to a managerial focus”.

The course helps build confidence in these areas, to fill in gaps so someone with a considerable professional background or potential might “aspire for those leading roles at board or just below board level”.

As for its value to employers, Prof Muckley talks about producing business people with the ability to interact competently across a variety of facets within an organisation while keeping a variety of stakeholders satisfied – the dream job candidate. This is established through engendering leadership, networking and problem-solving skills. If it all has the tendency to veer toward “business-speak”, it whets the appetite of potential employers.

The approach is designed to challenge students – who are placed in companies and who face managerial scenarios – and acclimatise them to operating in high-expectation environments.

“We really are putting these MBA students into a kind of pressure tank. They really are very busy when they are here.”

Trinity graduates can expect to benefit from similar outcomes. According to data from the university, 44 per cent receive a salary increase within one year of completion and there is an average three-year “payback” duration on fees. It also says that 65 per cent of those who go through the MBA have changed jobs within the following three months.

Prof Amanda Shantz, MBA director at TCD Business School, says the two types of students they typically encounter are the functional experts who know what they want from the course and where they are going, and those planning a career “360” – already successful in their particular field, it is time for something completely different, possibly starting their own company.

What makes a student stand out? “For me it’s being curious . . . someone who has a passion for knowledge, for understanding their new environment,” Prof Shantz says. “These are [the]people who really get me excited as a teacher.”

As with many other MBAs, Trinity has a focus on building leadership and networking skills, finding students who can contribute, hold their weight in a room and emboldening them to do so. And yet quite often the reasons for pursuing MBAs are far more straightforward.

“A lot of candidates tell me when I ask them what motivated them to do [the course]that they are not going to get the promotion if they don’t do an MBA. An MBA has a lot of cache,” Prof Shantz says.

That is certainly true – MBAs occupy a dual reality, both as qualifiers and as branding exercises. Whether a candidate seeks to learn or to simply become more visible in a crowded field, the programme offers both outcomes simultaneously.

It is a scenario that has led to some cynicism and scorn – MBAs do not attract universal praise among those who know the territory, particularly when they have grown exponentially in number and the volume of graduates along with them.

One recent Dublin-based MBA student reflects that the course did not represent value for money but was more a reflection of “qualification inflation” – what was once the gold standard of business competence is now the bare minimum requirement in challenging for career elevation.

“The only people who benefit is the education sector. I think that an MBA was thought of as a set of tools and insights to help an executive C-level person; to give them the tools to aid them in strategy and planning for a medium to large enterprise,” the graduate says, requesting anonymity.

“Now it is seems like it is only a way to help you get that team leader role.”

Writing last year, Prof Martin Parker, a veteran business school lecturer of 20 years and a long-standing critic of the system, made his views obvious in the title of his latest book – Shut Down the Business School.

Noting commonplace criticism of the model from within faculties themselves, he wrote: “At the end of it all, most business-school graduates won’t become high-level managers anyway, just precarious cubicle drones in anonymous office blocks.”

It is the potential reputational damage such opinions represent, as well as a rapidly shifting work and corporate environment – tech company employees setting their own working hours and dispensing with traditional office settings – that make innovation essential to the survival of the MBA course. It is an important lesson for educational institutions and it is not lost on them.

If not for the specific reasons outlined above, both UCD and Trinity have identified ways in which a changing world can be embraced by their courses.

Referencing a recent article, Prof Shantz says Ireland is emerging as a “new California” in tech terms, and there is a need to reflect that. Trinity has introduced a “Leading in a 4.0 World”, applying the familiar and reliable leadership ethos to an emerging landscape.

The UCD Smurfit Business School’s innovation is not all that different – a financial economist by trade, Prof Muckley has pushed data analytics to the fore of his institution’s MBA, a move he believes will cater to a growing demand in the business world. Adapt or die is a familiar cliché in a universe where “survival of the fittest” is a mainstay of thinking. MBAs seek to do just that and employers will be watching.

“If management is still as important,” muses Professor Muckley, “then I think the MBA is important.”

Love/Hate is returning to RTÉ on Friday nights. Why did we love it so much?
2