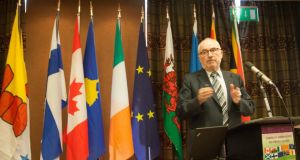 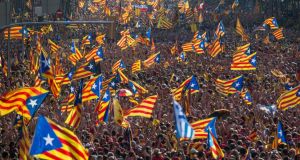 Demonstrators march during a pro-independence demonstration as part of the celebrations of the National Day of Catalonia on September 11, 2014 in Barcelona, Spain. photo: david ramos/getty images

What caught your attention in the amendments on the Official Languages Act 2014?

I read the entire document, and maybe I dare too much to make recommendations to another country, but I think my experience can add to it. In head four, it mentions which documents should be published in Irish. I would say, every one of them. If it were to be done electronically, it would cost nothing. All documents from public bodies should be available in Irish.

Civil servants and the number of them who should be obliged to know Irish is mentioned as well. Should every civil servant be obliged to have Irish, as they were in the 1970s? I would say yes, and why don’t you go back to the same system?

Language rights are not for the civil servant or the Government but for the citizen. If you do not provide civil servants in positions where they can offer services in Irish, you are preventing and in some ways prohibiting the use of Irish. Put the emphasis on the citizen.

Every civil servant in Catalonia must have Catalan, at level C or higher, and thus every citizen can use Catalan and Castilian with the State and nobody is made to change language.

With regards to the extension of language schemes, I heard the politicians speaking about an extension to seven years? Why? You would have enough time to prepare administrative systems within three years.

The final head that caught my attention was number 13, where it is written that private companies on contract from public companies should provide services in Irish. Why wouldn’t every company, private and public, who provide services to the people, English speakers and Irish speakers, provide those services in Irish? I am talking about the menu in a restaurant, the barman, private health companies, call centres and shops. That is my frank opinion.

What are the differences between Catalonia and Ireland’s cases and what can we learn from each other?

Never ever forget that Irish is an official State language. Catalan is not. Irish is even an official language of the European Union! Catalan is spoken in an area where 13 million people live and is not recognised because we do not have a state. 95% of the population understand Catalan, 80% speak it and 60% can read it because every subject is taught through Catalan in every school. After two years, we begin Spanish and after four years we begin English.

The second recommendation is to prevent anyone from harming language rights. It is a civil right. No administrative body should say “Irish doesn’t exist here”. The language right should be there for everyone in the Republic.

Does the Madrid Government accept the Catalan approach?

The Education Minister is trying to bring in a law that would change things for us. He said, while discussing his bill: “We must Spanisize the children of Catalonia.”

The children of Catalonia are taught through Catalan. Even the children who are native Spanish speakers, they learn Catalan at school. The system makes sense; they have three languages by the time they are 14 years old. The results in our schools are better than schools in monolingual regions.

Many oppose the Government because of these recommendations. They gave €6,000 to every child who chose Spanish-medium education. It is very tricky because there are no public Spanish-medium schools. There are private English schools and Spanish schools and parents in those schools are asking the government for the grant. That money comes from Catalan taxpayers.

Most of the parents in Catalonia are in favour of Catalan because it provides employment opportunities and other such things for their children.

You mentioned money; what would you say to those who claim language rights cost too much?

I asked when I came here: “is State money spent on publicising the great English-language works that came from Ireland?” I was told it was. Irish people are very proud of their writers and spread their works all around the world. Now that costs money, but no one questions that cost. You cannot start a war over funding a people’s culture. Only if you are crazy and demanding huge sums of money, but the people of Ireland are not demanding that.

It is clear that Catalan is a strong community language. What steps will be taken to strengthen it more?

Our major weaknesses at the moment are in the areas of film and computer games. They come from the United States and other foreign places. The major Hollywood companies won’t spend their money on dubbing their films into minority languages.

We have to oblige the major companies to provide Catalan versions as they provide Spanish versions.

At the moment, only 5% of the films dubbed are in Catalan; Spanish dubbing is done on the other ones. There is a new law coming in four years time whereby 50% of the films in the cinemas of Catalonia will be in Catalan.

What would you like to see happening for Catalan in the next five years?

The Spanish state doesn’t recognise the country’s minority languages. A lot of visitors come to Spain and they think of bullfights and Flamenco and Spanish. They don’t know about Galicia, The Basque Country or Catalonia. We have the same percentages with regards to languages as the Swiss where 70% of that population speak German, 20% speak French, and the rest speak other minority languages. In Spain, 70% speak Castilian, 20% speak Catalan and the rest speak Galician and Basque. What I would like to see is official recognition for all of Spain’s native languages.

What can the Irish people do to strengthen the Irish language as a community language?

Protect it instead of fighting over it. Do not turn it into a partisan political issue, it is a political issue of course but don’t allow it to be used as political tool by political parties. All parties should come together to protect the language. I commend the organisers of the convention in Dublin this week, Conradh na Gaeilge. It should be discussed in a social way like that more often. It should be used socially more often – in the County Hall, in school – and the Gaeltacht should be expanded.