Coalition parties come to the céilí with empty hands 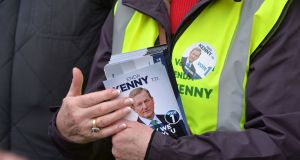 Fine Gael are regarded by many Irish speakers as having a less-than-stellar record on the language over the past five years, and judging by their election manifesto it is not a reputation they seem unduly concerned about.

In fact, the only real boast their manifesto makes in relation to Irish is that they managed to find an extra €1m for Údarás na Gaeltachta following last November’s budget.

To be fair to the party, I found it equally difficult to recall any other achievements they might have mentioned, and I may well have been paying closer attention to government policy on Irish than either of the government parties.

They could have, I suppose, if only by way of some light relief from the jargon and plámás, have added that they made Gaeltacht Minister Joe McHugh learn Irish.

Straight off we learn that Fine Gael is “committed to systematically implementing the 20-Year Strategy for the Irish language” which, sadly, has become manifesto-speak shorthand for “we couldn’t really think of anything to say, so we’ll give them the old line about the 20-Year Strategy”.

There is not a single tangible promise of extra resources or funding. Not a red cent, or a pingin rua even. Would they, for example, manage to spirit another cool million for the Údarás from down the back of the fiscal couch in 2017? We are not told.

If, as we have heard during the election campaign, ‘auction politics’ is back, well nobody bothered to inform whoever came up with Fine Gael’s Irish-language policy.

What we get instead is an insipid cocktail of vague promises and rehashed proposals, most of which seem to have been randomly plucked from the Department of Education’s excellent draft policy for the reform of Gaeltacht education, which was published last year by Labour minister Jan O’Sullivan but unfortunately did not make the cut in time for the election.

Ten of Fine Gael’s 13 Irish-language proposals deal with education, but, remarkably, there is no mention of Gaelscoileanna.

As for that draft policy for Gaeltacht education, Fine Gael seems to view it as no more than a useful source for election manifesto filler.

They do not even say whether they would implement the policy if returned to power.

The party’s Irish-language policy contains a worthwhile pledge to introduce a scholarship scheme for students from disadvantaged areas who want to attend summer colleges, but mostly it comes across like a particularly dull and incoherent departmental discussion paper.

Take, for example, the following: “We will engage with the Department of Arts, Heritage and the Gaeltacht and Údarás na Gaeltachta to clarify the role that education will play in complementing the language planning processes taking place in accordance with the Gaeltacht Act 2012.”

I have read this line a few times, and I think that what we are essentially dealing with here is a promise that someday somebody will contact somebody else and ask them something along the lines of “what’s the story with education in this language-planning process anyway?”

Elsewhere, Fine Gael boldly states that Gaeltacht schools “should be allowed to practise total early immersion through Irish for a period of up to two years”.

The only problem with this is that the Department of Education has already officially sanctioned total early immersion through Irish.

Fine Gael’s coalition partners even claim credit for the move in their manifesto, also released this week.

This week, in an interview on TG4, Enda Kenny, answered a question about the implementation of the 20-Year Strategy by talking about attracting cyber-security companies to the Gaeltacht.

His party’s Irish-language policy is equally confused, a cut-and-paste job devoid of any coherent arguments or concrete proposals.

The Labour Party manifesto’s first commitment in regard to Irish is the jaw-dropping guarantee that they will “Protect Irish language and culture, and our place in the world”.

And all Conradh na Gaeilge were asking for was a senior minister, an Oireachtas committee, and a bit of extra funding for Údarás na Gaeltachta and Foras na Gaeilge!

Like their coalition partners Labour blithely ignores those three pre-election demands and fails to commit any extra funding apart from a nebulous promise to “allocate more resources to implement the strategy” and a slightly baffling undertaking “to provide funding to Irish-speaking Gaeltacht areas to encourage those without Irish to use the language”.

Surely if those without Irish could be encouraged to use it, then Joan Burton could have been cajoled into accepting that invite to debate on TG4?

Labour would also “continue the growth of Irish-medium education” and “consider the development of second level education through Irish”.

And that is about it from Labour, save one last gallant pitch for our award for General Election 2016’s most ludicrous Irish-language promise: “In terms of public services, we will work to ensure that all citizens can access all government services in Irish.”

Presumably they will also be working to ensure the establishment of global peace and an end to world hunger.

Or at least considering it.