Carreras knows the end of his career is not far off. Ahead of his Dublin show, he talks about the Three Tenors years, beating leukaemia, and FC Barcelona 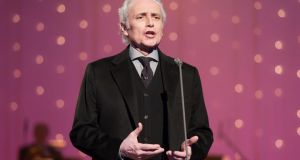 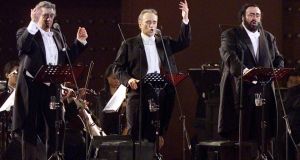 José Carreras as part of the Three Tenors, with Placido Domingo on the left and the late Luciano Pavarotti on the right. Photograph: Chien-Min Chung/Reuters

Barcelona made him. José Carreras took his first operatic steps in the city by the Mediterranean. His early performances, as a boy with a gifted voice, led him from the Sants neighbourhood where he grew up to the grand, elegant surroundings of the Liceu in the heart of the city. There, he made his debut as a boy soprano and began to wonder if this life, of singing and stagecraft, was for him.

“When I was a kid, I was listening to opera and studying music,” he remembers. “I knew what I wanted and I knew what I liked, and I was dreaming about making it happen.

“It was an impossible dream, of course, that of having an international career and to sing everywhere and to work with great colleagues and conductors. At that point, I didn’t know it was ever going to happen.”

But it happened. Carreras was one of the great tenors of his age, a man who mesmerised audiences as a dashing singer with a voice of great lustre, dramatic tone and dynamic intent. In his pomp, Carreras took roles such as Alfredo in La traviata or Riccardo in Un ballo in maschera and put his own stamp on them.

During the 1990s, having fought and recovered from leukaemia, Carreras linked arms with Plácido Domingo and Luciano Pavarotti, and, as the Three Tenors, they took to the biggest stages to transform opera into a cash cow. Millions watched them; millions bought the CDs.

These days, Carreras still sings and tours, although now in concerts and recitals featuring light opera and popular songs rather than operatic performances that fill the schedule. When we meet he is in Dublin Airport ahead of performances in Belfast and Dublin.

Outside, there’s a coterie of people taking care of the business of an international singing star. Inside the room, Carreras is talking about voices, and in particular the voices he heard who inspired and defined him as he sat and marvelled in the Liceu stalls.

“Some great artists, some very good tenors, came to Barcelona to perform when I was a boy, and I got the chance to see and hear wonderful artists,” he says. “But I always had a favourite one, and that was Giuseppe Di Stefano. I can still remember some of his performances and concerts in Barcelona, like in Fedora.

“I always said what I’d love is to give to the audiences the kind of feeling and emotions that I received when di Stefano sung in the Liceu.”

Di Stefano showed Carreras how to take joy from what he did. “We are very lucky, we artists, because our profession is also our passion and our hobby. It’s a joy, and yes, that is the word to describe it. I consider myself to be a very fortunate man and every time I go on stage now, after 43 years, I think I appreciate more and more what I am doing.”

The Three Tenors
To most casual observers, Carreras will always be linked with the Three Tenors. This world-beating combination reached and entertained an audience that had never been interested in classical music or opera before. Some of this audience will have gone on to become opera fans, seeking out other singers and performances.

“The whole thing together was wonderful,” Carreras remembers. “It was a fantastic time. It was fun. I think the reason why the shows and recordings were a success is because the chemistry between the three of us came across to the audience and meant something special to them.

“The special thing was that you don’t get what we had very often. We were three tenors, we were unique. It was different for us and different for the audience. We wanted to do our best and we had been lucky that people liked what we did.”

Carreras points out that there were a couple of reasons why they embarked on the project in the first place. “The most important thing was the three of us wanted to do it. This had not been suggested by a record company or a television show.

“We were all football fans and the first concert was the World Cup final in Italy in 1990. The second reason, and even more important, was that my two colleagues thought it was a great opportunity after my recovery to sing a concert together to show not only that I was back and leading a normal life, but that I was still able to perform and be a professional.”

Carreras was diagnosed with leukaemia in the late 1980s and, although he made a full recovery, his voice and performance changed as a result of the illness. “I sang less opera afterwards,” he says. “I had one career before the illness and another afterwards, so I had to change because of this.

“You can do certain things when you’re younger, when your voice is full, but then you get older. Of course, yes, I have some regrets, but it’s all part of the game. You have to learn from what happens. Maybe my career would have been different, but I don’t know.”

The twilight years
Carreras knows that there’s only a finite amount of time left to walk on stages, air his voice, sing those songs and hear the rich ripples of applause coming from the dark. He has accepted this, which means he gets to enjoy the remaining shows all the more.

“Sooner or later, and I don’t know when, I’m going to have to stop, so I savour more what I can do every night. I don’t know how long more I am going to sing. Maybe a few more years, maybe less. I enjoy what I do and it fulfils me as an artist and as a man. I look back and I can see my professional life has been very intense and very rewarding. I was lucky.”

“But the day I stop singing, I know exactly what I am going to do and that is work full-time with my foundation against leukaemia and try to give some hope to people who are suffering from the disease.”

He will also have more time to follow the fortunes of FC Barcelona. When Carreras says the Three Tenors were football fans first and foremost, he’s not joking. So, what does the singer make of the current team at the Camp Nou?

He smiles. “They are magnificent. Of course, there have been many wonderful teams and many wonderful players at the Nou Camp down through the years. But the kind of football that Barcelona have been playing for the last few years, especially in 2009, 2010 and 2011, has been incredible.”

Then, he pauses as he recalls one particular game. “I am not a specialist but I have been going to football for 55 years, and go to as many matches as I can. I have had great occasions, but that game in 2010 when Barcelona beat Real Madrid 5-0 was special. Not for emotional reasons, not because it was Real Madrid, but because of how Barcelona played. It was really amazing. Better than that is just not possible.”