‘We had the fear when we were asked to dance. Now the fear is leaving dance behind’ 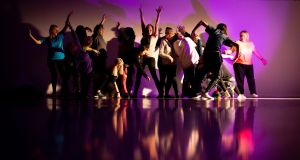 Rehearsing for The River, a contemporary dance work, at Dance House in Dublin. The work involves a group of 20 women mainly from Sherriff Street and Ballybough. Photograph: Tom Honan 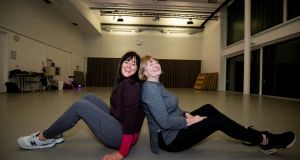 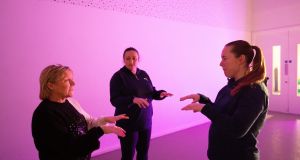 Joan O’Brien, Tracey Scott and Mary Geoghegan. ‘At first I used to only come for the tea and biscuits after,’ says Geoghegan. Photograph: Tom Honan 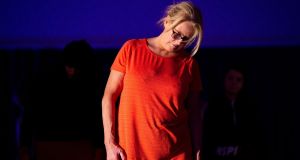 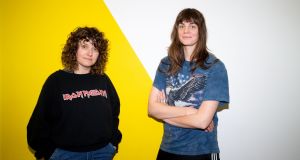 It’s a dark, windy Tuesday evening in Dublin’s inner city and the rain is coming down in sheets outside the Dance House building. Inside, moving like a shoal of fish around a spacious third-floor studio, a group of women have gathered to dance.

They weave their bodies across the room, arms stretching upwards and outwards in the shape of trees. They stamp their feet with purpose as though rooting themselves to the polished studio floor.

They laugh when steps are missed or when someone suddenly declares the experience to be “very emotional”.

“It is very emotional,” says a blond woman from nearby Ballybough, a recent convert as they all are, to contemporary dance. Jackie Byrne is 54, a mother of four children and grandmother to six. This, she says, is where she comes to “be me”.

“Not a mammy, not a granny, not a social worker, not a listener. Just Jackie.”

Sitting on the floor, she shields her face with her hands. She laughs and the women – many of them have been friends for years – laugh with her. Emotional. They’ve heard this one before.

In one corner, there’s a pile of bags, jackets, shoes and rain gear. Amid all the smiles, this is serious business. These women – the group includes a mother and a daughter, women in their 20s and in their 70s – are expressing their lives and experiences in music and movement. And in occasional stifled giggles.

They are in rehearsals for The River, a contemporary dance show which will happen over two nights at the Project Arts Centre in Dublin next month. None of these women had any previous training or, it’s fair to say, interest in contemporary dance.

The women were brought together by Michael Darragh MacAuley, the Dublin GAA player who was working with women’s football teams in Sheriff Street and Ballybough. Now a core group of 17 women from these two areas of the inner city are building something unique together.

The project is also the brainchild of acclaimed Dublin-based Swedish choreographer Maria Nilsson Waller, working alongside musician and dancer Stace Gill of Irish electronic band The Sei. Nilsson Waller and Gill have worked with schoolchildren on dance projects before, which encouraged them to look to other non-professional dancers.

“We wanted to create a folk dance of the area, a tribal dance ... there are a lot of misconceptions about contemporary dance but it’s just another form of storytelling,” says Nilsson Waller.

“They’re incredibly brave,” says Gill of the women, who have split into huddles of three and four to come up with an individual dance move based on an activity from their everyday life. “Ah, I hate when you spring things on us,” grumbles one of the women. The dancers get back to the work, against a soundtrack of minor moans and groans.

“It’s such a radical thing to do,” continues Gill, creative director of D-Light studios in the North Strand. “It’s not just going on stage, but using your body for something that you don’t normally do. You don’t normally dance, like a tree, for example. In Ireland we are not really that free in our bodies. You are really asking these women to step outside of their comfort zone and they are so ready and willing to do that.”

The River is about `female strength and camaraderie, poetic and honest physicality and above all, courage, acceptance and flow'

Over the past six months the women have been undergoing an intense training programme. The River is the “collective expression” of everyone on the team, says Nilsson Waller, explaining that the choreography takes inspiration from the women, their environment, their family life, the Liffey, even the traffic and congestion on the city’s streets.

Gill is the composer and will perform the music live onstage. The River is about “female strength and camaraderie, poetic and honest physicality and above all, courage, acceptance and flow”. Both women credit the show’s creation to the mothers, grandmothers and daughters of the northeast inner city, who they call “the hearts and leaders of these communities”.

The dancers are a mix of passion, jitters and euphoria with a light sprinkling of mortification about their new hobby. Mary Geoghegan, the tea and biscuits fan, is “nervous” about the show. “I feel like a bit of an eejit when we are floating around like trees and leaves but when you see it come together it surprises us all how well it looks.”

“I do like it, but I am completely out of my comfort zone,” says Rose Byrne, a mother of four and grandmother of two. She’s in her 50s and loves dancing – “the normal kind”, she clarifies. She gets embarrassed if she misses a move, but says she is “trying to go deeper into it”.

How is she feeling about the performing in front of their families and friends, their neighbours? “I’m sh**ting it,” she says. “Definitely sh**ting it.”

“Emotional” woman Jackie Byrne, Rose’s sister-in-law, has had an awakening of sorts through her experience with dance. Jackie’s husband died from cancer 12 years ago. She was in “a bad place” which friends helped her through, and says if she’d had dancing then “it would have been a fantastic help”.

“We’ve never done it in our lives, and now we’ve fallen in love with it,” she says. “It taps into things that are going on in your head, it’s like being in another world. Sometimes I get upset while I’m doing it, a good upset, it’s like the dancing leaves you feeling newborn.”

The River has gone beyond the initial premise of a community project, something Nilsson Waller has observed with pleasure. “We were looking for rawness and bravery in the performers, and decided to work with non-professional dancers for this reason,” she says. “These women have brought themselves to it in a way that reached beyond all our expectations, and they have blown us away with their spirits and presence. Already, this project is a victory.”

And while the performance is the ultimate goal, the show will not mean the end of their dancing days, not if women such as Jackie Byrne have anything to say about it.

“The GAA brought us together, the dancing is keeping us together,” she says. “I don’t want it to stop. I want my Tuesday nights to carry on ... all this unwinding and chilling and relaxing and just being us for an hour and a half. We lose ourselves in Stace’s music and Maria’s dancing and the way she gets us into a kind of zone.”

As a Christmas present, Gill and Nilsson Waller gave the group the meditation track they use to relax at the end of each session. It was a hit with the women who now listen to it at home when they need time out.

“We had the fear when Stace first asked us to do the show,” says Byrne, “and now it’s the fear of leaving dance behind. I don’t want it to end.”

Flora Fauna Project presents The River premiere along with Pidgin’ at the Project Arts Centre on March 6th and 7th. projectartscentre.ie