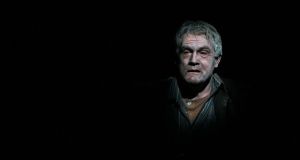 TRAD
Pavilion Theatre, Dun Laoghaire, February 4th-5th; Riverbank Arts Centre, February 6th; Lime Tree Theatre, Limerick, February 8th
In Mark Doherty’s TRAD a centenarian sets out on a voyage of discovery. Son has lived life in the shadow of his father, Da. Trapped in rural Ireland, the opportunities for romance were so slim they could be whittled down to the singular. From a chance encounter, however, Son had a son, whose existence he did not know about until his 100th birthday. Accompanied by the ancient Da, whose physical decrepitude is compensated for by mental acuity, Son sets out to find him. Longford’s Livin’ Dred are finishing up the final dates of their well-travelled, well-received production directed by actor Aaron Monaghan, who draws emotional and physical power from the small ensemble. Seamus O’Rourke, who was nominated for an Irish Times Theatre Award for Best Actor for his performance as Son, is particularly impressive, while Clare Barrett finds comic meat in the minor roles of Fr Rice and Sal. Designer Naomi Faughnan’s set provides a beautiful miniature backdrop, which Suzie Cummins lights with atmospheric subtlety. If TRAD is traditional in its absurdist exploration of Irish themes, its execution by Livin’ Dred feels contemporary and fresh.

Flights
Project Arts Centre, until February 8th; Clapham Omnibus, February 11th-29th
“Flights is not a play about men not being able to articulate themselves,” John O’Donovan writes by way of introduction to the published text of his new play Flights. “It’s not filled with brooding, unsaid feelings. Silence is not their problem; if anything they have too many words. It’s not the inability to speak, but the fact that they are speaking to a world that has no interest in listening that’s troubling them.” For O’Donovan, putting their stories in the public forum of the theatre ensures they get heard. Flights brings together three young men grieving the sudden death of a friend, but they have their own grievances; primarily value in a world where economy is a measure of self-worth. Continuing a long tradition of Irish plays set in pubs, there are echoes of all the great (male) playwrights here. There is rage, weakness, fatigue and apathy, but there is also the evasive, comic banter of men unsure about revealing themselves. Colin Campbell, Conor Madden and Rhys Dunlop are directed by Thomas Martin, for One Duck Productions.

1 Drug dealer loses codes for €53.6m bitcoin accounts
2 ‘IRA has gone away’: McDonald responds to Garda Commissioner’s comments
3 A Dad with brain cancer: I was given 18 months to live, it put things into perspective
4 Ben Affleck: ‘It took me a long time to admit I am an alcoholic’
5 MV Alta: The unmanned voyage of the Ballycotton ‘ghost ship’
6 More than 25 people to sue over circulation of images taken at Dublin Garda station
7 Derry Girls’ blackboard goes on display as a museum piece
8 Varadkar says any Fine Gael deal would have to recognise strength of its vote
9 Jogger injured by galloping horse could face substantial legal bill
10 Politician’s son avoids jail for lighting firework in Copper Face Jacks
11 The close links between Sinn Féin and IRA untangled
12 Man stalked woman for weeks before climbing into flat armed with hammer
13 L’Ecrivain, Derry Clarke’s Michelin-starred Dublin restaurant, to close after 31 years
14 ‘Manchester United are lucky to have you’: Klopp responds to Donegal schoolboy’s letter
15 Who turned up to the Dublin casting call seeking ‘bone thin, amputees, crooked teeth’?
16 Stephen Collins: Reluctance of Fine Gael and Fianna Fáil to govern understandable
17 Steve Coogan says ‘my Irish passport will be arriving shortly’
18 ‘How can we torment a bunch of millennial snowflakes and get away with it?’
19 Knock gets visit from world’s largest passenger plane
20 Creche owner where girls allegedly assaulted had wanted ‘male role model’ for children
21 United greats in attendance as club hero Gregg laid to rest
22 Chance encounter with gardaí unmasked bitcoin millionaire drug dealer
23 Iain Henderson ruled out of Ireland’s Twickenham visit
24 Serving fireman charged with possessing cocaine at Tipperary fire station
25 A maverick taking on the Irish whiskey establishment
26 Why Sweden ditched its negative rate experiment
27 High Court quashes permission for Ronan dockland tower
28 Eddie Jones: back three will deal with Irish aerial threat
29 Lottery luck for syndicate set up to raise money for community centre
30 Paraic O’Donnell: MS is meticulously destroying me. I am being unmade
31 Six Nations: Ireland v England all you need to know guide
32 Use of CCTV footage in disciplinary process breached data rights
33 How much coffee should I drink? How much is too much?
34 So you still have an eircom.net email? Here is what you need to do
35 Will Avolon find itself on the block as China prepares to seize troubled parent HNA?
36 Six Nations 2020: England v Ireland - England player profiles
37 Student reaction to rent hikes ‘emotional’, says UCD president
38 The movie quiz: Who really controls James Bond?
39 Review: prepare to flip over Samsung’s new folding phone
40 Dr Pepper owner in talks to take over former Lidl distribution centre
Real news has value SUBSCRIBE