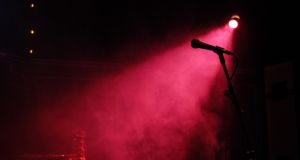 Five years ago this February, the recently reopened Smock Alley Theatre launched Scene+Heard, a festival of new work, to provide a platform for theatre artists to explore ideas and get feedback from audiences.

Even in its opening year, the festival offered a prolific programme, with 85 new performance pieces on stage. This year it has grown to embrace 109 companies, presenting work across the performing arts genres. There are traditional theatre productions, yes, but there is also stand-up comedy, circus arts, live music, spoken-word poetry sessions, and some shows even manage to bring these diverse influences together in one neat package.

The festival brief is, well, brief: all performances must be less than 60 minutes long. Artists respond by creating work within this tight framework or bringing just the germ of an idea to the stage.

Festivals create their own context, and in this way the programme for Scene+Heard 2020 offers a snapshot of contemporary concerns. James Moran’s Skinny Omalia (February 25th and 26th, 6.15pm) is one of several shows that puts technology and media at the forefront, examining the relationship between our consumption of media and our minds.

There is a docu-drama about drink (The Absolute State, February 29th, 4pm), and a children’s programme running across the festival’s central weekend, including the staging of a classic Celtic fairytale and the investigation of a universal myth (Eithne and Unicorns Are Real, February 22nd and 23rd).

Audiences are invited to get critically engaged with the work, the best of which has reappeared at Fringe festivals and regional venues across the country since the Smock Alley debut.

With this in mind, the theatre have invited industry professionals to meet artists at a three-day networking event.