Theatre vs Covid-19: How NI arts worked with BBC so show goes on 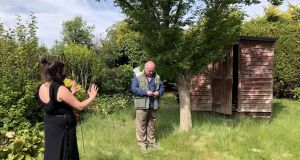 David Pearse in Kenny, a tale of an elderly recluse who views the actions of local good Samaritans with distrust.

Even in normal times, suffering for one’s art is something that the creative sector across this island knows all about. But these are far from normal times and when “normality” does return it will be of an entirely different variety from the one we have lived with for so long.

The freelance community in the North has been particularly badly hit, financially and creatively, by the effects of the crisis. In seeking to access various avenues of income support, they frequently fall between the ill-fitting bureaucracies of Northern Ireland and Britain and end up relying heavily on one another for guidance and advice.

Unsurprisingly, early funding initiatives came from within the sector itself. Tinderbox’s Solo Art was the first. Under the leadership of artistic director Patrick J O’Reilly, who recalls all too well the stressful unpredictability of the freelance existence, the scheme invited individual artists to make a short piece of work in any genre, for the modest sum of £100.

The project kicked off with a £3,000 injection from the Tinderbox coffers, a sum swiftly augmented by an additional £2,000 from private donations. At this point, BBC Arts stepped in with match funding, thereby allowing 100 artists to benefit.

BBC Arts has since extended its support for the ailing theatre industry with Culture in Quarantine, a project set up across the four regions of the UK to bring culture directly into homes during lockdown. Here it has linked up with the Lyric Theatre, BBC Northern Ireland and the Arts Council of Northern Ireland to commission six new, five-minute theatre pieces delivered by some of the region’s leading writers, directors and actors.

“Theatres are facing what must be the biggest challenge in their history. There are gargantuan difficulties in staging a production with social distancing. Imagine watching Romeo having to stay a sensible two metres from Juliet.

“[But] while the theatre curtains remain down, the talent is no less creative. One of the things that has, figuratively, brought us together while being apart is world-class theatre brought into our living rooms.”

Paul McClean, executive editor at BBC Northern Ireland, explains that the overarching goal of the project was to support artists. Last year, he and producer Feargal O’Kane worked closely with the Lyric’s executive producer, Jimmy Fay, on a documentary about the theatre, so the professional foundations were already good and strong.

“This whole project has been conducted in an extraordinary spirit of ‘let’s blitz it’,” he says. “From the start, we took the decision to throw out all corporate restraints and logistical obstacles – apart from health and safety measures – and go for broke. Shooting took place in the actors’ homes and gardens, in their natural environments. The results portray a whole variety of human experience – humour, sadness, loneliness, conflict, joy.

“At BBC Northern Ireland we have been looking at various ways of developing partnerships with live theatre for a long time so there was something serendipitous that these unprecedented times have given us the opportunity and impetus to do just that. There’ll be much more to come.”

The Lyric’s What’s On page currently has the word Cancelled plastered across its production images. At this moment, its long-awaited revival of the punk musical Good Vibrations, written by Glenn Patterson and Colin Carberry and directed by Des Kennedy, would have been rocking Ridgeway Street before heading to Donegal, Dublin and the opening of New York’s new Irish Arts Centre. Premiered to critical and public acclaim in September 2018, it charts the life of radical, rebel and music lover Terri Hooley on his mission to create an alternative Ulster.

These days, the Lyric’s handsome building beside the river Lagan is empty, its landscaped grounds overgrown, the ghost light in the darkened auditorium keeping the creative spirit alive. Fay is, however, buoyed up by the creative opportunities and challenges offered by the brave new world of theatre-making which is emerging.

“The theatre is dark, but we haven’t stopped producing throughout the lockdown,” he says.

“We put our New Speak programme of short plays online and pulled in around 8,000 viewings, far more than would have seen it in the theatre. We have made some of the shows in our archive available online and are now enjoying this lovely marriage between ourselves and the BBC.”

He has fashioned some intriguing creative reunions for the project, whose terrifyingly short month-long schedule required him to think on his feet and act quickly.

“We’d been talking with BBC Arts about doing something long before the pandemic hit. But this all happened very fast. There was no time for an open call so I had to make quick decisions in terms of commissioning writers, choosing directors and casting each piece.

“I made up a wishlist of people who I knew were capable of delivering the goods. When I showed it to the BBC they said I would never get all my first choices and I should have a reserve list. But everyone I asked came on board. They all have connections to the Lyric and it’s great to be able to give people like Emma Jordan and Des Kennedy – and, indeed, myself – the chance to direct for television for the first time.”

For all her years of experience in theatre, Prime Cut’s artistic director Jordan says she relished the opportunity to try her hand at a short film for television. Having directed the 2015 premiere of Stacey Gregg’s multiaward winning play Scorch, she was keen to renew her partnership with the writer as well as with actor Kerri Quinn, who played the title role in Jordan’s Lyric production of Educating Rita in 2016.

“I love film and TV so was delighted to rise to the challenge. The chance to work again with Stacey was an added bonus. Her piece The Wake Cakes is a reflection on how difficult it is for people who have lost loved ones during lockdown and how challenging it is for Irish people to say goodbye, minus the complex rituals of leave taking, which are such an inherent part of our culture.

“I’ve worked closely with Kerri and Stacey previously so we have a shorthand, which was useful, especially when working in a different art form. Theatre is undoubtedly my first love but this foray into film was great fun”.

Fay links up with his old sparring partner Owen McCafferty on A Random Act of Kindness. The focus is on a mature actress (Stella McCusker) who lives alone and passes the time by rehearsing plays from her repertoire. When a young drama student (Eoin McCafferty) arrives at her door to deliver her prescription, he brings the best medication of all, human interaction.

Conleth Hill directs Abigail McGibbon in David Ireland’s Love Lockdown. Long time friends and professional comrades, the trio combined on Ireland’s outrageous comedy Can’t Forget About You at the Lyric in 2014. This is a love story with a twist; it started at university and rears its head ominously again during lockdown. Expect laughter and fireworks.

Cathy Brady directed the first run-through of Abbie Spallen’s political satire Lally the Scut at the Lyric in 2012. The two Newry women come together for Best Wishes, the tale of Kenny, an elderly recluse, who views the actions of local good Samaritans with distrust. David Pearse plays Kenny.

Derry Girls creator Lisa McGee offers a tale of the supernatural through the eyes of a bereaved, emotionally fragile young man, whose attention is drawn to a girl in a window. Olivier Award-winning actor Anthony Boyle and director Des Kennedy revive their successful West End partnership on Harry Potter and the Cursed Child, while newcomer Julie Lamberton plays the girl.

Sarah Gordon writes and directs Just the Two of Us, as well as performing alongside Damian McCann in her piece about a fraught partnership in a shared lockdown workspace.

“The pieces are all very different – and very beautiful,” says Fay. “The timescale and the budget have been tight, for sure, but it’s been a brilliant, brilliant thing to do.”

Splendid Isolation: Lockdown Drama will be broadcast on BBC Two Northern Ireland on June 25th and will then be  on BBC Four on June 30th at 10.30pm and available on the BBC iPlayer.

‘This is such a terrible mess. But I feel the power of what we do more vividly than ever’
7