The trials of Brett Bailey: ‘I was seen as a racist South African. That typecast me’

‘Exhibit B’, at Galway arts festival, re-creates 19th-century ‘human zoos’. Are its critics right to say it replicates the wrongs its creator set out to damn? 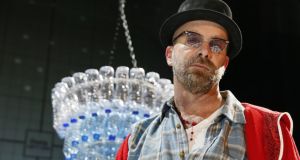 South African theatre director Brett Bailey: “I was interested in the representation of the other by the colonial order” 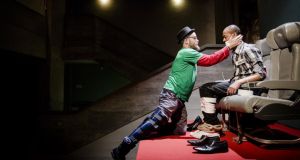 Exhibit B is a mock exhibition, inspired by the ugly 19th-century colonial spectacles of “human zoos”

For the past year or so it has seemed as though the South African theatre director Brett Bailey has been on trial. It gives the title of what is easily his most provocative work, Exhibit B, another resonance, as though it was held as evidence against him in the court of public opinion.

The theatrical installation, which arrives at Galway International Arts Festival next week, is certainly divisive: a “grand ceremony between revelation and prayer”, according to one approving critic, in Le Monde; or Bailey’s “theatrical fantasy”, according to another, with some concern, in 3:AM Magazine.

More precisely, it is a mock exhibition, inspired by the ugly 19th-century colonial spectacles of “human zoos”, in which black bodies, both living and deceased, were displayed for the titillation of white audiences. One infamous example is the case of Saartjie, or Sarah, Baartman, renamed the Hottentot Venus for the size of her posterior, who was displayed in 1810 like a freak-show performer.

Another is that of Ota Benga, an Mbuti Pygmy taken from the Congo and put in Bronx Zoo, in 1906, armed with a bow and arrow in the animal enclosure.

Bailey’s production, for his company Third World Bunfight, takes the form of a series of unsettling tableaux vivants that allude to the politics of such dehumanising spectacles. Its opponents worry that, rather than merely evoke those spectacles, it replicates them. It takes a chilling minute to realise, on first seeing a seminaked black man and woman in frozen, subjugated poses, that they are living people. As visitors enter the exhibition space one by one, the eyes of the immobile performers lock on to ours. We are watched in our watching.

The first of Bailey’s Exhibits (then called Exhibit A) took place without much opprobrium in 2010, in Vienna, followed by international appearances in Hanover, Helsinki, Brussels and Grahamstown, in South Africa. But in 2012, with an appearance in Berlin, debate around the production grew vigorous, leading to protests. By the time Exhibit B reached London, via Edinburgh, in 2014, the protests became disruptive.

Caving in to aggressive pressure, the Barbican notoriously arts centre cancelled the show. In Paris it saw more protests, an organised boycott and an attempt to secure a court ban. Bailey had clearly aimed to make a provocative work, but had he anticipated just how provocative Exhibit B would become?

“I thought it would provoke the right wing,” he says. “I had no idea it would provoke the left wing. In most of the 17 or 18 presentations we’ve made I don’t think we’ve ever been regarded as being of any importance at all. I’d never anticipated that we’d get a left-wing reaction like this.”

Bailey’s clipped, precise speech can come across as terse, and now he is in the awkward position of having to both defend and explain his work. As one objector, the South African spoken-word artist Philipp Khabo Koepsell, put it to him: “If you have a white South African director giving orders to black performers to tell their story voicelessly, you’re not breaking the legacy. You are enforcing and reproducing it.”

“I don’t think it was a personal attack, actually,” Bailey says now. “I think I was made into a type. I was seen as a racist white South African. That immediately typecast me. Now explaining the work has become part of the modus operandi. Although I’m not sure if it’s useful.”

Recently, in São Paolo, ahead of performances there next year, a black activist group refused to watch a video of the performance, quoting protesters from London and Paris. “They walk a narrow ideological line,” Bailey says.

Exhibit B was inspired by a book about human zoos and their use in legitimising colonial processes. “It wasn’t that I was trying to re-create a human zoo,” he says. “I was interested in the representation of the other by the colonial order. I don’t think there’s one of the installations which is a direct reiteration of a human zoo.”

It’s hard to disentangle the medium from the message, though: a traditional play about the phenomenon, with opposing voices and viewpoints, layers of critique and distance, would have been unlikely to have had the same effect. Nor is it the type of theatre that interests Bailey. “No, because I’m going out of my way to implicate the audience. And that stems from the fact that the objectification and mistreatment of the other is not confined to history but is something of the present as well.”

To this end the tableaux in Exhibit B, many inspired by the historical barbarities of “civilising the natives” through torture and mutilation, will lead abruptly to a contemporary figure, a Nigerian asylum seeker, say, now objectified with statistics and data, or, in one harrowing centrepiece, to a figure gagged and bound on an aeroplane seat in reference to a Sudanese man who was suffocated to death when deported from Germany in 1999.

These are the stories that society prefers not to expose, just as the treatment of refugees in Ireland, through the near apartheid of the direct-provision system, has long been an invitation to look the other way. In Exhibit B local black performers often join the cast to play asylum seekers, labelled in the production as found objects. (Plans to recruit asylum seekers in Galway were mooted, but funding and scheduling issues prevented that from happening.)

It’s surprising, given Bailey’s determination to implicate the audience in this display of power and exploitation, that he has not fully considered his own place within it. “That’s interesting,” he says. “I suppose I implicate myself as the artist. It’s something that I’ve toyed with quite a lot.”

He mentions one exhibit, entitled A Place in the Sun, inspired by the story of a Belgian colonial officer who kept a black woman shackled to his bed. (She eyes the audience through a mirror in the show.) “It’s the only one that I feel I could put myself in,” he says. “There’s a discarded officer’s uniform on the bed, and she sits there, waiting to be raped. The presence of the oppressor is implied. Is it possible, would it add anything, for me to step into that? When I list the components of the exhibit do I call myself the artist or the colonial officer, or what do I call myself? It’s not something I’ve resolved.”

Bailey’s life as a theatremaker, and arguably a polemicist, began shortly after the fall of apartheid, which he considers “the fall of a wall that had separated us” in South Africa “for years, for my entire lifetime. I, possibly quite pragmatically, thought, How do I make theatre which rises to the challenge of a new South Africa? How do I make a theatre which is going to speak to both black audiences and white audiences?”

To engage with black experience Bailey lived for a while in rural villages in South Africa, staying with a sangoma, or shamanistic healer, and attending ceremonies and rituals. “I think there was curiosity on both sides. It was a mutual learning time.”

Bailey began to structure his work around ideas of ritual “with this naive belief that being present at this theatre could bring some kind of communal healing and collective coming together, the way it did in those particular communities. But that stuff doesn’t work the same way in a completely different community. You might, as a white spectator, feel some thrill of the exotic, but you’re not part of a congregation. It was a naive experimentation.”

Besides, he says, he was always drawn to more disturbing matters, even as a kid. “I don’t think it was that conscious. It’s just a twist in who I am.” Since Exhibit B he has made Sanctuary, a piece about sexual abuse among the Catholic clergy, plus a version of Macbeth inspired by multinational exploitation of the Congo, and now he is working on a new piece called The Raft, about refugees fleeing atrocities in Africa and the Middle East “for shores where they’re greeted with rising xenophobia and a lot of hopes that will probably be dashed”.

“The stories I feel I need to tell now are about imbalances in power, basically,” he says. “Exhibit B is about the dynamics of people with power framing other people in a particular way so they can exploit them, take their territory and take their profit from them.”

It seems to be a point on which both Bailey’s admirers and his disapprovers might finally agree.

Exhibit B is at Black Box Theatre from Tuesday until Sunday, July 19th, as part of Galway International Arts Festival