The New York Times went to see Sing Street, the musical. Here’s what it thought 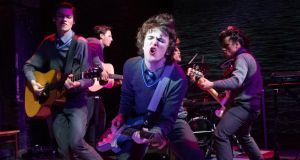 A boy presses Play, and the world goes away. That basic, everyday magic act, variations of which have been practiced by restless adolescents since the dawn of recorded sound, takes on fresh, senses-stirring life in the opening moments of Sing Street, which opened on Monday night at New York Theatre Workshop.

This promising but still unfulfilled adaptation of John Carney’s 2016 film about a fledgling pop band in dreary Dublin begins with an unhappy family watching a television show about the discontents of being young and Irish during the 1980s recession. A voice from the screen says that it’s time for his generation to flee Ireland, that “it feels like it’s not a country for young people”.

And then we hear the sound of escape itself, polychromatic chords stroked by synthesisers to shimmer at the edges, with matching voices singing of a bottomless appetite: “I just can’t get enough.” A 16-year-old, guitar-strumming student named Conor (Brenock O’Connor, in a smashing New York stage debut) is tuning out his squabbling kin by listening to Depeche Mode on his tape player.

On the one hand, there’s the grubby daily reality of an age of deprivation; on the other, there’s the boundless glamour of the music into which the characters regularly retreat

Because we’re in the world of musicals, where wishes are turned into song, an onstage band picks up the melody. After a brief, shambling start before the band hits its stride, we’re flooded with the ecstasy of how as well as what Conor hears. And a shopworn new-wave dance hit floods a dull world with the radiance of a neon rainbow.

Pretty much everything that follows in Sing Street, which features a book by Enda Walsh and songs by Gary Clark and Carney, will keep replicating this process of metamorphosis, with only limited variations. On the one hand, there’s the grubby daily reality of an age of deprivation; on the other, there’s the boundless glamour of the music – both bona-fide 1980s pop by the likes of Duran Duran and aspirational (and often delightful) imitations by Conor and company – into which its characters regularly retreat.

And every so often, the show slides intriguingly into a more nuanced and shadowy in-between zone. It’s a place where the defiant hope of pop rock is tugged at the edges by a melancholy awareness that for many of these people, escape will never be an option. It feels right that Bob Crowley’s minimalist set should be backed by a filmed wall of water, representing the Irish Sea that looms, tantalisingly and cruelly, as a conduit to another world.

Once had its own internally consistent reality, spun from an air of romantic regret. Sing Street, in contrast, often shows its schematic seams too clearly

Such tender melancholy was the essence of another, earlier musical to which Sing Street will inevitably be compared. That show was also adapted by Walsh from a film by Carney about musicians in Dublin. And eight years ago, it too made its debut at New York Theatre Workshop. Its name is Once, and it went on to a Broadway transfer and a Tony Award for best musical.

Many of the ingredients for a comparable success are in place in this production, which is directed by the gifted Rebecca Taichman, with sets and costumes by the mighty Crowley, who served the same function on Once. Its songs are likely to prove irresistible even to theatregoers who thought they were allergic to the sticky, romantic ear candy of the MTV age.

These numbers are performed by a team of highly individual, scrappy-looking young musician-actors who find their bliss in making sweet sounds together. And the show has its perfect, utterly natural leading man-boy in the 19-year-old O’Connor, who found early fame as the treacherous Olly in Game of Thrones. If Zara Devlin lacks the musical chops to sing the role of Raphina, the dysfunctional, “happy-sad” girl of Conor’s dreams, she has the presence to justify his obsession with her.

Yet these auspicious elements often seem to exist in a lumbering, sleepwalking state, as if waiting to be stimulated into the ideal selves that lurk within. Once had its own internally consistent reality, spun from an air of romantic regret.

Sing Street, in contrast, often shows its schematic seams too clearly. In plays like Disco Pigs and The Walworth Farce, Walsh has proved himself an original anatomist of the stories we tell ourselves to survive. He specialises in a linguistically rich indirection that can occasionally verge on opacity.

The script for Sing Street overstates the obvious, underlining what was already explicit in John Carney’s original screenplay

The script for Sing Street, however, overstates the obvious, underlining what was already explicit in Carney’s original screenplay. That’s especially true of the festering sourness of the grown-ups – including Conor’s uncomfortably married parents (Amy Warren and Billy Carter) and the sadistic priest who runs Conor’s school (Martin Moran).

Conor’s older, agoraphobic brother, Brendan (the appealing Gus Halper) is saddled with an “I coulda been a contender” speech that no one should have to deliver. There’s a surfeit of inspirational “follow your dream” lines. And there are cumbersome running jokes like one about the playwright John Millington Synge. (Conor’s school, the homophonic Synge Street, is named for him.)

More crucially, we aren’t allowed time to get to know the different lads who make up the band they call Sing Street, or to see them struggle into harmonious existence. They seem to materialise instantly with state-of-the-art instruments, and – after a perfunctory 20 seconds or so of cacophony – they’re playing like pros.

Taichman won a deserved Tony for directing Paula Vogel’s Indecent, in which she found a dreamy connective poetry for different layers of theatrical performance. But there’s a lack of a comparable fluidity here; the show often feels tonally stranded between wish-fulfilment fantasy and dream-crushing naturalism. And the blunt choreography by Sonya Tayeh (Moulin Rouge! The Musical) lacks the lyrical eccentricity that Steven Hoggett gave to Once, which seemed to bring mysterious interior lives into public view.

The band at Sing Street’s centre is already in precociously fine shape. It’s the show that surrounds it that still needs fine tuning

There is throughout some lovely interlacing of bubbly pop and more sombre, contemplative strains, as when Moran’s priest intones a prayerful counterpoint to the band’s aching love song Dream for You. (Martin Lowe did the orchestrations and arrangements.) Or when Conor’s older sister, Anne (Skyler Volpe, lovely), erupts into rage as her parents bicker, pounding a tattoo on the kitchen table that becomes the drum beat for the band’s exploration of the sexual divide, Girls.

And the show’s finale, Go Now, is a sentimental knockout. Beautifully led by Halper, on acoustic guitar, the song weaves contradictory feelings into a single exultant throb of music, and I was reminded of David Yazbek’s glorious, compassionate Answer Me, the choral climax of the Tony-winning musical The Band’s Visit.

During such moments, you hear the voice of the more fully satisfying musical that Sing Street could become. The band at its centre is already in precociously fine shape. It’s the show that surrounds it that still needs fine tuning. – New York Times

Passchendaele: A killing field of mud
9