The Irish couple who ran away with Cirque du Soleil

The contemporary circus is back Dublin with Corteo, and two locals in tow 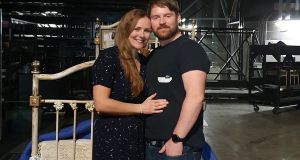 Found behind an immense heavy black curtain, the production-slash-backstage area of AccorHotels Arena in Paris is heaving with wild amounts of paraphernalia. Being Corteo, a circus-themed production from Cirque du Soleil, there’s cartoonishly large bed, a set of primary-coloured juggling clubs, angel wings, the front half of a horse costume and a chandelier with crystals the size of my fist and reinforced with metal rope – perfect for swinging off.

Way up high, running the breadth of this production area, are 22 large flags, representing the nationalities of the cast and crew that bring the story to life.

The Irish flag flies proudly at the very end, representing five of the 110-strong crew. There’s an Irish carpenter, a lighting person and a physiotherapist somewhere in the annals of the arena, and I’m in the company of Aoife Carry from Dublin, the show’s artistic director, and her husband Mark Carry from Tipperary, an automation technician (in other words, he controls the mechanics of the in-air acrobatics).  The couple met in Scotland when they were studying at the Academy of Music and Drama, now called the Royal Conservatory of Scotland. Upon returning to Ireland together, Mark worked for the likes of Smock Alley Theatre, The Gate and the Abbey and Aoife as a theatre director specialising in multi-disciplinary shows. But their interest shifted in 2012, when they saw their first Cirque production - Alegria - at the 3Arena.

“Once we saw it, we thought, ‘okay yeah, this is definitely something we want to move towards’. We were blown away,” says Mark. “We hadn’t seen anything like it because our background was in traditional theatre, like a lot of Shakespearean stuff . . .

“It was definitely next-level.”

So how did they run away and join the circus?When an opportunity came up for Mark to work on The House of Dancing Water in Macau – created by key Cirque director Franco Dragone – he took the plunge (pun intended) as it was a chance that couldn’t be afforded to him in Ireland. Once Aoife completed her masters in Theatre Practices in Glasgow, she joined him with their two young children. It took her a month to get hired as stage manager, then she was promoted to artistic director.

As we chat in a room with a neon paper sign declaring it the “Production office”, the pair continue the story of entwining their family life with their high-achieving work-travelling life as if it were no big deal. Clearly, both have the relaxed nature needed in the high-pressure world of live entertainment.

It was only a matter of time before they joined Cirque du Soleil, the pinnacle of contemporary circus. The company grew out of Montreal’s creative community in Canada in 1984, and now stands as the largest modern circus company in the world, with 4,000 employees. “They’re contemporary circus, so there are no animals,” explains Aoife. “It’s just theatrics and acrobatics that test the limits of the human body. It’s enough to make you feel like you’ve wasted your youth.”

Showing they’re not just adept at spinning plates onstage, Cirque du Soleil currently has 26 of the world’s most daring acrobatic shows on the go, from O - the aquatic performance at the Bellagio in Las Vegas - to the The Beatles-themed Love. Corteo is one of its longest-running, first conceived by creator Daniele Finzi Pasca as a big-top production in 2005 and innovatively revived for arenas.

Corteo, meaning “cortege”, tells the story of Mauro the Dreamer Clown as he lies on his deathbed. It begins as he dreams about his funeral, and scenes of his childhood, loves of his live and carnival friends follow; it’s a life flashing before our eyes. Sometimes the multilingual and mimed narrative is the focus, sometimes it’s paused in favour of some daring acrobatic scenes. But all fit the tagline that emblazoned on the hoodies worn by the backstage crew: “Get carried away with life”.

For the show, the arena is effectively divided into two, with the circular stage in the middle. It means half the audience can view the reaction of the other half as they watch the performances – especially entertaining when their 1.1m (3ft 7in) cast member sets sail around the arena in a perfectly weighted helium balloon, with only the audience’s gentle pushes to send her off again.

“You’ll see from the set outside that the production is really big – it’s one of the biggest shows that we have out on the road,” says Aoife. “It’s still the same story and the same aesthetic as the original concept, but now you get to see it in an arena. So that’s what you’ll see in Dublin.”

Pasca is here today, currently giving the 52 performers an instructive pep talk as they sit on the stage in rows, as if for a group photo. On a day to day basis, it’s up to Aoife to keep Pasca’s creative vision alive and entice the best performances.

“With Cirque du Soleil, we’re not bringing in actors, we’re bringing in acrobats who come from the sports world. So for some, this is their first time performing for an audience rather than judges. For example, there’s a part in which we create the childhood experience of jumping on a bed (the same trampoline-bed we saw backstage), so we need the acrobats to find their inner child.

The cast sign for a year at a time because “especially on the road, it takes a long time for someone to catch up”. However, if someone’s not fit enough to take to the stage –­ for reasons less dramatic than onstage injuries, more often it’s things like the flu or pulled muscles – the team also need to find a way to modify the act, or use the understudies for the main characters in the narrative. “Then it becomes a jigsaw puzzle,” explains Aoife.

When she says it’s one of Cirque’s biggest shows, she’s not exaggerating. Scattered everywhere are a total of 700 road cases. Two people are employed solely to manage loading and unloading them into 25 trucks like an elaborate Tetris game. In the make-up department, there are enough drawers full of numbered Mac products to make an Instagrammer weep (50 litres of make-up remover is needed annually to take it all off). And along the wall of the costume department are 260 costumes and a cluster of industrial-sized shoe buffers – though all the shoes in this show are given a raggedy finish in keeping with the bohemian circus aesthetic. If you thought organising a gals’/guys’ weekend away was hard work, spare sympathy for the person who has to arrange for all this plus 110 cast and crew to travel from city to city every week for months at a time.

Life on the road

What’s life on the road like for Aoife and Mark? For starters, their children are spared the constant upheaval; they’re minded by their grandparents while Mark and Aoife are away. The couple only rarely see each other at work . “We come to work together and go back together, and we co-ordinate our laundry times once a week, but that’s it,” says Mark.

The working week provides a little regularity to the unsettled nature of touring life. “We load in to a new city on the Tuesday, on Wednesdays we do validations [testing], then we premiere in the evening,” says Mark. “We do training and the show on Thursdays and Fridays, and usually double shows on Saturdays and Sundays. It takes around three or four hours to take the set down, then we travel to the next city on Sunday night. It’s a rest day on Monday, and then it starts all over again.”

In the canteen, there’s a small newsletter with suggestions for what to see and do in Paris, things like the Eiffel Tower, the Louvre and the catacombs. For most who’ve chosen this way of life, experiencing new places is a large part of Cirque’s attraction, despite long days at work. “You get really good with hitting up the main tourist attractions in a few hours,” says Aoife.

“Although there are some weeks, like in the middle of a leg, when you might be in a new city and you don’t even care,” says Mark. “You just want to stay in a room and sleep, and get ready for the rest of the week.

“Dublin will be a little different, however.” Indeed, it’s a happy coincidence that after a week-long run in their hometown, a three-week break follows, allowing them to unpack their suitcases for the first time in a long time. But no doubt when the road beckons again, they’ll be itching to answer.

Corteo runs at 3Arena, Dublin, from July 8th to 12th and 14th to 19th. Tickets are on sale now from ticketmaster.ie.