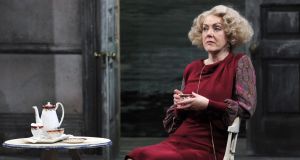 Black Box Theatre, Galway
★★★☆☆
Tom Murphy’s adaption of The Cherry Orchard has everything that a decent Irish play should have: drama over land ownership, a whisper of class politics, a matriarch, and a big house. Except it’s Russian. Irish audiences are no strangers to this 20th-century classic, but this Druid production is a marriage of sorts, and not always a happy one. (How very Chekhovian indeed.)

Murphy’s adaption takes a light-touch approach to the Hibernicisation of the text, and for the most part Chekhov’s characters survive intact. Derbhle Crotty’s Madame Ranevskaya is commanding. Crotty convincingly negotiates the ruinous intricacies of this character, and she is the fulcrum around which the entire play turns. The Druid ensemble is characteristically strong. Ian-Lloyd Anderson’s Yasha is perfectly pompous, and Marty Rea’s Petya is delightfully droll.

One of the places where this Hiberno-Russian cocktail spills over is in Garrett Lombard’s portrayal of Boris. This character lends itself well to a re-presentation of the feckless Irish lout, but something about the force of the way this is presented seems overwrought in the first half of the production, jarring slightly with the otherwise subtle approach.

Francis O’Connor’s set troubles the edges of realism, playing with suspension and empty space. The vast set signals to a world and a time being overthrown, pushing past the recognisable and into the new. It is a set that carries and frames the gaze through doorways, exits and entrances, creating a sense of fragility and suspense. James F Ingalls’s subtle and intuitive lighting design softly signals the relentless passage of time.

But there are several missed opportunities. O’Connor’s set gives the production permission to enter a slightly surreal landscape. David Bolger gives us a taste of what this looks like, and his movement sequences, be they company or ensemble, are fertile ground for meaning. In a play that is all about language, however, the language of the body feels underutilised.

This collaboration is more than a simple revival of a classic, but it holds back on delivering a punch. There’s a reason that this play should resonate with contemporary Irish audiences, and that message could have been more forcefully delivered. Something remains absent. In the words of Ranevskaya, “I keep expecting something to happen.”