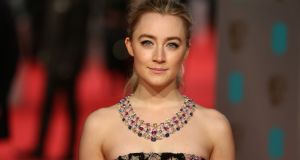 Saoirse Ronan’s co-stars, veteran stage actors Ciarán Hinds and Jim Norton, have lavished praise on the 22-year-old Oscar-nominated Irish actor for her stage debut in the Broadway revival of Arthur Miller’s The Crucible.

The two actors joined Ronan and fellow Irish film and theatre star Gabriel Byrne on a night off to attend a fundraiser for the Irish Arts Centre in New York at a Manhattan club on Central Park. Byrne is currently appearing in Eugene O’Neill’s A Long Day’s Journey Into Night, a role for which he has been nominated at this year’s Tony Awards, which take place on Sunday, June 12th.

Hinds told The Irish Times that Ronan was “brilliant” in the show. She plays the manipulative antagonist Abigail Williams in the American classic, which also co-stars fellow Oscar-nominated actor Sophie Okonedo and Ben Whishaw.

“She takes no prisoners. She’s scary to work with and for somebody who has never been on stage before,” said Hinds of Ronan’s performance. “To have her first job on a stage playing a leading role on Broadway – what do they say here, they say, ‘She rocks it.’ She has got huge confidence. She eats it up. What’s great to see is she does it every night.”

Jim Norton, a Tony Award winner, said that Ronan was handling having to perform eight shows a week very well. “When you consider, she has been dropped in the deep end. This is the first play ever in the theatre and it happens to be on Broadway and she has taken to it like a duck to water,” said the actor. He is perhaps best known here for his role as Bishop Brennan in the sitcom Father Ted.

“There are so many young actors in the show. She is the leader of the pack. She looks after them all and the noise from their dressing room during the show. They play all kinds of games, charades and things. She is terrific.”

Ronan appears on the cover of Time magazine this week as one of 10 young people from around the world selected as “Next Generation Leaders.”

Her presence along with her fellow Broadway stars helped the Irish Arts Centre raise almost $300,000 (€264,000) at the New York Athletic Club on Central Park. The centre has raised $47 million to fund the building of a new home in Manhattan’s famous Hell’s Kitchen neighbourhood and needs about $60 million to complete the project.

Barbara Jones, Ireland’s consul general in New York and a board member of the centre, urged the local Irish-American community at the fundraiser to continue to support the financing of new Irish Arts Centre, calling it “the crucible of the connection between Ireland and America”.

The centre was established in 1972 and has counted filmmakers Jim Sheridan and Terry George among its former directors in the 1980s. Gabriel Byrne and fellow Irish actor Liam Neeson are honorary co-chairmen of the centre.

Jim Norton also criticised the Irish Government for reshuffling the arts into a portfolio with regional development, rural affairs and the Gaeltacht.

“I don’t think they have any idea how important the arts are. Not only are they important for how Ireland is represented abroad,” he said. “I don’t think they appreciate the incredible amount of talent that our small country has produced. I think sometimes that is not on their radar.”

Pulitzer Prize-winning poet Paul Muldoon said that it was time for the Government to have a separate department to look after the arts, saying that it was “a major component of the economy in the country.”