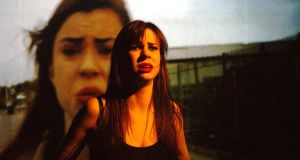 Irish language theatre is such a fragile, precious thing, so beleaguered and endangered, that it is hard not to get giddy upon hearing that the Dublin Theatre Festival for the first time in 17 years has programmed a production in Irish. A lot is riding on Réiltín’s slender shoulders.

Initially it looks like it can handle it: a rock opera with slick lighting, multiple video projections and starring the talented Clíona Ní Chiosáin, beloved among a generation for her role as Aifric in the eponymous TG4 youth drama series that helped make Irish relevant and attractive for the noughties generation.

The show is written and directed by Paul Mercier, who also directed Aifric, and is produced by Fibín, the innovative Connemara-based company who specialise in visually rich, physically dynamic theatre using dramatic devices from puppetry to complicated visual-mapping.

Despite this impressive ensemble, the show doesn’t quite know what it is. It aspires towards rock-opera, but with only one actor on stage, no dialogue, no live music or sets, it seems more like an attempt at replicating a gig, accompanied by video sequences in the style of low-budget TV drama projected behind the singer.

Ní Chiosáin’s strength as a TV actress is the subtly of her facial expressions rather than her physicality, which struggles here to convey an angry, disillusioned rock singer facing her demons with any conviction.

Réiltín is most reminiscent of a school production staged by a particularly devoted TY teacher, and as such could well appeal to that constituency. Among the many newly composed songs Ní Chiosáin belts through, there are at least two good ones – although the sound system is so loud and distorted that these are largely indecipherable.