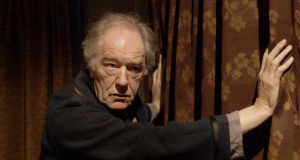 The outgoing director of the Gate Theatre, Michael Colgan, has released details of the last elements of his programme. The festivalfeatures work by three iconic playwrightswith whom the theatre forged an indelible connection under his stewardship.

During those 33 years, some of the Gate’s major achievements have been entwined with Samuel Beckett, Brian Friel and Harold Pinter, all of whom were previously celebrated with individual festivals. Beckett has been so honoured more than once, in 1991 and 2006, each time generating productions that won international acclaim for the theatre, and again more recently among 2010’s combination festival, Beckett Pinter Mamet, which is the model for Colgan’s valedictory festival, operating under the acronym, BFP.

The plays selected are modest in scale individually, but have each made significant impacts, either for their writers or for previous Gate productions. It is not quite a greatest hits package, if such an undertaking was possible, but follows Colgan’s inclinations towards artistically credible and conspicuously male-heavy programming, while the calibre of participating artists invokes some of the theatre’s major successes over the last three decades. Among the celebrated names returning to the Gate for the festival are Michael Gambon, Barry McGovern, Derbhle Crotty and Owen Roe, with Ralph Fiennes, Lia Williams, Penelope Wilton, Charles Dance and Liam Cunningham set to appear at prose and poetry reading events.

A new staging of Pinter’s early one-act play, The Dumb Waiter, will be directed by Joe Dowling, featuring Lorcan Cranitch and Garrett Lombard as hitmen awaiting instruction in an absurdist setting. It is joined by One for the Road, Pinter’s short evocation of torturous confrontations under a brutal regime, directed by Dough Hughes and featuring Owen Roe as its menacing interrogator.

Both of the Beckett works are adaptations, with Colgan’s own directing of the novella First Love reprised following its recent outing at the Dublin Theatre Festival with Barry McGovern, together with Michael Gambon’s return in Atom Egoyan’s staging of Eh, Joe, a work conceived originally for television and here presented as a fascinating mixed-media production, narrated by Penelope Wilton.

Both of the Friel plays began as original Gate commissions, each staking a kinship with Chekhov: 2001’s The Yalta Game, based on the Russian writer’s short story The Lady with the Lap Dog, is here directed by David Grindley, while Mark O’Rowe directs Derbhle Crotty and Denis Conway in Friel’s Afterplay, an imagined meeting between Sonya, Uncle Vanya’s niece, and Andre, brother to the Three Sisters.

The festival is rounded out with two readings of poetry and prose by the writers, featuring celebrated actors with long relationships with the Gate, including Liam Cunningham, Charles Dance, Lia Williams, Fiona Bell, Ralph Fiennes, Barry McGovern, Penelope Wilton and Ingrid Craigie.

The festival runs from March 7th to 26th.

Better Call Saul: The best drama on television is back
9