Nancy Harris’s characters, scarred by experience, are torn between taking responsibility or seeking a hero 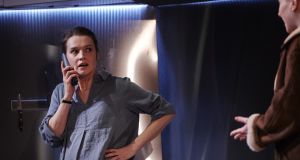 While her husband is away in Haiti, contributing his skills as a plastic surgeon to the disaster relief effort, Hazel is surprised to discover that his charity begins at home. Standing before her in her London kitchen, unswervingly agreeable and quite insistent, is Annie, an au pair from Sligo, hired without Hazel’s knowledge.

“He said you needed some support,” explains Annie, whom the remarkable Bláithín Mac Gabhann makes as attentive, reassuring and faintly automatic as Siri and Alexa combined. Her experience is something more earthy, though, raised on a farm and accustomed to brute reality. “His name was Barry,” she says, quite cheerfully, about the first piglet she remembers seeing slaughtered.

Like much in Nancy Harris’s stealthily gripping drama, first staged in London’s Bush Theatre in 2012, it’s an odd, amusing, unsettling embellishment. But, in a kitchen made minimal with maximum effort in Alyson Cummins’sdisarming design - all steel and slab, sharpened knives and rugged brick - Annie seems no more out of place than the teeming bottles and boxes of olive oil that cluster through the space like an Amazon order gone awry. Hazel, an accomplished lawyer now reluctantly turned stay-at-home mum, imports the stuff for sale. Ironically, though, it only seems to generate friction.

That, however, comes down largely to a collision of character and circumstance, one of Harris’s strong suits as a dramatist. As Hazel, Catherine Walker presents a figure of polite exasperation, a cauldron of unrest with few constructive outlets and some telling contradictions: the type of mother who pleads with her son for normalcy, but secretly buys him a pet tarantula. (In one sly, unnerving moment, given extra chill by Phillip Stewart’s score, Aedín Cogrove’s lights cast stark, spidery shadows across the space, as though everyone is caught in its web).

Though it takes Walker a while to find something surprising in the role, when her inner lawyer resurfaces, her Hazel is a confined woman struggling between responsibility and self-assertion. When Annie reprimands an eruptive Daniel (James Lonergan on the night of my viewing, who alternates with Conor Ó Hanlon) for endangering “the baby”, Hazel insists, “You hurt me.” Highly strung, where Aidan McArdle’s eventually reappearing Richard is slickly oblivious, Hazel is understood here with as much unforgiving clarity as compassion. In Harris’s play, everyone counts.

That makes the subtle tragedy of director Anabelle Comyn’s fluent production all the sharper. “Annie, what do you think?” Richard asks, at the conclusion of one tense exchange with Hazel, as though he has found an umpire or an ally. Mac Gabhann, maybe the most compelling recent arrival to the Irish stage, steadily shows that Annie’s judgement is hardly impartial, as her riveting performance reveals hidden depths. Everyone here is scarred by experience - figuratively and sometimes literally - torn between taking responsibility or seeking a hero.

Often we see characters on the edge of harmful action, and though Harris avoids overt explosions, the thought alone can send shivers.

The more conspicuous tragedy, though, is that Daniel, already the scapegoat for family dysfunction, gets caught up within the craven dissembling: projected upon, used and manipulated in this confusing world of supposedly authoritative adults. There is some genuinely grown-up hope in Harris’s play, though - and in this assured production - that selflessness and selfishness can be reconciled; that we can own our scars, lend support, learn to help ourselves.