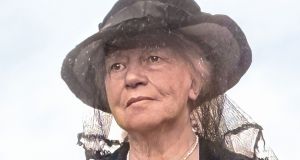 Druid theatre company is returning to live performance next month with a tour centred on the works of Lady Gregory.

DruidGregory, featuring the Tony award-winner Marie Mullen as the dramatist, will begin on September 15th with a week of performances in the fields, woods and gardens of Augusta Gregory’s home at Coole Park, in Co Galway. Six of her one-act plays will be performed by a company of 12 actors and musicians, directed by Druid’s artistic head, Garry Hynes.

This will be followed by a 14-venue, four-week tour of Co Galway, at locations including Portumna, Glenamaddy, Ballinasloe and Clifden. The tour, which was commissioned by Galway 2020 European Capital of Culture, will also take in one-off outdoor performances at historic sites such as Kylemore Abbey, Pearse’s Cottage and Ballyglunin railway station.

They will perform Gregory’s plays The Rising of the Moon, Hyacinth Halvey, The Gaol Gate, The Workhouse Ward, and McDonough’s Wife; Cathleen ní Houlihan, which she wrote with her great friend the poet WB Yeats, is also on the bill, as is poetry by each of them, plus music and dance.

“Inspired by the landscape and the history of our beloved home in Galway, we have dreamed up something special for these times: DruidGregory,” Hynes says. “Lady Gregory is one of those people of whom many have heard but few know much about. More than 100 years ago she was part of the development of an Irish literary and theatre culture that would express the richness of the Irish nation. This led to the founding of the Abbey Theatre and the subsequent creation of an indigenous Irish theatre. On its foundation in 1975, Druid became part of that story.”

DruidGregory will also include one-off outdoor performances of On the Outside, the first play by the Galway writer Tom Murphy, which he wrote with Noel O’Donoghue.

Tickets go on sale on Friday via druid.ie