I was a teenage Riverdancer – and I may never get out

Riverdance has been many things to me: a dream, a job, a source of joy and of disillusionment 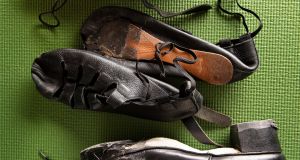 When the question “what do you do?” comes up with people I’ve just met, I know it won’t be long before I need to make a delicate calculation. I usually explain that I’m a dance critic and that I used to dance professionally.

Divulging the information that “I was in Riverdance” has never been simple, not during the 4½ years I spent touring, on and off, with the Irish dance extravaganza, and not in the decade since I last set foot onstage with the show.

Most recently it happened with a colleague, an artist who knows me mainly as a critic, when she asked how my work was going, and I told her I was writing this story. “Did you know I was in Riverdance?” I said. “What? No!” she replied. “That’s so funny!”

I understand that many people feel this way – especially those from outside the Irish dance world – and I don’t entirely blame them, even as I want to leap to the show’s defence. Therein lies the problem. It doesn’t really matter how my revelation is received, or precisely what “funny” might mean; I’ve entered the maze of my own uncertainty about Riverdance.

As the production’s 25th-anniversary tour opens in Radio City Music Hall in New York, I realise I’ve been in a nearly lifelong relationship with this strange cultural phenomenon, one that I struggle to elucidate even for myself.

The mere sight of a Riverdance billboard – and they’re everywhere in New York right now – fills me with an uneasy mix of affection and anxiety, embarrassment and pride.

As someone who began Irish dancing in the early 1990s, just before Riverdance emerged and turned the once-provincial dance form into a global craze, I’ve become accustomed to public perceptions of the show as both an impressive spectacle, and something to joke about.

There was a time before I knew that Riverdance could be considered anything but flawless when I myself viewed it as the pinnacle of artistry. I first saw the show when I was nine, during its Radio City debut in 1996. I had been introduced to Irish dance on a family trip to Co Kerry, through a friend who lived down the road from where we were staying.

Closer to home in Massachusetts, I started taking formal lessons and, like most young people who want to excel in Irish dance, training for competitions. One day my mother found herself on hold with Aer Lingus, listening over and over to an ad for an Irish dance-and-music sensation that was coming to New York. She decided we had to go.

The show captured my heart. Compared to the steps I was learning in class, the choreography was modern, alluring, cool.

By the time I was invited to audition, during the spring of my freshman year of college, my once-unfettered enthusiasm for the show, and for Irish dance in general, had waned. But I put aside my aesthetic critiques and went through with the audition. When I got it, I left school for a semester to join the 10th-anniversary North American tour.

It didn’t feel like work at first. I looked forward to the evening rituals of doing my make-up, warming up onstage and waiting in the wings at the top of the show. The dancing itself could be exhilarating. In the beginning, I thrived on the extreme precision it demanded and the challenge of delivering this before so many expectant eyes. I had never performed for such large crowds or received such ecstatic applause.

Yet after powering through eight shows a week for a couple of months, the repetition began to wear on me, more psychologically than physically. Pounding out the same steps night after night, as part of the smiling chorus line, I found myself feeling deflated, reluctant to do it again – and again.

When I learned that my contract wouldn’t be renewed, after about three months, I was more relieved than disappointed. In the next few years, I returned to the company periodically when a substitute was needed. I enjoyed seeing old friends and new places, but I never longed to do a full-fledged tour again.

If dancing and watching dance have taught me anything, it’s to be comfortable with ambiguity, and not to always seek a tidy resolution. As I anticipate being in the audience at Radio City soon, and the tangled feelings that are bound to come up, maybe I need to apply those lessons here.

Riverdance has been many things to me: a dream, an adventure, a job; a source of joy and disillusionment; an experience I sometimes miss. I was in it, and I may never get out.