In all great plays, a calamity can be adapted to any circumstance – pandemic, for example 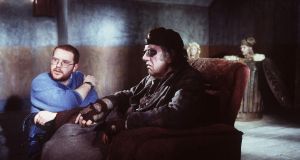 “Outside of here it’s death.” No play better captures the experience and the meaning of lockdown than Samuel Beckett’s Endgame. In it, four people – the blind and immobile Hamm, his elderly parents Nagg and Nell, who are confined to dustbins, and his relatively able-bodied servant Clov – are stuck together in a dwelling, frequently referred to as a refuge, which is very evidently the last place where humanity can survive.

Some kind of catastrophe has apparently rendered Earth uninhabitable. In 1957, when the play was first staged, the catastrophe was of course interpreted as nuclear destruction. But like all great plays, the nature of the catastrophe can be adapted to any circumstances – a pandemic is just as possible. That the disaster may be ecological is also quite evident: the likelihood that the world outside is dead and cannot support life is frequently indicated. (HAMM: Nature has forgotten us. CLOV: There’s no more nature.)

So the four characters are isolated (self-isolated?) in this very restricted space, with only Clov’s small kitchen, off-stage, to which he sometimes retreats, as an alternative area. The play simply “takes its course”, with no indication that the day has moved on in any way, or that there is any day and night alternation, unlike in Beckett’s previous play, Waiting for Godot.

For its full effect, it needs to be played very slowly, with a sense of even theatre time only barely passing

A sense of timelessness, very like what the more senior citizens especially have experiencing during lockdown, is a crucial part of the work. What happens onstage happens in a state which bears no relation to normal conceptions of time’s progression. For its full effect, it needs to be played very slowly, with a sense of even theatre time only barely passing – hard for a director and actors to get right, but crucial if the play is to work.

How do the characters fill up this strange interregnum, this permanent stasis? By acting, since actors are what they are and this is a theatre. Endgame is what would now be called a “spin-off” from Godot; it represents a development of two marginal figures in that play, Pozzo and Lucky, into the protagonists. (The two marginal figures in this play, Nagg and Nell, will give rise to further developments in later Beckett work.)

Hamm is a more reduced Pozzo: by the second act of Godot, Pozzo is already blind and barely able to walk; here in Endgame he is confined irrevocably to a chair. Lucky, conversely, has come on somewhat since Godot; as Clov, he is now more independent and can talk and act independently. The correspondences are not exact, but close enough to warrant the inference of a basic continuity.

In Godot, Pozzo, on his first appearance, is a ham, a grandiose, strutting figure very inclined to magnify himself and his non-achievements. He expects Didi and Gogo to know his name and is most put out when they don’t. So it is appropriate that he should be renamed Hamm (with its connotation of ham actor) in the later work. Hamm still keeps up the great tradition: “Can there be misery loftier than mine?” he asks in his very opening words: as a good old theatrical prima donna, he expects to outshine all the others, even if only in terms of the degree of his misery.

So Hamm and Clov go through the motions, exchanging brilliant dialogue (HAMM: Do you believe in the life to come? CLOV: Mine was always that.), all essentially with a view to getting through, to pass away the non-time while whatever is taking its course independently of them takes its course. (A situation with which we have become all too familiar in recent times.)

Matters are enlivened from time to time by the interventions of Nagg and Nell from their respective dustbins (in the US, it was the placing of this pair in “ashcans” that gave the play its greatest notoriety). Their exchanges with Hamm, especially Nagg’s, are far from tender. (When Hamm asks bitterly: Why did you engender me? Nagg replies, very reasonably, “I didn’t know . . . that it’d be you.”)

And it is characteristic of Beckett to refuse to sentimentalise the situation, or to allow too much pathos to develop from it. Particularly harrowing is the speech by Nagg in which he recalls of moving the child Hamm so he would be out of earshot when he was frightened and crying at night “and I was your only hope”. This is part of what Beckett called the power of the text to “claw”.

He had been disturbed by some of the reactions to Godot, especially those that read a semi-religious meaning into it, and was determined that this time there would be no easy softening for audiences of a dire, trapped situation. Equally, he had been upset by the way Godot’s comic aspect, which is of course there, had been overstated (“the laugh hit of two continents”, as the advertising for the American premiere stated – no wonder it was a disaster). And this was even before Peter O’Toole got his hands on it.

Above all, though, there is the unfinished story that Hamm keeps telling

Nell’s line that “Nothing is funnier than unhappiness, I grant you that” derives directly from Beckett’s experience of the reactions to Godot; he had used it in a letter in that connection. Again, he was determined that such a misapprehension could not happen on this occasion. The play’s humour is certainly there (zs Clov scans the audience through a telescope, he says “I see a multitude . . . in transports . . . of joy. That’s what I call a magnifier”), but is kept firmly in check.

Although the sense of claustrophobia can be overwhelming in this enclosed space, there is also a powerful awareness of the outside world: at the start, Clov scans the horizon through the two windows set high up in the rear wall, one giving on the land, the other on the sea. The condition of each, as he reports to Hamm, is “zero”. References are also made to people who once inhabited this outside world: Mother Pegg, who dies “of darkness” after Hamm refuses her oil for her lamp, an “old doctor” who Clov says wasn’t old, but who is dead in any case.

Above all, though, there is the unfinished story that Hamm keeps telling and failing to complete, of a man who “comes crawling” to him one day. “He raised his face, black with mingled dust and tears”. Initially, the man seeks “bread for his brat”, languishing at home some distance away.

Hamm, of course, contemptuously refuses – things have gone much too far for the succour of one little boy to be either viable or desirable – but, surprisingly, he offers to take the man into his service (“He had touched a chord”). The man gratefully accepts, but, “down on his knees, his hands flat on his ground, glaring at me out of his mad eyes” has one further request: can his boy come with him?

“It was the moment I had been waiting for,” says Hamm. It is the moment we have been waiting for also, but just as in Godot, we continue to wait, since what happened is never revealed. Hamm continues to upbraid his petitioner with the absurdity of his plea, but does not say that he in fact refuses.

The story’s power, the man’s desperate request ... make this work a seminal moment in Irish theatre

There is reason to believe, however, from other exchanges in the play, that Hamm did take the boy in, and that the boy is actually Clov. Even if not, the story’s power, the man’s desperate request, and Hamm’s stuttering, hesitant, repetitive way of telling it, make this work a seminal moment in Irish theatre. The play’s resonances are still being felt – rather, are being felt more than ever – in the work of such playwrights as Enda Walsh and Mark O’Rowe.

It would be unwise, as remarked before, to over-sentimentalise Hamm’s gesture, if it is one. Clov might well not thank him for it. But there is “something there”, something that might speak to our closeted condition at this pass. There may also be something to be inferred, without drawing any morals of course, about the cost of excessive confinement. As another noted (and Nobel) Irish writer put it: “Too long a sacrifice can make a stone of the heart.”

Virginia Giuffre’s heartbreaking, vivid account of being told to have sex with Prince Andrew
8

‘This is such a terrible mess. But I feel the power of what we do more vividly than ever’
9

‘I don’t like Jack Reacher that much’: Lee Child and fellow crime writers on their creations
10