Eileen Walsh: How I reconcile motherhood with playing Medea 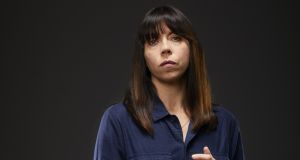 Eileen Walsh was a young mother when she first played the role of Medea, 10 years ago, in a production directed by Selina Cartmell. Sporting a peroxide elfin hairstyle and a little black dress, she stalked Paul O’Mahony’s domestic doll’s-house set like a savage imprisoned by civilised style. With the betrayal of her tribe she had made her own bed, and fate decreed that she would lie in it.

With two small daughters waiting in the wings, Walsh was especially attuned to the violence that defines the Greek myth and which has been the subject of much controversy in contemporary times. How are we to understand the actions of a woman who kills her own children in a culture where it is assumed that self should be sacrificed to motherhood?

“It was bloody terrifying,” Walsh recalls, dominating one side of a long boardroom table at the Gate Theatre offices, her long, dark hair framing a fresh and pretty face. “But I could understand why Medea did it. It wasn’t about [the children], really. What she was trying to say was ‘it’s about me and you’.  Her passion – that sexual, driven need – overrides any maternal love. In the story of Medea and Jason, as far as she’s concerned, the children don’t really matter.”

That 2010 production – a poetic distillation by Robin Robertson – could not be further than the version that Walsh is about to star in at the Gate Theatre, in a production directed by Oonagh Murphy. Despite retaining the title of Euripides’s original, writers Kate Mulvaney and Anne-Louise Sarks shift the story’s focus from the eponymous barbarian to Medea’s children. The children’s bedroom, where the two boys reenact their parents’ fights and take shelter from the off-stage violence, becomes a microcosm for the heated house, where Medea and Jason are embroiled in their final, definitive battle.

“Oh, it’s sooo modern to take their feelings into consideration,” Walsh says with a wry wit that characterises much of our exchange, despite the dark subject matter. “I mean, gawhd, must children really be allowed to have an opinion on everything! But seriously, it’s very different seeing what the heat of the house is like from their perspective, seeing the passion they are exposed to. How the sins of parents play out on children. How the children play it out to try and understand it.

“Last night in rehearsals one of the young fellas [there are two pairs of child actors engaged for the run] said, ‘it must be very hard when mum comes into the room, because they have just heard her screaming so hard they said her throat must hurt.’ And yeah, that must be really scary. So seeing it from their point of view brings a really fresh perspective to the story. It also means that when it gets to the inevitable, it is more heartbreaking, because you have just spent an hour in their company.”

For Walsh, however, Medea’s self-interested passion remains unchanged, although, a decade older now, she is interested in exploring a greater multiplicity of motivation. “Everyone is the hero of their own story, and Medea truly believes that killing her children is the right thing to do,” she says,  “whether that’s because she is doing it out of anger, or out of love, or because she is saving them for eternity. And she is doing it because of all of those things. She has this warped way of thinking: ‘nobody will mind you like I will mind you.’

“And she has evidence. Jason has already shown himself: he can’t be relied upon, responsible, to protect them forever. Killing them is a huge revenge on him, but she also knows that she will have them forever in the afterlife, because, ohhhbviously, she’s a demigod. But she could also be the woman down the road.”

For, despite the grotesque nature of her actions and her supernatural status, Walsh insists, Medea’s breakdown is less alien than familiar. Recall, for example, Walsh’s turn as a sexually frustrated mum-on-the-run in Sharon Horgan’s Catastrophe. “I think people who aren’t parents can sometimes find it very difficult to understand the level of frustration and anger you can feel – even at your kids – when everything is coming in on top of you, when there are financial problems, work problems, marriage problems, and the house is a mess, and someone starts to eat a brick off the floor when you have told them 10 times not to. It can get vicious, but you still end up holding each other at the end.”

Walsh’s children – with her husband, sculptor Stuart McCaffer – are now 14 and 11, so it is easier to distance herself from the emotional devastation of Medea’s final act. However, Walsh still remembers clearly the challenge of trying to keep working once her children arrived. “I remember I was pregnant when I was doing Terminus in Edinburgh [in 2008] and I was so exhausted by it. I had to spend the whole show on my feet and I thought I would never get through it. Then there was the pressure to go back to work early, and you are trying to express milk and your boobs are filling up in the middle of a show, and you have to bring your body on stage but it is not your own.”

Although they had no family in London to help ease the pressure, Walsh says that she was lucky to get a lot of support from her collaborators. “Vicki Featherstone at the Royal Court – she couldn’t have been more accepting of motherhood and encouraging women back to work. Her attitude is, ‘Bring the kids in if you have to, just get the work done.’ So there were days where the kids would be asleep in the buggy or locked in the [theatre’s] kitchen on an iPad.”

There was also Mary from Donegal, “who brought up most of the Irish theatre people’s kids”, and whom Walsh characterises vividly in a series of hilarious anecdotes. “All the Irish actors would say, ‘oh you have to move up to Queen’s Park because at least you will have Mary.’ What would any of us have done without Mary?”

Even now, though, it is hard to balance the demands of parenthood and professional acting life. Walsh feels the distance from her children keenly when she is working in Dublin, but everyone is used to the rhythm of it.

“We set it up from the very beginning that Stuart would be the one who is there on a more consistent basis. I need to travel for work. He doesn’t. But it is hard, and I go back for long weekends and they will come over during the school holidays.”

What this version does so well is it shows you how children, in their innocence, create a shelter for themselves

She is not sure if her children will come to see the play. “I mean, I am not even in it for most of it. I remember when they sent the script to me, I was flicking through it madly, wondering, ‘ehhh, where are all my all lines?’ But when they come! Oh, I would have taken the part for that first short monologue alone.”

As to how they might feel about the darkness of the ending – or how the young actors she will share the stage with do – Walsh is not sure.

“God, yes, it’s dark, but what this version does so well is it shows you how children – in their innocence – create a shelter for themselves sometimes through their limited understanding. And when you think of the original play – Euripides, I think, was the first one to have the children stabbed on stage – the violence . . .”

What we see in Mulvaney and Sarks’ version is something very different, Walsh concludes.

“You could almost – almost – say there is tenderness in it.”