The playground is a battleground in Animalia, while Looking Deadly pits a pair of small-town rival undertakers against each other 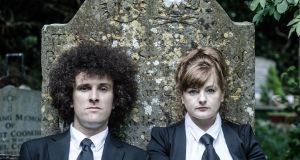 Animalia ★★★★
Smock Alley Theatre, Boys School
The playground is a battleground in Animalia, which strips the innocence from childhood friendships to reveal their darker side.Writer Ian Toner avoids sentimentality in this brutal representation of a sexually-charged pre-adolescent world, where girls are just one step ahead of gorillas in their primal urge to mate or kill. Director Sarah Finlay makes good use of Katie Foley’s mobile set, moving park benches around to change time and location, and this ensures the monologues never feel static. It is performers Ashleigh Dorell and Louise O’Meara, however, who really bring Toner’s world to life, with expressive performances that veer on caricature but never neglect the human touch. As spider-loving Sarah trudges home through the rain, and Danielle sits alone in her roofless tree house, the audience is left in no doubt that an even more chilling future awaits them.
- Until Sept 18
Sara Keating

Eggsistentialism ★★★
Smock Alley Theatre Black Box
A woman wakes up with the mother of all hangovers. It is her 35th birthday, and she has a decision to make. Should she have a child before it’s too late? Maybe it’s already too late? What would she gain by having children - and what would she lose? Joanne Ryan invests her journey into fertility and feminism with sparkle, self-deprecating humour and a generous helping of audio-visual technology. Of the latter, the voice of her offstage “mammy” making sharp, wry interjections is hilarious. The video projections are more problematic; a trawl through this country’s dismal history on women’s issues is sobering, for sure, but slows Ryan down just when she should be building towards, ahem, a climax. However, her impeccable comic timing and captivating stage presence carry the day.
- Until Sep 17
Arminta Wallace

The Wickedness of Oz ★★★★
Bewley’s Cafe Theatre @ Powerscourt
Kate Gilmore bounds through the theatre with all the swagger of the funniest girl from school, strutting between tables like on the top deck of the 17A. She’s at her finest when delivering catty one-liners or slinking into the show’s many characters - her odious manager in a travel agent, a screeching love rival from Cabra, a squatting, monosyllabic bus driver - and she has the room cackling throughout. The musical interludes and references peppered between scenes are occasionally superfluous to an already tight narrative. Where they do work, they play their part in escalating the tone to a brittle crescendo of frustration at being trapped in a stagnant town, watching your potential pour down the drain. We’ve heard so much about those who left the country for a better place, the lost “generation emigration” disappeared to Australia and beyond, but what about those who had no choice but to stay?
- Until Sept 23
Aifric Ní Chríodáin

Looking Deadly ★★★
Bewley’s Cafe Theatre @ Powerscourt
Looking Deadly pits a pair of small-town rival undertakers against each other in a comedy with critical consequences. Writer/performers Niamh McCann and Keith Singleton set up several pairs of characters for scenes of comic sparring: the old-man duo Eddy and Paddy, bickering over poitin and newly-single widows; the sandwich-makers buttering up bread and mourners; two teenaged legacy-sharks; and, of course, the warring funeral directors: Jane Lynch and her assistant Rob, and the conniving father-son team behind Cost Less Coffins. Under director Amy Conroy’s guidance, McCann and Singleton mark the transition between characters well. The script is very funny, making great use puns and a memorable Twitter handle from bored bereavers: #burymealready. The script, however, could do with a really good pruning, and by the time the predictable storyline draws to a close, the church bell couldn’t toll fast enough for this reviewer.
- Until Sept 23
Sara Keating

- The Tiger Fringe festival in Dublin runs until September 25th. fringefest.com. Reviews continue daily through the festival at irishtimes.com