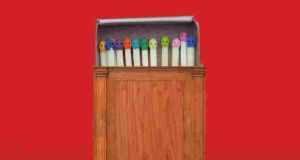 The Justice Syndicate: human psychology is the only thing beyond reasonable doubt. Photograph: Guy Sanders

Four Courts
★★★★☆
What would happen if jury duty was a game? This emotive mock trial sequesters the audience in the Four Courts to reach a verdict on a sexual assault case with troublingly elusive evidence.

A world-class surgeon, specialising in child cancer, is accused of the attempted rape of a patient’s mother. Is she making false accusations, following her spurred advances (as the defence argues)? Or does his sordid internet history, full of violent fantasy, reveal a predator hiding behind privilege?

As details and testimony are rationed out through iPads, and group discussions take place against a countdown, the only thing beyond reasonable doubt in UK company Fanshen’s absorbing piece of interactive theatre are the quirks of human psychology. Those stumbles of cognitive dissonance and confirmation bias are explained to us, however, in a rather pedagogic debrief, as alive to Brexit schisms as #MeToo sensitivities. Our gameplay, it is noted, has been captured for further study. Are we the ones on trial?