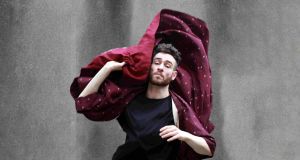 Black Box, Smock Alley Theatre
★★★★★
“Do you want me to sing at your funeral?” Seán Kennedy asks his mother during an emotionally turbulent visit to her home in Australia. The question is heartbreakingly urgent. Kathleen, whose convoluted recipes and angel-card readings her son both teases and indulges, does not have long left. Contending with her terminal illness and a second dysfunctional marriage, their relationship is tender but complicated.

That makes this extraordinary performance, composed with love and freighted with grief, all the more moving. In dialogue it traces human limitations: our fruitless interventions, massing frustrations, harmful patterns. But with its depiction of ritual, Kennedy’s arresting motion, the shifting space of its set, and, above all, its choral compositions and operatic song, Nine Weeks is transcendent, giving voice to the inexpressible. The journey, finally, is not despairing. “Am I killing her?” sings Kennedy, facing extreme odds as they board planes to Ireland. The strength it takes to arrive, they know, is not as important as the strength it takes to go.

Runs as part of the Dublin Fringe Festival until Sunday, September 15th

Antonia Campbell-Hughes: ‘I like hard graft. That’s what I believe in’
9