Making a Mark review: A life worthy of celebration

Dublin Fringe Festival: The victories and tragedies of Mark Smith recounted through interview and performance 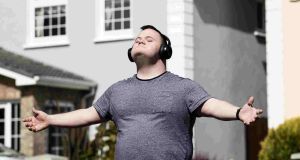 Cube, Project Arts Centre
★★★☆☆
Making a Mark has a dual purpose: to document the life experience of its co-creator, Mark Smith, and to enable him, an actor with Down’s Syndrome, to achieve his creative potential; basically, to make his mark. Smith is joined on stage by “his assistant”, Aisling Byrne, who facilities the telling of Mark’s story by interviewing him on stage and taking on his persona at key moments. This is both powerful and problematic storytelling. We just don’t hear enough from him first-hand during the 60 minute show. The most effective scene unfolds when Smith replays an encounter with a nasty doctor by finding his voice and speaking out against her. Writer and director Shaun Dunne nimbly sculpts the autobiographical material into a coherent narrative, counterpointing Mark’s victories and tragedies, but there is a troubling sense of tribute in the play’s final third. In her opening gambit, Byrne asks Smith to imagine his own funeral, and Making a Mark looks something like it. The life, perhaps, is worthy of more celebration than the show.

‘Heathers’: 30 years on – how the dark teen comedy predicted everything
Real news has value SUBSCRIBE