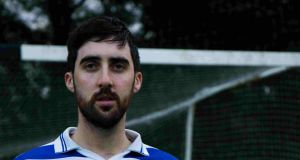 Meeting point at Jones’ Road entrance to Croke Park
★★★☆☆
Many plays can take time to warm up, but it’s literally the case in this imaginatively staged production. Before the audience can take their places, they don Gaelic football jerseys and are put through their paces with a series of exercises, all to recreate the atmosphere of the dressing room where Alan Bradley performs his piece. But if the kinetic team-building and GAA trappings grab the attention, they are misleading as to the main theme. As Bradley paces around like a bainisteoir giving a pre-match talk, he tells of his devotion to his local Cavan club, only for romantic missteps, college pressures and footballing injuries to make his behaviour more unhealthily obsessive. Under Elif Knight’s direction, Bradley tells his story with verve and veracity. And while the script could use more nuanced characterisation, the crucial point – about how ostensibly sporty young men block out mental health issues – is well taken.

Runs as part of the Dublin Fringe Festival until Thursday, September 19th