The comedian on Zoom cheats, stand-up and ‘beating the s***’ out of a chicken breast 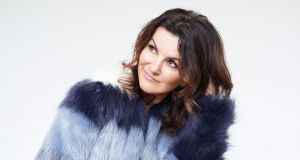 Deirdre O’Kane: ‘I mean, the home-schooling. Jesus, what a disaster’

“My son was expelled from home school today,” Deirdre O’Kane says with a blend of weary exasperation and barely suppressed laughter that seems perfect for days in isolation.

The comedian, actor, writer and damn fine Dancer with the Stars is holed up at home in Dún Laoghaire, in Co Dublin, with her husband, the producer and director Stephen Bradley, and their children, Holly, who is 15, and Dan, who is 11.

There she is, in her soft grey robe on the bed (I think), FaceTiming from a white room at the end of the day. “I mean, the home-schooling. Jesus, what a disaster. I know people do it, but, well, I wouldn’t do it in a million years. They’re on their Easter holidays now. So that’s hilarious. In fairness to Holly she is totally self-sufficient.”

Right now, life seems to be centred around meals. Tom Dunne wrote that ‘the evenings are set aside for weight gain’, and that’s it entirely

O’Kane and Bradley take home school in turns. Both of their children’s schools were “incredibly good at setting the day’s work and the online classes. I could hear the teacher teaching the Zoom class, and it was very impressive. She was calling the roll… Are you there, James?

“Though it’s a double-edged sword. My favourite story of Holly’s was that some people, asked a question by the teacher, pretend the screen has frozen. So they’re in the middle of... and... sorry, what did you..?” O’Kane halts midsentence. “And they freeze. Ingenious! She said one day the child froze, and next thing somebody says, ‘His clock is moving there in the background!’ He was caught!”

The main difference in O’Kane’s life during the coronavirus crisis is that all of her live work has disappeared, she says. “This month I’d be in the Olympia, shooting my show for Sky.” She was all set for Deirdre O’Kane: Live from Dublin, filming five one-hour stand-up shows, with guests and a house band, produced by Bradley. “It’d have been lovely. It’s not cancelled, but it’s postponed till February.”

For all that there’s a pandemic swirling around, she’s trying to write new comedy for a tour in September. “When you’re writing stand-up you have days where you can be very productive and days where I just have to accept that... Sometimes I’m ruminating on things and not writing anything down but just churning stuff over, so you feel you have nothing – but, actually you probably have.”

She’s not writing about corona, though. “I hope it’ll be over. Even if it’s over it’s still going to be part of our psyche.” Ironically, she named the show – Demented – before Covid-19 came into our lives. “It’s about being fiftysomething, everything that goes with that territory,” she says.

“My income is gone. You don’t get paid to write. I have plenty to be doing, with the tour in September, so please God that show will still go on the road. For the moment I’m just grateful I’ve got something on the horizon that I can at least be creating something.”

I’m a rubbish cook. But I adore food. I took down the chicken paillard recipe and I thought, I am going to make this if it kills me

She and Bradley have a home office, so neither was going out to work; he has just finished a script with a writer in London, looking for development money. She misses live gigs where she’d try out new stuff. “That feeds the writing. A couple of times a week I’d try a new 20 minutes” – in Bray, Dalkey, the Comedy Crunch at the Stag’s Head pub in Dublin, or the Comedy Cellar at the International Bar. “I pop into those clubs, unannounced. It’s fun. I really enjoy it.”

She walks one of Dún Laoghaire’s piers daily, as always, and, “right now, life seems to be centred around meals. Tom Dunne wrote in the Sunday Business Post that ‘the evenings are set aside for weight gain’, and that’s it entirely.”

What’s she cooking? “Every cookery book has come down off the shelves. My original mission was to bake bread, but that hasn’t happened. The quesadillas happened. I was bloody delighted with them. That’s good war food: comfort, easy, handy, war food.”

“I’m a rubbish cook. But I adore food. I’ve always used the excuse that I’m on the road so much I get out of the habit. So I’m sure I’m improving. I took down the chicken paillard recipe and I thought, I am going to make this if it kills me.”

She describes her plans. “You flatten the chicken, so it’s really thin, and you marinate it in lemon and garlic and parsley. And you literally sprinkle it with loads of rocket and lemon and olive oil. That’s it. I have the ingredients, but I need to beat the s*** out of the chicken with whatever I have that’s heaviest, I suppose.

“The real upside is that everything is getting used. The barbecue, that’s come out and Steve is barbecuing. The NutriBullet had been gathering dust, and now everybody wants to make smoothies, so Holly is NutriBulleting.”

O’Kane, meanwhile, is painting rocks. “I’ve lovely pebbles, and I’ve painted angels on them and names and all kinds of things. I found a big bag of acrylic paints. And the minute you press Pinterest – “painting rocks ideas” – Oh my God. Now, I haven’t started talking to them yet! I must say, I was particularly happy with me rocks I painted today.”

Dan comes into the room, and his mum sends him out to get one – “You’ll be delighted.” They’re drying in the sun. “It’d be nicer if it was sun-dried tomatoes, but nevertheless.”

O’Kane and Bradley can’t visit either of their parents. “We are one of those families who’ve been trying to talk to Steve’s parents in Wicklow through setting up the Zoom. We haven’t achieved it yet. They’ve been in total isolation.” Her mother is in Co Louth, where her sister moved after her dad died, 18 months ago.

“I have very close friends in complete lockdown in Madrid. Talking to them really brings it home how lucky we are. They have an apartment, and their boy, who just turned six, hasn’t been outside the apartment for over three weeks. They’ve been sending me videos – they go out every night at 8pm to clap the healthcare workers and the people running the shops. They started off in the dark, and then, when the clocks moved forward, they could suddenly all see each other. She sent me a video of the entire street singing happy birthday to Louis. Honest to God, it was the most moving thing I ever saw.”

Listen, we’re being asked to stay at home and look at Netflix. And there’s no food shortages. Seriously, it’s totally doable and we’re so lucky

To keep anxiety at bay, O’Kane says, “I take a day away from the news completely. I’m kind of obsessed with what’s happening in America, the whole Trump situation. It’s very hard to drag yourself away from that. It’s easier said than done, but when you do let it go it’s so much nicer.”

She has two books on the go – Emily Maitlis’s Airhead and Actress by Anne Enright – “and after that it’s Netflix all the way. I’ve done every episode of Comedians in Cars Getting Coffee, and every My Next Guest Needs No Introduction, with David Letterman. I’m looking for something to get hooked on.”

“Listen, we’re being asked to stay at home and look at Netflix. And there’s no food shortages. Seriously, it’s totally doable and we’re so lucky. I often think about the people who are not lucky in this, living in a house that is not a peaceful house. They’re who I feel terrible for. Or people looking after a sick child or a disabled person.”

And is the Dancing with the Stars hero dancing around her kitchen these Covid-19 days? “No, I’m afraid I haven’t kept up the dancing. My excuse was that I’d no time… but now? No partner!”