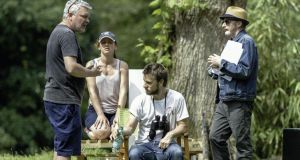 Corcadorca has been putting on plays in unusual places since its foundation in 1991. In the early years, a stage version of Anthony Burgess’s A Clockwork Orange saw them bring audiences on a journey through the labyrinthine recesses of Sir Henry’s Nightclub, while disused buildings became the atmospheric sets for dark psychological dramas like Sarah Kane’s Phaedra’s Love.

On Good Friday in 2000, they turned a crowd of thousands into pilgrims, following The Trial of Jesus through the city streets to Patrick’s Hill for his crucifixion. In later years, large-scale site-specific drama became the company’s calling card. They took Shakespeare into Cork’s public parks and rediscovered the city’s industrial heritage in such productions as Ger Bourke’s Snap at the IAWS warehouse, Ray Scannell’s Losing Steam at the Old Ford and Dunlop factory sites, and Georg Buchner’s Woyzeck at the naval base on Haulbowline Island.

Last year’s production of Enda Walsh’s The Small Things, performed in the courtyard of the Old Waterworks building on the Lee Road as part of the Cork Midsummer Festival, was exemplary of Corcadorca’s modus operandi. Designer Aedín Cosgrove provided a multilevelled scaffold set for actors Peter Gowen and Pauline McGlynn to perform upon, but the primary visual draw was the slowly darkening sky.

As Corcadorca’s artistic director Pat Kiernan affirms, when you are making work outside of the theatre “the site speaks as much to what you are doing as any other part of the performance”.

Corcadorca was due to bring a different kind of production to life at this year’s Cork Midsummer Festival, with the premiere of a new play by Eadaoin O’Donoghue at the Triskel Arts Centre about a couple having a baby during the apocalypse; a theme surely more timely than the company could have predicted.

Despite the resonance, as Kiernan explains over the phone from his home in the seaside suburbs of Cork, “it became clear very quickly that the production was not going to go ahead as planned. We had a week of workshops scheduled, and we tried doing that, like everyone else, on Zoom, but [the production] we had planned was a small theatre-based piece, which was written to be performed in an intimate setting, and it became clear by the day that wasn’t going to happen.”

By the end of March, the show was officially cancelled.

Like colleagues all over the country, Kiernan watched as theatre companies across the world quickly started to adapt to the new environment, which made live performance as we know it impossible. The answer seemed to be online, whether that was live streaming of events or providing access to recorded footage.

Indeed, for World Theatre Day, Corcadorca released a recorded version of its 2015 production of Enda Walsh’s Gentrification at Cork Savings Bank on Vimeo. However, Kiernan became “exhausted by all the work going on online; it very quickly reached a threshold very quickly for me”.

He began to think about the challenges of creating a live experience within the confines of government guidelines. Because the company is not a venue (although it does run the Theatre Development Centre at Triskel Arts Centre), Kiernan says “we were at an advantage of sorts. We were used to making work outside of traditional theatre spaces, so I knew we could pull something together outside of an auditorium, where you couldn’t obey social distancing guidelines.

“I mean the Abbey and the Gate would hold only 30 and 20 people if they were to meet the guidelines, so [a traditional model] just doesn’t work with the economy of theatre production. But I was also interested in examining the theatricality of social distancing itself.”

Kiernan became excited by images of people trying to communicate despite the physical barriers that exist – relatives speaking to each other through windows, for example – and began to conceive of the idea of an estranged couple making contact in that environment. After seeing pictures of community film-screenings, he started investigating ways of “making something mobile that we could bring to people rather than expecting people to come to us”.

Reversing the traditional model by bringing theatre to the audience also chimed with the new hyper-local reality of life during the pandemic.

“We can only really control or be in charge of our own environment,” Kiernan says, “so it seemed a logical thing to bring the work to places where someone could watch from the safety of their own home, if that’s necessary for them: from their bedroom or living room window, from their own garden, if that is what is most comfortable or safe.”

The vital thing for Kiernan, however, was that the performance would be “experienced collectively. That is the big difference from watching a piece of theatre online. The audience would be experiencing it together, not apart.”

Kiernan credits the Arts Council with allowing Corcadorca the flexibility to use its funding to create this new spontaneous project called Contact, a non-verbal piece to be performed on public green spaces in housing estates across Cork city. Kiernan gathered his collaborators – actors Eadaoin O’Donoghue and Cormac Mohally, lighting designer Michael Hurley, set designer Owen Boss and costume designer Valentina Gambardella – on Zoom and the production began to take shape.

Contact is played out on either side of a perspex wall, as two socially distanced actors enact a drama of estrangement and reunification. The two performers, Kiernan explains, are trained in the highly physical discipline of Jacques le Coq, “so they are used to delivering big performances”, which will help audiences follow the narrative from their viewing distance. Given the highly public nature of the show’s delivery, the building of the performance space and lighting rig will become part of the performance too.

“Because of the nature of the space,” Kiernan elaborates, “the audience will witness the visual set-up of it one way or another, so we can use that to add to the experience.” The crew, dressed in the necessary costume of full protective gear, will sterilise, build, dismantle and re-sterilise the area as the performers enter and leave the space.

By necessity, the details of the performance sites remain a secret. “We have to be very careful, on the one hand to let the residents know that we are coming. But at the same time we can’t let that out to the public, because we don’t want crowds to gather.” Even so, Kiernan is conscious that, “an awful lot more people will see it than would have seen the show in Triskel. That wasn’t the thinking, but it is often the case when you are making work outside of a theatre space.”

The circumstances in which Corcadorca has created Contact have also forced the company to think further about the future possibilities of live performance in a sector riven by uncertainty.

“The arts are in a particularly precarious position right now,” Kiernan concludes, “because even when – or if – theatres open again, we have no idea how many people will actually want to come and share a space in the same way that we once did. So, if the idea of live experience as we know it is no longer possible or what people want, we have to start thinking about making work in a different way.

“What are the new experiences we can think about? Does theatre become really huge, performed at beaches, say, where there is so much room for people to distance? Or does it become incredibly intimate, a type of individual experience, a theatre for one?” (An idea, ironically, which was executed to impressive effect by Landmark Theatre at last year’s Cork Midsummer Festival.)

Ultimately, the arts are always influenced by the conditions under which they are allowed – or forced – to take shape. But Kiernan remains hopeful that “we will be given time and space to collectively reimagine what role theatre might play” in rebuilding our communities.

With Midsummer Moments, Cork Midsummer Festival has come up with a variation on its traditional two-week festival programme, offering a variety of arts events and experiences programmed within Government guidelines.

Outdoor events include Corcadorca’s Contact; New Light, a billboard walk across the city created by eight visual artists; and a site-specific audio walk created by Tom Lane and narrated by Mark D’Aughton and Olwen Fouéré.

Audiences are also invited to participate from home with Little Druids for Humanity, a long-distance arts project based around themes of magic; and BINGE, which matches artists with individuals to transform television watching into a communal experience.

Corkonians are also invited to become artists themselves, and join festival artists-in-residence Leon Butler and Peter Power in sharing their own lockdown experience via 3D imagery as part of Shelter & Place.

Contact will run at various locations across Cork city from June 11th-21st as part of Cork Midsummer Festival’s Midsummer Moments, a series of digital events and live experiences. corkmidsummer.com