Bold Moves: Ballet Ireland scores a coup with heart-pounding performance of Minus 16 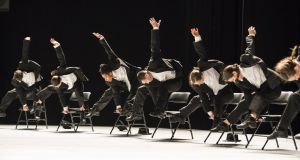 Ballet Ireland’s three-part evening of contemporary dance opens with two performances that serve like amuse-bouches for the final course. Zöe Ashe-Browne’s Us offers an amenable introduction to the evening’s less classical look in choreography full of fluid, unexpected arm gestures and torso contractions. She’s a young choreographer discovering her style and her casual, low-to-the-ground leg flicks and hip swivels indicate she is stepping beyond her traditional ballet background to do so.

By contrast, Israeli choreographer Ohad Naharin’s Minus 16 explodes with power and energy from the minute the 16 company members begin shouting from their chairs in a semi-circle around the stage. Naharin began making dances for Batsheva Dance Company in 1990, propelling that Israeli troupe and his own choreography into the world spotlight. In 2015 he was the subject of a documentary Mr. Gaga, emphasising how his movement language called Gaga has influenced the contemporary dance world internationally. Ballet Ireland scored a coup in securing permission to perform Minus 16, a hopeful sign of the company’s future direction and investment in this kind of repertoire.

Before the curtain rises on Minus 16, Seu Kim offers a hint of uncertainty as he glides around the stage, alone. Once the music intensifies and the group assembles, they move in such heart-pounding, foot-thumping unison their intensity proves as satisfying to watch as the more refined and thoughtful steps later on.

Naharin’s ethos, “dance is for everyone,” proves infectious for Ballet Ireland as they throw off hats, suit jackets - even shoes - during the beginning of Minus 16, a metaphor for how much they will throw the audience/performer relationship off balance during the rest of the show.

The company members, particularly Rodolfo Saraiva, embrace dance’s inherent, egalitarian joyfulness so that from the instant the performers step off of the stage and into the aisles, the audience interplay becomes immensely fun.

Naharin grew up amidst tumult in his country yet adhered to dance as a source of vitality and discipline. Luckily for anyone who experiences Minus 16, that passion still strongly reverberates.