A queer céilí takes pride of place in Belfast 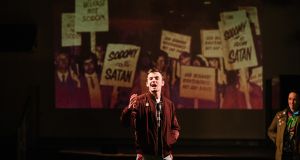 Chris Grant in A Queer Céilí at the Marty Forsythe. Photograph: Loretta Hurson

It’s a bright new day for the LGBT+ community on the morning after Westminster MPs voted by 383 votes to 73 to allow same-sex marriage in Northern Ireland. The proposal, tabled by Labour MP Conor McGinn, who grew up in south Armagh, obliges Secretary of State for Northern Ireland Karen Bradley to put through regulations to change the existing law if a powersharing Assembly is not in place by October 21st.

“As soon as I heard the news, I headed into town,” says Montague, whose plays highlight the struggle for recognition and equality within a community which has long existed under disapproval and prejudice.

“When something as seismic as this happens you want to be part of it. There was a lot of excited talk about what it means, what it could mean for the future and how much things have changed.”

Tyrone-born Montague’s first full-length play Quartered was premiered by Kabosh at the 2017 Outburst Queer Arts Festival. It is an audio promenade through Belfast’s Cathedral Quarter, historically the city’s gay quarter. It plunges participants inside the mind of a young gay man, seeing the area from his personal perspective. Montague plans to work with artists in other cities to adapt the piece for their respective environments.

His second, A Queer Céilí at the Marty Forsythe, dramatises a little known real-life event and was premiered in March at the venue where it originally happened. At the end of the month, it will return there during Belfast Pride.

'As an activist, your voice can transcend barriers. You might have a personal cause that means a lot to you but you can use that voice to help other people as well'

In 1983, the year after homosexuality between adults was legalised in Northern Ireland, the National Union of Students’ annual Lesbian and Gay Conference was organised in Belfast for the first time. What awaited the new arrivals at the gates of Queen’s University was a vitriolic Save Ulster from Sodomy demonstration, part of a political campaign launched by the Democratic Unionist Party and the Free Presbyterian Church. In response, the students let rip with their own Save Sodomy from Ulster protest.

The play recalls the night a convoy of black taxis brought a group of conference delegates to a ceilidh in the Martin Forsythe Social Club (now Trinity Lodge) in republican west Belfast, at the invitation of the local Turf Lodge community. During the evening, new friendships were formed and unlikely allegiances made between groups of people who were labelled social outcasts.

“When homosexuality between people aged over 21 was legalised here, young people felt even more disenfranchised,” says Montague. “It made life really dangerous to be of a certain age and gay. That would have been the case with many of the students coming from across the water for the conference.

“The play is about intersectionality; it’s about gay rights but it’s also about women’s rights, rights for one and rights for all. It’s about the rights of anyone who has ever felt ‘othered’. As an activist, your voice can transcend barriers. You might have a personal cause that means a lot to you but you can use that voice to help other people as well.”

In the audience on opening night were two men who were at the ceilidh in 1983. Dr Jeff Evans is a Research Fellow at John Moores University in Liverpool and a member of the academic advisory panel of OUTing the Past: The International Festival of Lesbian, Gay, Bisexual & Trans History. Beside him was Belfast native Tarlach Mac Niallais, who, since 1985, has lived in New York, where he manages programmes for adults with learning difficulties.

“Myself and Tarlach cried throughout the performance,” says Evans. “It was a very physical reaction, just tears dropping off my face.”

'They didn’t want the issues of human rights, civil liberties and the war in Northern Ireland linked or, "to infect our politics". Not rocking the boat was very important'

“Several parts of the play brought me to tears”, agrees Mac Niallais. “Some were happy tears, prompted by memories of events which seemed funny at the time. But there were upsetting memories too. A well of emotions bubbled up, from living here through that whole era. Mainly, they were tears of pride that we had reached this point.”

The two first met at the 1982 conference in Manchester, at which Mac Niallais was a speaker. Evans recalls the battles fought by the lesbian and gay students’ campaign with the national executive of the National Union of Students (NUS), who consistently refused permission for the conference to come to Belfast.

“They didn’t want the issues of human rights, civil liberties and the war in Northern Ireland linked or, as it was put, ‘to infect our politics’. Not rocking the boat was very important.”

When the NUS bowed to the campaign’s overwhelming wish, Evans came over on a scouting trip. He recalls walking along the Falls Road with Mac Niallais and being shocked at his friend’s indifference towards the presence of armed soldiers. He remembers DUP demonstrators screaming abuse at the visiting students and says he was possessed by a constant fear of ensuing violence.

“At the céilídh, people clapped us in and gave us the place of honour, close to the stage. I was as nervous as hell, because of all the media propaganda I’d been fed about the Irish community. I was waiting for the music to stop and the boys to come over and give us a good leathering.

“As the pints went down, I dashed to the toilets. Three lads put their heads around the door and asked, ‘are you one of the queers from Manchester?’ I thought I was in for it but they just wanted to ask if we had the same problems with the police as they did. I could have wept – the solidarity, the common ground. My queerness was incidental.

“In the hall, the boys came over and asked us to dance. Imagine, me dancing with a man in a working men’s club! People were smiling at me. For the first time in my life I was accepted in an unconditional way. It was a remarkable and very special evening.”

Mac Niallais grew up in Newington in north Belfast but moved into Divis Flats when he was 18. “My parents threw me out when I came out. A few months later, we made up our differences though.

“In August 2018 I came home from New York for Pride and had all 62 of my family with me at the parade. The bars and clubs in west Belfast were festooned with rainbow flags, even one in Newington which had once banned me for kissing a boy.

“The family came along to the play in March. It was an emotional occasion. It gave me a strong sense of validation for what we’ve achieved in all these years of activism, getting those students over in 1983 and how far we’ve come since then.”

The play is dedicated to Evans’s husband Dan, who took his own life in the summer of 2018. “It was, in part, the result of low self-esteem engendered by being raised in a deeply macho world that projects the message that there is only one way of loving,” he says.

“As a society we have begun to climb out of the dark. The sunlit uplands are in view but there’s still a fair way to go.”