Noah’s arc: from Apartheid to biting jokes about race

Having grown up in South Africa with a black mother and white father, comedian Trevor Noah has a wide perspective on life 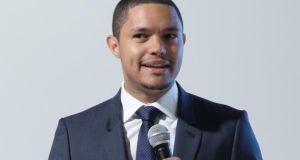 Trevor Noah: a firm believer in the dictum that a comedian’s first and last purpose is to make people laugh and not be a hectoring, socially relevant buzz-kill

‘I was born a crime,”says the fast rising South African comic Trevor Noah. The personable 30-year-old means it literally. Born to a black South African mother and a white Swiss father in apartheid South Africa, his criminal status as a mixed-race child from a legally forbidden liaison has informed his worldview and his comedy.

When he was a child, he observes, his mother would walk ahead of him in the street, pretending not to know him – “I felt like a bag of weed” – while his father walked on other side of the street, waving to him “like a creepy paedophile”.

But his mordant riffs on race and ethnicity form just one part of his comedic repertoire. Noah is the next big thing. With material that travels well, a developed sense of stage performance, an edgy undertow to his work, and, having conquered South Africa as the country’s first comedy mega-star, he has now made dents in the US and UK markets. He makes his Irish debut tonight at the Vodafone Comedy Festival in Dublin’s Iveagh Gardens.

Noah became the first African comedian to land a slot on Jay Leno’s Tonight Show, which led to a rash of bookings stateside. On this side of the pond, his 2012 debut at the Edinburgh Fringe Festival led to a sell-out London theatre run. The producer of his Edinburgh run was one Eddie Izzard, who had caught an early club date of Noah’s and was impressed enough to step in as an unofficial mentor.

Noah didn’t know who Izzard was when they first met. “It was just a meeting of two comedians in a club that had no clue who the other was, which was great,” he says. “His endorsement has always been great because I can blackmail the audience with the phrase ‘Well, Izzard thought that joke was hilarious’.”

That breakthrough Edinburgh show was called The Racist. He used the hour-long slot to lay bare his slightly surreal upbringing whereby his family had to lie to their Soweto neighbours to cover up his light- coloured skin: “I was an albino, although an albino that never got sunburn.”

Because of the hateful stupidity of Apartheid, Noah’s racial identity has been reclassified three times during his lifetime. Growing up, he couldn’t be seen in public with his parents as they would have been arrested.

How he deals with race material in his South African set is different from how he will treat it in Ireland. In his native country, race relations are still a hot-button topic; in Europe, it tends to be news-dependent.

“For the Dublin shows, people will find out that, as a comedian, I am shaped by where I’m from and who I grew up with. In my case, that is growing up in Soweto,” he says.

“But when I first started doing stand-up, I just wanted to make people laugh. That hasn’t changed, but over time I’ve come to realise that, while talking honestly on stage to your audience, you start to share your views and opinions on matters of the world, and that becomes a great way to connect with like-minded individuals in your audience.”

There is no brow-beating in Noah’s work – he’s not the sort of act who gets people walking out on him. He is a firm believer in the dictum that a comedian’s first and last purpose is to make people laugh and not be a hectoring, socially relevant buzz-kill.

His background necessarily made him a cultural chameleon. He would speak one way to certain members of his family and in a different way to his other relations. It has helped make him a proficient mimic; don’t be surprised if Irish speech patterns get put through his comedic mincer.

Calling his show The Racist was a head-turning idea. Was this a show of or about racism? It’s something he plays on well: he has a section in which his dual-identity upbringing allows him to say, “That’s racist, but I can see where you’re coming from”. He is in talks with a US network about a sitcom based on his upbringing.

Stand-up is still developing in South Africa, but Noah’s appearance on the Jay Leno show was seen as a breakthrough for the new comedy scene in the country.

He has long since got over the fact that he’s “starting again” when abroad, having become accustomed to a more exalted status back home. “I’m unknown in more places than I’m known. I’m well used to that now,” he says. “So the luxury or curse of instant gratification is not one that I’m having to face regularly.”

Noah is learning German so he can communicate with his father in his native language. He also hopes to do a stand-up show in German at some stage. He came close to growing up in Switzerland, but his mother always vetoed the idea. She wouldn’t give the South African authorities the pleasure of having her leave.

As a South African, you can’t let him go without asking his opinion on the Oscar Pistorius trial. He has already got himself into trouble back home for tweeting recently “And the Oscar goes to . . . jail”. He mentions a superb taboo-smashing line about what he and Pistorius have in common in terms of their aspirations, but it’s best not to repeat that here: go along and hear it live.

GUARANTEED LAUGHS: FIVE OF THE BEST AT VODAFONE FESTIVAL

A fantastic talent with a regular slot on the TV show Chelsea Lately and a big-selling comedy album, Hail to the Freaks. Has a great gags-per-minute ratio and some fresh, twisted observational work.

If you watch TV comedy panel shows, you will already have heard a lot Jones’s material – he is one of the most ripped-off comics in existence. You can appreciate why: this is beautifully sculpted work from a great comedy craftsman.

There’s an awful lot more to her than court reporter Ursula McCarthy on Irish Pictorial Weekly: Tiernan is one of the brightest talents around, and can effortlessly mix intelligent insight with poetic filth. You won’t hear better timing and delivery anywhere at the festival.

Consistently underrated. His nice-guy persona disguises a cutting comedy brain. He can appear a bit too laid-back at times, but he has it all, including excellent improv skills.

He has sold out London’s O2, and he stars in BBC’s Russell Howard’s Good News: guaranteed laughs, then.