My wife and my comedy life: John Bishop opens up 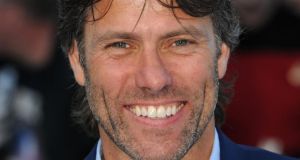 Stick Your Job Up Your Arse was the title of John Bishop’s first professional show at the Edinburgh Fringe Festival six years ago. The venue was a hut, the audiences were small and he worked his socks off to convince us that he was now a real comic. He was in debt at the time, his marriage was shaky and he had walked away from a high-flying corporate job to perform to three drunks and a dog in a glorified shed. You could see the fear in his eyes.

Bishop will never need to use that show title again. His current job is as a multi-millionaire comic, one of the most talented of his generation, beloved of massive, arena-sized audiences. But next weekend (July 26th to 28th) he’ll be doing one of his smallest shows for a very long time when he appears at the Vodafone Comedy Festival at Dublin’s inviting Iveagh Gardens.

It’s pretty clear the affable Scouser regards himself as the friend- in-the-pub-type comic. Though he is somewhat distressingly described as “the working class Michael McIntyre”, Bishop’s great gift is to bring a new level of artistry and sophistication to that much-trampled-over genre, “bloke” comedy.

“Sure I can talk politics, I can talk economics, I can talk about the books I’ve read but I see my job as looking around for funny stuff and then telling it in a way that people enjoy.”

But as a newly minted multi-millionaire and showbiz star he can’t get away with telling tales of working-class Liverpool life – or describing a family trip to the local tip as “a day out”.

“Of course you can’t,” he confirms. “And you won’t find me complaining about the price of bus fares these days, but what I can do is to talk about my life as it is now, the ridiculous showbiz situations I find myself in and what it’s like to see your face plastered all over a giant advertising hoarding. I’m not in a Jacuzzi sipping champagne all day.”

A vegetarian, fanatical Liverpool FC supporter and Labour Party supporter, Bishop wears his allegiances on his sleeve. Seemingly perpetually chirpy and quip-ready, it was an unlikely early mid-life crisis that caused him to walk out of his high-flying marketing job and onto the unforgiving treadmill of unpaid open-mic spots in dingy comedy clubs.

“In my late 30s, I was married with children, had a great job, a mortgage, a pension plan, BUPA health insurance,” he says. “There was a company car, credit cards, the lot but I walked away from it all, and foolishly so, because I had this mad idea that I could make strangers laugh. Yes, my mates in the pub had told me I was funny but that wasn’t good enough for me and I had to give up my life and start on the bottom rung of the comedy ladder to prove it to myself.”

It didn’t help matters that at the time his marriage was collapsing and he was heading for divorce. But, in a twist straight out of a Mills and Boon novel, he found himself performing at a comedy club in Manchester and he didn’t know it but his estranged wife was on a night out with her friends at the club. She had no idea he was now doing stand-up comedy, but, she says, she fell in love with him all over again that night.

She recognised the man she had once known, the one who made her laugh. They’ve been back together since.

“It wasn’t as if we had left each other, we had just got to a stage where the marriage wasn’t working and we sold up the house and went our separate ways,” he says. “What killed me was only seeing the children at weekends. When they went back to their mother on a Sunday night I used to go out for a drink. That’s really why the stand-up started. There was a place near me that was a comedy club and there was a cover charge to get in but if you put your name down to do an open spot you got in free.”

With no notion of what to do as a comedian, he started talking about his marriage break-up, turning heartbreak into hilarity, and in a sense he’s been doing the same thing since.

Almost all of Bishop’s material is rooted in reality, in incidents that have happened to him or those around him. It’s how he mines this material, though, that makes all the difference – he has an almost forensic ability to bore directly to the comedy core of any given story.

“When I go to a comedy show, I like to think I’ve got to know the person on stage, I’ve learned about their life,” he says. “And that’s all I can do – get up there and present myself, say ‘here’s how my life is now’, and hope for the best.”