More shows announced as Monty Python sells out in 43.5 seconds 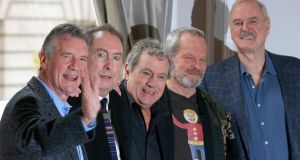 The remaining members of Monty Python have announced four more shows after their reunion at London’s O2 sold out in less than a minute.

The veteran comedy troupe — John Cleese, Michael Palin, Eric Idle, Terry Gilliam and Terry Jones — announced they were getting back together last week.

A spokesman for the Pythons said the July 1st event sold out in 43.5 seconds this morning and tickets for four further shows had immediately gone on sale.

The concerts at the venue in Greenwich, southeast London, come more than 30 years after their last stage performance.

Speaking at last week’s press conference, they said they would include some of their most famous routines including the dead parrot sketch.

But Cleese ruled out a re-run of one of his best loved moments, the Ministry of Silly Walks, saying: “I have an artificial knee and an artificial hip so there’s no chance of that”.

Idle said fans could “expect a little comedy, a lot of pathos, some music and a tiny bit of ancient sex”.

Their last major live show was at the Hollywood Bowl in 1982.

The Pythons amassed millions of fans for their groundbreaking, anarchic comedy series and films, which also launched their own successful solo careers.

Monty Python’s Flying Circus was made for TV between 1969 and 1974 and generations of fans can recite lines and whole sketches. The team went on to make films including Monty Python And The Holy Grail (1975) and Monty Python’s Life of Brian (1979).

Sixth Python Graham Chapman died of cancer in 1989 aged just 48, and nine years later the five remaining members shared a stage at the Aspen Comedy Festival in the US. They said they would miss performing with Chapman but he would have a presence on-screen during the show.

Idle said: “We’ve told him we’re going on and if there is a God, he’ll be turning up.”