Science, sexism and the 'trouble with girls'

Sir Tim Hunt has admitted that it was “very stupid” to make “funny” comments about his female colleagues. He is not the first scientist to do so, and it's unlikely he'll be the last 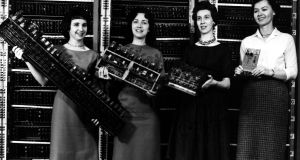 Some of the women responsible for programming the first all-electronic digital computer. They were considered by their employers to be suitable for the job because women were already working as switch operators at telephone exchanges

Misogyny in this time of “political correctness” is very good at covering its tracks, even when it’s been hiding in the open.  Sir Tim Hunt (72), a self-confessed chauvinist who won the Nobel Prize for physiology or medicine in 2001, has blown a canyon-sized hole in  the glass ceiling for women scientists by exclaiming: “Let me tell you about my trouble with girls. Three things happen when they are in the lab: you fall in love with them, they fall in love with you and when you criticise them, they cry.”

By the time his comments to delegates at a conference in Seoul, South Korea, got back to University College London, where he was honorary professor, he chose to resign, but justified his comments as humour, though he admitted it was “very stupid” to make “funny” comments in the presence of journalists. What about the presence of women scientists, his colleagues?  They were stunned into silence.

Defending his remarks, Hunt stated: “It’s terribly important that you can criticise people’s ideas without criticising them and if they burst into tears, it means that you tend to hold back from getting at the absolute truth. Science is about nothing but getting at the truth and anything that gets in the way of that diminishes, in my experience, the science."

Men are rational beings. Women aren’t. Oh no. Women are doormats with menstrual cycles likely to burst into tears at the drop of a hat.  But they are very good at supporting male scientists. It’s not just science where institutionalised misogyny lingers like smoke.  In 2009, Ireland had the second highest glass ceiling index for women in higher education.

According to the Department of Education and Science in 2005, 40 per cent of men graduate with higher degrees and 90 per cent become professors.  Sixty per cent of women graduate with higher degrees and five per cent become professors. A graph can be found here which illustrates the point with alarming clarity. Women do better in the Leaving Cert and at every other level until it comes to employment in academia.

And in case you're in any doubt about the historical dimension to this, here's a short list featuring just a few of the many ground-breaking female scientists whose achievements have been buried in history.

The Women of ENIAC
A team of women who were the first to program ENIAC, the first all-electronic digital computer.  They were chosen because women were already working as switch operators at telephone exchanges. When the work became lucrative, this programming became a man’s job.

Ada Lovelace
The true mother of the computer, programmed the first mechanical computer – the Analytical Engine – in the 19th century. The only child of poet Lord Byron, the credit for her work was claimed by  family friend Charles Babbage, who later became known as “father of the computer”. Lovelace’s notes on the engine include what is recognised as the first algorithm intended to be carried out by a machine.

Rosalind Franklin
A pioneering molecular biologist – responsible for much of the research and discovery work that led to the understanding of the structure of DNA. Franklin led pioneering work on the molecular structures of viruses, including the tobacco mosaic virus and the polio virus. After struggling to be recognised for her work, rather than merely being part of a senior male’s team, she died of ovarian cancer at the age of 37. Continuing her research, her team member Aaron Klug went on to win the Nobel Prize in Chemistry in 1982.

Katherine Johnson
An African-American physicist, space scientist and mathematician who contributed to America's aeronautics and space programs with the early application of digital electronic computers at Nasa.  Women then were not listed as co-authors on scientific papers, and were referred to as “computers in skirts” because of their math abilities. Johnson calculated the trajectory for Project Mercury and the 1969 Apollo 11 flight to the Moon.

Mary Anning
A world-reknowned palaeontologist who was never allowed to join the Geological Society of London because she was a woman/ She made important finds in Jurassic marine fossil beds in the cliffs along the English Channel, in southwest England. Her discoveries changed thinking about prehistoric life and the history of the Earth.

Emmy Noether
A groundbreaking mathematician in abstract algebra and theoretical physics, but allowed others to be credited with her work. Despite being described by Albert Einstein, amongst others, as one of the leading mathematicians of her time, she spent four years teaching under the name of a male colleague  - as women were shunned from academia. Noether was so generous with her ideas that several lines of her research were published by other mathematicians.

Lise Meitner
An Austrian physicist whose work on radioactivity and nuclear physics led to the discovery of nuclear fission. When her team colleague Otto Hahn was awarded the Nobel Prize for Chemistry in 1944,  Meitner was overlooked by the Nobel committee.

Ida Noddack
A German chemist and physicist and first person to come up with the idea of nuclear fission in 1934. With her husband Walter Noddack, she discovered element rhenium. She was nominated three times for the Nobel Prize in Chemistry but never won. Her work was always unpaid, while her husband was paid.

Sandra Moore Faber
Fwas part of the team that discovered a mass concentration in the universe known as "The Great Attractor". She was also the principal investigator of the Nuker Team, which used the Hubble Space Telescope to search for supermassive black holes at the centre of galaxies. In February, 2013 she received the National Medal of Science from US President Barack Obama.

Mary Sherman Morgan
A US rocket-fuel scientist credited with the invention of the liquid fuel Hydyne in 1957, the fuel which powered the Jupiter-C rocket that helped launch the United States' first satellite, Explorer 1, into space. When Morgan became pregnant out of wedlock, she had to have her child adopted by a cousin. She went on to marry and have four more children.

Margaret Hamilton
Hamilton is credited with saving the landing of the first moon mission with her brilliantly designed computer code. She was director of the software engineering division of the MIT Instrumentation Laboratory, which developed on-board flight software for the Apollo space program. Hamilton's team's work prevented an abort of the Apollo 11 moon landing in 1969, which landed the first humans on the Moon. In 1986, she became the founder and CEO of Hamilton Technologies, Inc. in Cambridge, Massachusetts. The company was developed around the Universal Systems Language based on her paradigm of Development Before the Fact (DBTF) for systems and software design. Hamilton has published more than 130 papers, proceedings, and reports concerned with the 60 projects and six major programs in which she has been involved.