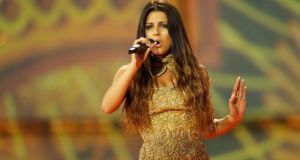 RTÉ is to scrap the mentoring process it has used to select the last five Eurovision entrants, but Ireland will not be pulling out of the competition.

Thursday night’s elimination of Can-Linn feat. Kasey Smith, who sang Heartbeat, is the latest dismal performance by Irish entrants in the competition which Ireland routinely won in the 1990s.

Despite a strong performance on the night, Can-Linn feat. Kasey Smith became the first Irish act since 2009 not to qualify for the final.

With the exception of Jedward in 2011 who finished eighth with Lipstick, Ireland’s record when getting to the final has been abysmal.

For the last five years RTÉ have used a mentoring system to select the act and the song which is then voted on by a public and jury vote.

Eurovision head of delegation Michael Kealy said the change in how Ireland selects its Eurovision entrant has been in train before this year’s competition in Copenhagen.

He said: “We have been reviewing the Eurovision selection process for some time and we are planning to make an announcement shortly about changes to how we select Ireland’s Eurovision act.”

However, RTÉ has no plans to pull out of Eurovision altogether because it remains a popular television event despite Ireland’s recent record.

He also pointed out that Ireland is not the only country struggling in the Eurovision as the Netherlands had failed to qualify for the final for eight years in a row before last year.

“It’s a huge competition with over 37 countries taking part this year and 26 in the final. Ireland’s participation in the competition always generates a huge amount of public interest and this is reflected in the viewing figures.

“ The Eurovision regularly features in top 10 Irish TV programmes of the year. Eurovision continues to be a hugely popular event on Irish television and across Europe. It’s unique and continues to attract new and younger fans. We will be confirming our plans for the selection process for next year’s contest in the coming weeks.”

Mr Kealy declined to say how much it costs RTÉ to enter Eurovision every year describing the information as “commercially sensitive, but this year we have one of the smallest delegations in Copenhagen. Over the past number of years we have significantly reduced the budget while also putting together a polished professional performance fit for the Eurovision stage.”

Louis Walsh, who was one of the panel for this year’s national song contest, blamed the staging of Ireland’s entry for our premature exit from the competition.

“I though the song and singer were good enough, but I told her (Kasey Smith) to lose those dancers, because it is distracting from the song. The staging let us down. Her dress wasn’t great either. That being said, I was sure the song was going to get through.”

Mr Walsh said the mentoring process had served a purpose but it was now time to move on and get a professional singer and professional songwriter. “That’s what everyone else does. We have won seven times and we always won with ballads. I would get a great song and a great singer. Get professionals involved, people who write hits all the time.”

He suggested that Brendan Graham, who wrote the 1994 winning entry Rock ‘N’ Roll Kids, or three-times winner Johnny Logan should be involved the next time.

Songwriter Shay Healy, who wrote the winning entry What’s Another Year in 1980, described the staging as “very poor. They should have got rid of the dancers before they got to Copenhagen. The song was not particularly good either so that made it even worse and the attempt to celticise it wasn’t every successful either.”

Mr Healy said the Irish entrant should be “put back into the hands of professional songwriters who know what they are doing. There are far too many people writing what they think are Eurovision songs.”

If necessary, Mr Healy said the national song contest should be scrapped if the right song and singer is found.

“Common sense need to prevail at this stage. Chasing down a load of dance tracks is futile.”

Inveterate Eurovision watcher and political analyst Dr Adrian Kavanagh from NUI Maynooth blamed the staging of Ireland’s song Heartbeat rather than the song itself or the singer for our elimination.

He suggested that the national finals should be put on a big stage and the acts judged by the show that they will eventually bring to the Eurovision.