Plácido Domingo: ‘Are you going to prepare good weather for us, yes?’ 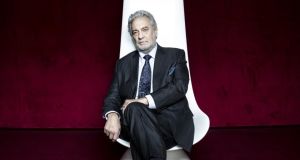 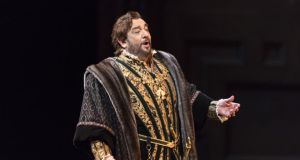 Reign of Spain: Plácido Domingo as Don Carlo in Ernani at the Metropolitan Opera in New York. Photograph: Jack Vartoogian/Getty

He has sung more than 140 operatic roles and made a record with Carlos Santana. He has run two opera companies, worked as a conductor, created an international opera competition. He has won 11 Grammys. He has been involved with an array of humanitarian projects. He has been on The Simpsons. He voiced the character of Monte in Beverly Hills Chihuahua. He has even written a song for his favourite football team, Real Madrid.

And that’s only a tiny fraction of Plácido Domingo’s CV. His musical career began in 1957, when he made his first professional appearance, with his mother, in a concert in Mexico. At the age of 74 he clearly isn’t planning to slow down any time soon.

He is, he says, looking forward to coming to Dublin to sing in a gala concert at the end of this month. “Are you going to prepare good weather for us, yes?” The famous Spanish voice pours from the speakerphone, smooth as a good Rioja, then chuckles. “Good weather, bad weather, doesn’t matter.”

“I like them because you have a constant contact with the public. So people react to you, directly. Even if it’s a big venue, it’s an intimate kind of feeling. When you’re doing a stage performance you are living a character and you are somewhere else, you know? You have a costume, you have scenery. With a gala you have to convince the public only with the voice. But the music is beautiful, and most of the things that they hear, they know them.”

Domingo ought to know. It was, after all, the gala concerts he sang around the world with his colleagues José Carreras and the late Luciano Pavarotti – aka the Three Tenors – that persuaded a generation that opera was a good thing. For many people who would still never dream of stepping into an opera house he is familiar from the annual televised Christmas in Vienna series, in which he has appeared with everyone from Diana Ross through Charles Aznavour to Michael Bolton.

At 3Arena he will be accompanied by the RTÉ Concert Orchestra, conducted by Eugene Kohn, and by two young and ultraglamorous American sopranos, Angel Blue and Micaëla Oeste, both of whom sing regularly with Domingo and both of whom, arguably, owe their careers to him. Blue emerged from his Operalia competition; Oeste was on his young-artist programme at Washington National Opera.

Passing the baton to the next generation of singers is, clearly, something Domingo believes is important. But he’s not ready to relinquish that baton just yet. This year alone he has made his debut in two Verdi baritone roles, Don Carlo in Ernani, at the Metropolitan Opera in New York, and Macbeth, at the Berlin Staatsoper.

“Yeah, well, they are not so bad, the ones I have played,” he says. “A couple of them. But even Macbeth, he’s a little bit of a victim of the lady.”

Each of the Verdi roles is quite distinct psychologically, he adds. Yet they share certain characteristics. “Most of the Verdi baritones they are parents, you know? They are fathers. Luisa Miller, Rigoletto, Boccanegra, Aida, I Due Foscari. Early in his life Verdi lost two children, so he wrote the most beautiful music – the most dramatic scenes – singing with a daughter or a son. I love the Verdi roles very much for that.”

Whether he can continue to sing them live is a matter of much debate among the opera cognoscenti. But when Domingo returns to his day job as general director of Los Angeles Opera this autumn he’ll be working with Woody Allen, codirecting a production of Puccini’s Gianni Schicci. “I’m going to direct and sing,” he says.

He sounds thrilled at the prospect. “I’m looking forward to it. I haven’t done that before.” At last: something Plácido Domingo hasn’t yet done. There can’t be many such items in the musical universe. Plácido Domingo is at 3Arena on Sunday May 31st

‘Do I really care?’ Woody Allen comes out fighting
4

The movie quiz: Who has never had a film banned in Ireland?
6

Lady Gaga: Chromatica review – A star is reborn in this return to fully fledged pop
8