Online this week: The Wellness Hour with Pat Shortt, and an evening with Formula 1 stars 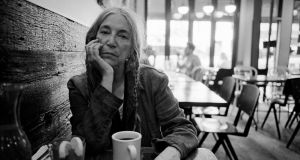 Ticket Books of the Year 2019. Patti Smith at her local coffee shop in SoHo, Sept. 11, 2019. In her new book, "Year of the Monkey," Smith, who is working toward a third act as a novelist, blends fiction and reality, conjured characters and actual ones. It’s not always clear when you’re in her imagination or out of it. (Andre D. Wagner/The New York Times) -- STANDALONE PHOTO FOR USE AS DESIRED WITH YEAREND REVIEWS -- 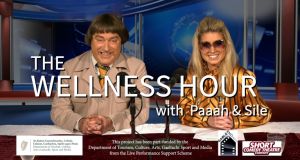 Pat Shortt: The Wellness Hour with Paaah & Sile
Saturday, February 20th, 7pm, €12, pat-shortt-the-wellness-hour-with-paaah-sile
Bet you didn’t know comedian Pat Shortt was also a world-renowned wellness guru. No, neither did we – but anyone who listens to Shortt’s new podcast, The Wellness Hour with Paaah, can attest to the healing powers of the local Tipp DJ and his supporting cast of quacks, charlatans and snake-oil merchants. Now Paaah has brought his Wellness Hour to the screen, with help from his daughter Faye, who plays reporter Sile, in this madcap melange of dodgy health advice and dubious self-improvement tips.

Patti Smith and Lenny Kaye
Saturday, February 20th, 2am $10, pattismith.veeps.com
The Earth Mother of punk teams up with her longtime collaborator Lenny Kaye for a livestream to celebrate 50 years since they first got together and jammed. Back in 1971 Smith was a budding punk poet in New York, and Kaye was a writer for such rock mags as Rolling Stone, Melody Maker and Creem, and working at a record store in Greenwich Village. When Smith gave a poetry reading at a local church, Kaye provided musical backing, and thus began The Patti Smith Group. Smith and Kaye worked together on such seminal albums as Horses, Radio Ethiopia and Easter, then reunited in 1995 and have been together ever since.

2 Mary McAleese: My ‘heart went out’ to Mary Robinson – and to Princess Latifa

7 Brexit: UK calls on EU to ‘shake off any remaining ill will’ amid fallout over North trade move

8 TV guide: 20 of the best shows to watch this week, beginning tonight

12 Colin Farrell: ‘After 20 years of drinking the way I drank, the sober world is pretty scary’

15 Laura Whitmore: ‘I’ve had enough of being trivialised and gossiped about’

17 Air to the throne: Meghan and Harry set to lift lid on royal split in TV interview

19 How will Denis O’Brien’s departure change the Irish media landscape?

21 Fintan O’Toole: The Covid-19 pandemic should be the last hurrah for Irish stoicism

22 Tin Cup: A box office hit that played its way into part of golfing fabric

24 Jennifer O’Connell: We did not need Pontins to teach us about anti-Traveller discrimination

26 Bank of Ireland closure brings out true grit in Abbeyfeale

27 Stuff happens: Why you have so much household clutter – and how to get rid of it

33 Murmuration of starlings: How our stunning front-page photograph was taken

38 Can Davy’s clients stay silent as board goes into conclave?

39 Ross O’Carroll-Kelly: ‘We’d be a lot better off if we’d remained port of Britain’