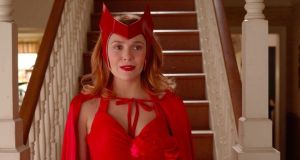 WandaVision on Disney+: Essentially, you can make any sort of story you want nowadays as long as it’s filtered through the medium of superheroes. Photograph: Disney

Here are the big telly events of the coming year (as far as I can tell from my holiday bunker):

The Lord of the Rings (Amazon)

Amazon’s upcoming Lord of the Rings series is a prequel to the prequel, that takes us back to Middle Earth’s “Second Age”. If you recognise this reference, I know when you got your first girlfriend. The answer is: “Hopefully soon.” I can say this because I too am of “the people”. Yes, I am genetically a nerd and am weirdly excited for this new production even though it seems to be based on material from JRR Tolkien’s oddball Middle Earth history book The Silmarillion which, as you know, nobody has ever finished reading, even JRR. On the other hand, you might be one of those people who, like Hugo Dyson, cried “Oh God, not another elf!” as you were reading/watching the first iteration and far preferred JRR when he was an oil magnate in Dallas. Well, I’m sorry, in this world of remakes and reboots and sequels, film-makers will never be finished with Lord of the Rings. You’ll be on your deathbed and they’ll be announcing a new 12-hour series based on some scribbles JRR did on a bar mat once or something he muttered in anger to a waiter. “Oh God, not another elf!” you’ll gasp as you expire.

10 Frost dispenses with the manual of diplomacy for NI protocol

13 New to the Parish: Abdullah Afghan and Fatima Abdullah arrived from Afghanistan via Pakistan

15 Will the new first-time buyer plan push up house prices?

17 What a work-from-home space should cost: Converted attic, garden office or spare room

25 Miriam Lord: The Bisto Kids get a taste of their own Davy gravy

27 Irish Times view on the restless state of unionism

38 Long Covid in children: New data is cause for concern, scientists say

39 Home office, home bar and scope for another home alongside for €1.55m

40 Gabriel Byrne on Weinstein: ‘He was a violent bully. He had such power’