My guide to the best and most appropriate summer things 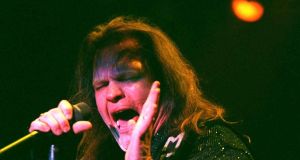 Meatloaf: “Even as a teenager I was unaccountably drawn to the soft rock stylings of sweaty middle-aged men.”

Films
The best summer film is Jaws, a political tragedy about brave Mayor Larry Vaughn’s attempt to keep a beach open and save his community’s finances from the over-regulating impulses of hysterical shark-fearing scaredy-cats. Ultimately this noble hero fails in his attempt to keep Amity Island solvent and three liberal snowflakes instead go off to kill the shark, who calls himself “Jaws”, in their boat, “Trigger Warning”. We can be thankful, once again, that such Yankee madness would never happen in Ireland. Fungie the Dingle dolphin, for example, has killed loads of people and the Kerry people have been happily covering it up for decades. He’s now an Independent councillor.

Food
It’s hard to keep up your usual rate of gorging in the summer heat, which is why HB first invented the Brunch, a tasty pebble-dashed superfood that blends two meals in one and tastes like a unicorn vomited on a pixie’s driveway. In other words: delicious. It’s also quite culturally relevant. In the popular television teleplay, Sex in the City, for example, glamorous modern women are forever discussing their trouble with New York menfolk over a delicious HB Brunch (source: Wikipedia).

Clothes
This summer men en mass have taken to the high streets and suburbs garbed in buttoned-up salmon-coloured shirts and knee length shorts and clean white runners as though this is a perfectly normal thing to do. I observe them, in my scarf, overcoat and bobble hat, shaking my head and muttering until my wife sighs and asks me what’s wrong.

Here’s the type of thing I say to my wife:

“They should go the whole hog and add bonnets, booties and giant swirling lollipops to their toddler cosplay. I mean, are they ‘toddler-kin’? What the hell, I might just wear a babygrow to work tomorrow, etiquette be damned. Perhaps I should just wear a Huggies pullup seeing as how there are no standards anymore? IS THAT WHAT YOU WANT?

When did shorts become acceptable evening costumery for grown men? Man’s legs are meant to be encased in corduroy, tweed or, at a last resort, knitted leggings. Even when swimming I wear a “bathing costume” (this is what I call “jeans”). It’s God’s law!

Yes, there are exceptions to the no-bare-leg rule: playing sport (if you must), engaging in warfare against Rommel the Dessert Fox and that one time a bee flew up the leg of Alan’s trousers (even the headmaster said his explanation was, “reasonable, if true”).

But the correct way to dress for the summer in Ireland is to dress the same as you always dress but more uncomfortably. Divesting yourself of those layers is occasionally acceptable. You may strip to the waist or rip the arms off your business shirt, Hulk style, if you must. But your legs are hot and therefore you crave less trouser? Well boo bloody hoo. My granddad used to work a farm wearing a three-piece woollen suit, you massive knee-exposing babies. You can all go to hell.”

Anyway, that’s the type of thing I say to my wife when I’m looking sad about men in shorts and she asks me about it.

Fun fact: no-one has ever seen my legs.

Songs
The best summer song is, of course, Meat Loaf’s You Took the Words Right Out of My Mouth (Hot Summer Night). This is because…

Bins
Bins are a good summer thing. I know we’re Irish and that the sudden onset of sun triggers an ancient impulse within that causes us to crawl to a waterway to deposit our eggs in the sand and moult ice-cream wrappers, but as we lie there, slackjawed in our detritus and shattered dreams, we always, always use the bins that have developed spontaneously nearby. We’re not animals, after all.

Weather-related smalltalk in the lift at work
Colleague: “Get some sun at the weekend?”

You, sunburnt and covered in blood and soil: “I did actually. I had to do a lot of…” meaningful pause... “digging.”

Colleague: “I know what you mean, a spot of gardening. Nothing like it in weather like this.”

You, licking blood off your shovel: “The heat makes me a little bit angsty, actually. Sometimes I feel like I could just…” you pause again, your eyes darting left and right…. “snap and kill everyone.”

Colleague: “Ho ho! Enjoy it while it’s there! The forecast isn’t great for next week.”

Colleague: “Want anything from the shop?” Elbowing you playfully. “An ice-cream maybe?”

Colleague, annoyed: “I said, do you want anything from the shop?”

You, thinking about what you’d like from the shop: “Some black bin bags and a HB Brunch please.”

Animals
The best summer animals are small annoyed-looking dogs who have recently had haircuts. That’s all I’m willing to say on this subject for now. Suffice-it-to-say I know a lot about small dogs and what they’re up to. But I’ve already said too much. Address any other queries to my solicitor (Meatstopher Toddlerpants, Esquire).

Ennui
We spent millennia building complex meteorological services and passage graves through which we hoped to snatch a glimpse of the sun, because when we see it, everything is going to be alright. Then it emerges and after a day or two of appreciation something nags at us. “Is that it?” we wonder. “Perhaps the problem wasn’t the lack of sun… perhaps the problem was… in our hearts?” Our therapist (Meatcliff Babytrousers, MD) thinks we’ve made a breakthrough. Everyone high fives and we pull the blinds.

Simon Cowell in surgery after breaking back falling off bike
7